'There's no stability': Worries remain for US government contractors as shutdown ends 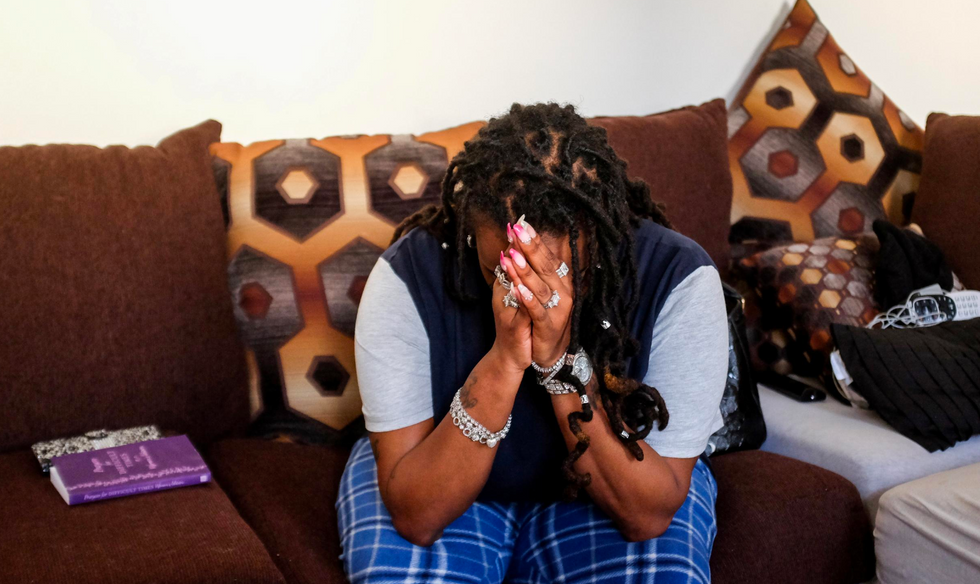 U.S. federal government contractor Yvette Hicks, whose status as a contractor means that she will receive no back pay from the 35 day partial U.S. government shutdown, cries in frustration as she talks about her situation at her home in Washington, U.S. January 25, 2019. REUTERS/Michael A. McCoy

“I had bill collectors calling me back-to-back-to-back wondering when I could start making a payment arrangement,” she said, recalling how her mood quickly changed from excitement back to worry.

Hicks, 40, a security guard at the Smithsonian National Air and Space Museum, is one of thousands of federal government contractors who do not expect to be paid for the month of work they missed during the 35-day partial shutdown - and who remain at risk if Trump and lawmakers fail to reach a more lasting agreement beyond the current three-week deal to reopen the government.

Trump, who had demanded Democrats agree to fund construction of a wall on the U.S.-Mexico border before he would agree to reopen the government, has signed legislation guaranteeing back pay for 800,000 federal employees affected by the shutdown.

Contractors, however, were not included, leaving many worried they won’t recover their losses.

Without a paycheck, Hicks began rationing her children’s asthma medication, considered cashing in a life insurance policy and prayed every day she could keep her family from becoming homeless again.

“I promised them that we would never suffer like that again,” Hicks said in an interview at her home on Friday, crying as she recalled the three years she and her four children spent without a home.

It is not clear how many federal government contract workers there are, though some estimates run into the millions.

An official with the Service Employees International Union Local 32BJ, which represents Hicks and nearly 700 other contractors, mostly security guards and janitors in Washington, said those members are among the lowest paid workers in the federal government.

When Hicks reports to work on Tuesday, it will be the first time she has been able to wear her uniform since she was hired in late December. Her first day was scheduled for Jan. 1, the same day the Smithsonian, which oversees the space museum and several others in Washington, closed due to a lack of funding.

With a book titled “Prayers for Difficult Times” on the sofa beside her, Hicks tearfully described giving her 8-year-old son and 14-year-old daughter smaller doses of their asthma medicine to make it last longer, while limiting how much time they ran and spent outside in the cold.

In a statement issued before Friday’s deal was reached, her employer, Allied Universal, said it would “provide vacation buyback for accrued time,” which is unlikely to help new hires like Hicks. It also said it provided letters to furloughed employees who were seeking to avoid late fees from creditors.

With bills piling up and uncertainty over whether the government will still be open beyond Feb. 15, Hicks said she still worries about becoming homeless again.

“There’s no stability,” she said. “How long will the government be shut down again if Trump doesn’t get what he wants?”