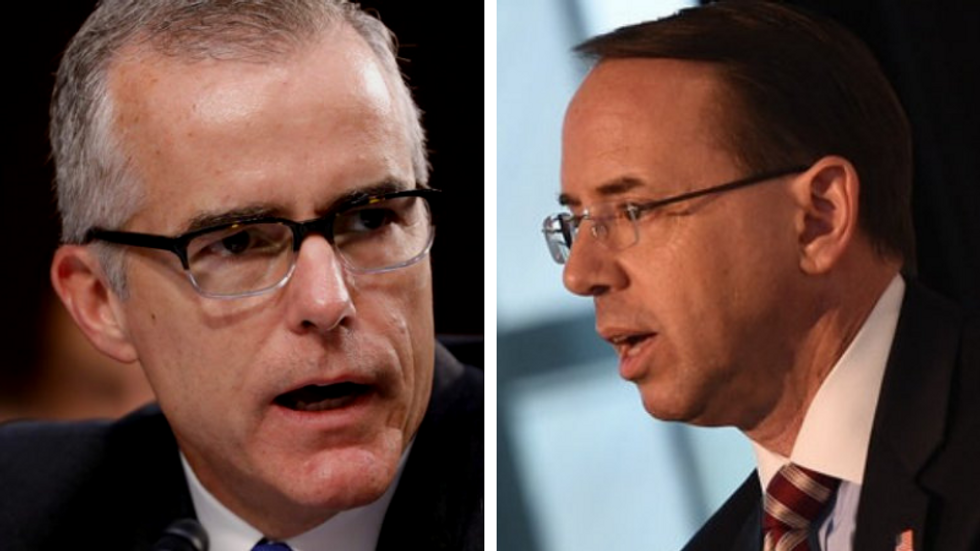 Former FBI Deputy Director Andrew McCabe said on Thursday that Deputy Attorney General Rod Rosenstein told him he knew of two Cabinet members who might support invoking the 25th Amendment to oust President Donald Trump but he did not believe Rosenstein was actively seeking support for such a bold move.

McCabe, speaking to reporters to promote his book “The Threat: How the FBI Protects America in the Age of Terrorism and Trump,” said he could not recall which two Cabinet members Rosenstein mentioned without access to memos of the 2017 conversation.

“I at no time got the impression that he had actually sought support or talked to those people about it,” McCabe said. “It was simply Rod thinking off the top of his head - this is a thing that could be done.”

In September the New York Times reported that John Kelly, who served as Trump’s chief of staff, and Jeff Sessions, who Trump dismissed as attorney general, might be persuaded to invoke the 25th Amendment. The amendment outlines how a president can be removed by the vice president and Cabinet members if deemed unable to carry out the duties of the office.

McCabe has recounted in interviews how he decided to open counterintelligence and obstruction of justice investigations targeting Trump shortly after the president fired James Comey as FBI director in May 2017. Trump later said Comey’s dismissal was prompted by his concerns about the investigation of possible ties between his campaign and Russia.

Those investigations were soon taken over by Special Counsel Robert Mueller, whom Rosenstein appointed a few days after Comey was fired. McCabe is seen as a crucial witness in the obstruction part of Mueller’s investigation, which Trump has repeatedly called a witch hunt while denying collusion.

A Justice Department spokeswoman on Thursday pointed to a department statement from last week that said based on Rosenstein’s interactions with Trump, “there is no basis to invoke the 25th Amendment” and that Rosenstein as deputy attorney general was not in a position to do so.

McCabe was fired in March of last year by Sessions after the Justice Department’s inspector general concluded he had lied to investigators about his interactions with the media. McCabe disputes that finding and his attorney said on Thursday McCabe plans to file a civil lawsuit soon challenging his dismissal.

McCabe praised Rosenstein, who is expected to depart the Justice Department in mid-March, for his decision to appoint Mueller, who could deliver a report with his findings to Attorney General William Barr soon.

“We should all be grateful to Rod for that decision,” McCabe said.