Watch: A neuroscientist explains how Trump created a cult and radicalized its members 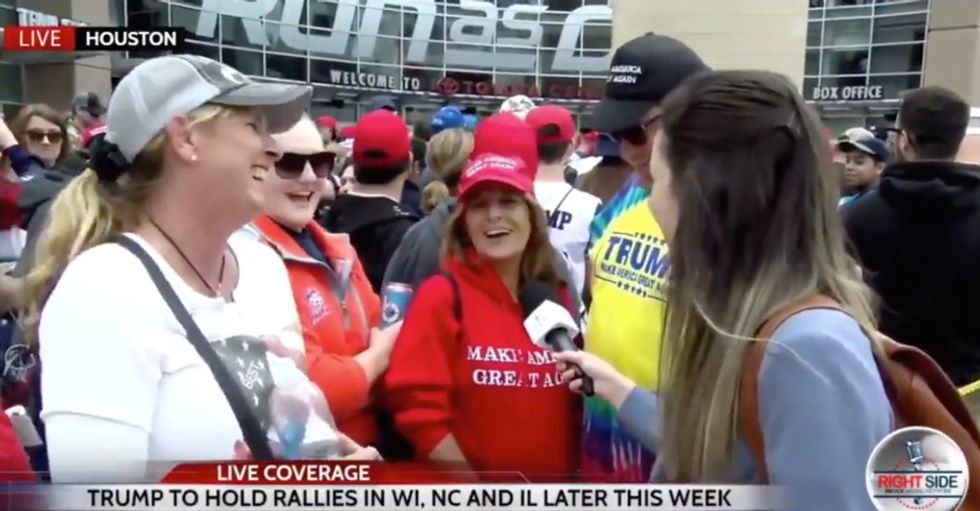 It is not inaccurate to say that Donald Trump has created a cult. Not all his supporters fall into this category, but there is certainly a subset of them that have shown they are unconditionally loyal and would follow their leader off a cliff. That kind of allegiance is dangerous. When a president is seen as a messiah who is infallible, democracy is at stake, and the threat of authoritarianism becomes real. For the cult member, no position is too extreme.

Since 2016, I’ve written about a dozen articles for websites like Raw Story, The Daily Beast, and Psychology Today, analyzing the reasons for Donald Trump’s unwavering and often fanatical support. As a journalist, and as a neuroscience and psychology researcher, I feel a moral obligation to explain this troubling phenomenon, but also to offer some potential solutions to the problem—or, at the very least, some insight that can ultimately help ease the division. At the same time, I do not believe that sugar-coating the reality and underlying psychology does society any favors. To understand a problem, we must explain it accurately and unambiguously.

While there are lots of reasons for the President’s cult-like following, I’ve come to believe that one well-supported psychology theory explains the essence of the phenomenon better than all the others. That theory is called Terror Management Theory (TMT).

A lot of people would say that it really all boils down to racism and bigotry. Others might make the same claim, but more softly, arguing that rural America is simply afraid of losing their culture, which is white Christian American culture. While I believe that there is truth to these claims, I think that the most accurate explanation goes even deeper. TMT elegantly explains the underlying cause of such cultural fears and bigotry, and when it is understood, everything that is going on right now—as bizarre as it all seems—begins to make a whole lot of sense.

TMT is based on the idea that human behavior is largely driven by our fear of death. Unlike all other animals, we have a conscious awareness of our own mortality. It is difficult to live a happy life knowing that you will someday die and not long after, all traces of your existence will be erased from history. According to TMT, as a way of dealing with this persistent existential fear, humans created cultural worldviews that instill our lives with meaning and purpose, and give us a sense of permanence.

Worldviews—like religions, national identities, and political ideologies—ease our fears and distract us from the cold hard fact that we will soon be gone and forgotten. For the average Trump supporter, Christianity serves the purpose of mitigating existential fear by providing a path to immortality through the belief in an afterlife. Being an “American” provides a path to symbolic immortality, meaning a national identity makes people feel like they are part of something bigger that will outlive the individual.

So, for many Americans, nationalism and Christianity provide a moment-to-moment defense of a deep-rooted existential fear that would otherwise cause perpetual terror. Essentially, worldviews are death-anxiety buffers.

So how do we know TMT is correct? Well, we use it to make a hypothesis and we test that hypothesis. If the theory is true, we should expect people who are presented with messages that stoke existential fears to strengthen their worldviews as a defense. Existential fear should also cause them to invest more support in those who share their worldviews while becoming more aggressive toward those who do not. This is at the crux of the Donald Trump phenomenon. By creating an atmosphere of existential fear, Trump causes his supporters to bolster their worldviews. In other words, they become more extreme Christians and Americans. By routinely describing illegal immigrants as murderers and rapists, and telling conservatives that Muslims hate America and want to destroy it, Trump is systematically radicalizing them. Existential fear is Trump’s favorite political tool, and it is the primary reason he is in the White House. The belief that Trump is some kind of Christian savior, the growing nationalist movement and the xenophobia—it can all be traced back to existential fear.

We can be sure that this effect is real because it is supported by hundreds of psychology and neuroscience experiments. For example, a 1998 study published in the Journal of Personality and Social Psychology found that writing exercises designed to conjure up thoughts about death increased aggression towards people who were critical of the participants’ political ideology. Another study, published a year earlier in the Personality and Social Psychology Bulletin found that death reminders increased nationalism and amplified racial bias.

A 2006 study found that making conservative Americans thinking about their own mortality increased their support for extreme military interventions that could kill thousands of civilians overseas. And a study published in 2017 by the co-founder of Terror Management Theory found that priming death-related thoughts directly increased support for Donald Trump. The same study found that these participants viewed immigrants moving into their neighborhood as an existential threat.

These experimental findings show that fear creates aggression, and aggression creates more fear. This establishes a self-amplifying feedback loop that leads to a kind of mass hysteria and collective anger, which is what fuels the unconditional loyalty of Trump supporters. It is also what fuels the bigotry and racism we are seeing with the nationalist movement that has swept much of rural America. It is a direct result of manufactured fear and psychological manipulation.

So now that we understand the root cause of it all, perhaps we should view Trump loyalists differently. They are not normal supporters, but more akin to cult members who have been radicalized by fear. They are, in a sense, victims. They have been brainwashed by rigid ideologies from the time of birth, and those ideologies have been weaponized by divisive politicians like Donald Trump. They are not that different from the ISIS member who has been radicalized by a fundamentalist ideology and the atmosphere of existential fear in the Middle East, created by regional instability and its occupation of outside military forces, like the U.S. army.

When existential threat looms, it creates a sweeping psychological condition that sets the stage for waves of both religious fundamentalist and far-right nationalist movements.

Do we hate the Branch Davidian members who followed David Koresh? Do we hate scientologists, and wish them ill will, or do we recognize that they’ve been manipulated—the subjects of methodical brainwashing?

The liberal party is traditionally about compassion. While we must oppose Trump, his campaign of fear, and the hateful ideology he has helped shape, we must also make a conscious effort to try and heal the division. As hard as it is, one side has to be the adult in the room. Not only will continued polarization tear the nation apart, it will make it easier for Donald Trump to get re-elected, as it energizes his base and pushes the Democrats further to the left, giving him a better chance with moderates, independents, and libertarians who can swing the vote.

The good news is that Terror Management Theory offers a solution to the division problem. If we defend against existential fear by strengthening our worldviews, then a worldview that unites us all is the obvious solution. It is unfortunate that our most popular worldviews—the major religions, national identities, and political ideologies—divide us into tribes and turn neighbors into spiritual and ideological enemies.

In the following video, I describe in greater detail how Trump has divided America using fear, citing Terror Management Theory studies, and I make the case for this new worldview, which I call the “Cosmic Perspective.” From this perspective, we are all part of an interdependent whole, united under a common existential goal—the continued survival, progress, and ultimately, the outward expansion of humanity. With the Cosmic Perspective, there is no “us against them,” there is only we. The real existential threats we face are things like nuclear war, climate change, unconstrained A.I., and the increasing centralization of wealth and power. While this might sound overly idealistic to some, I do believe it is a supremely reasonable and attainable worldview, and one that any enlightened society will eventually move in the direction of. If we all make a conscious effort to ease the division by adopting this general worldview, we can be confident that a new, stronger form of order will emerge from the current sea of chaos.

Bobby Azarian, PhD., is a neuroscientist affiliated with George Mason University and a freelance journalist. His research has been published in journals such as Cognition & Emotion and Human Brain Mapping, and he has written for The New York Times, The Atlantic, Psychology Today, and Scientific American. Follow him on Twitter @BobbyAzarian.