Chuck Todd pelts Jim Jordan: How is Mueller going to finish when you keep interfering? 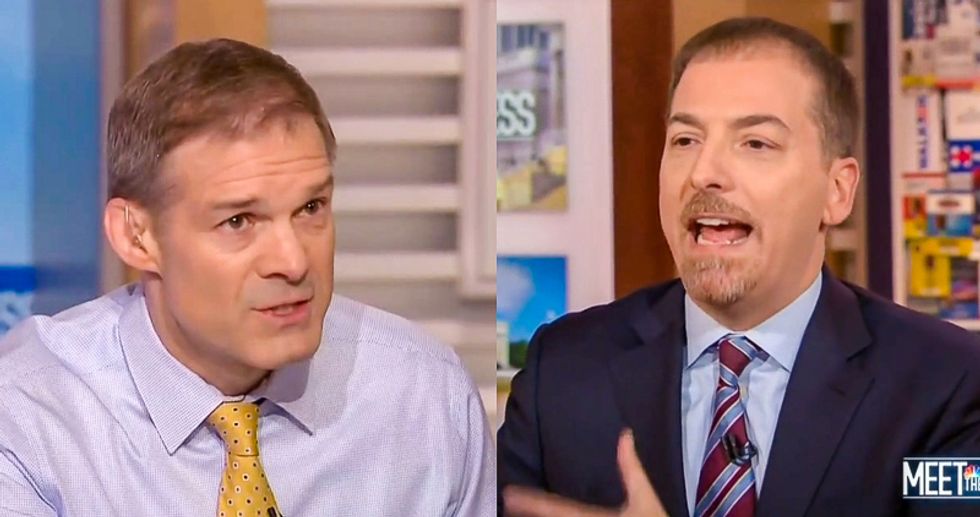 Rep. Jim Jordan (R-OH) on Sunday insisted that he has not "interfered" with special counsel Robert Mueller's investigation.

During an interview on Meet the Press, host Chuck Todd clashed with Jordan over Michael Cohen's testimony. Jordan argued that the president's former lawyer could not be believed about almost anything.

"Do you believe Michael Cohen when he said there was no collusion with Russia?" Todd asked.

"I believe a few things that Michael Cohen said," Jordan insisted. "'My name is Michael Dean Cohen.' I believe that."

"Why do you not want this investigation concluded by Robert Mueller?" Todd pressed.

"I want it concluded," Jordan replied.

"I'm not questioning and interfering with it. It can be public," Jordan said. "At some point there will be some investigation and the Attorney General Bill Barr will decide, will follow the law and release what he wants to release or maybe release the whole thing That's going to happen. We all know that."

"Who knows why they did it? But there is zero evidence," Jordan stated. "I don't know. I mean, they can do whatever they're trying to do, who knows what their motives were? What I know is there is not one bit of evidence to show any type of coordination, collusion, conspiracy whatsoever between the Trump campaign and Russia to impact the election."

Jordan went on to accuse the Clinton campaign of colluding with Russia.

"There is all kinds of evidence to show that the Clinton campaign worked with Russians to impact the elections," he said.