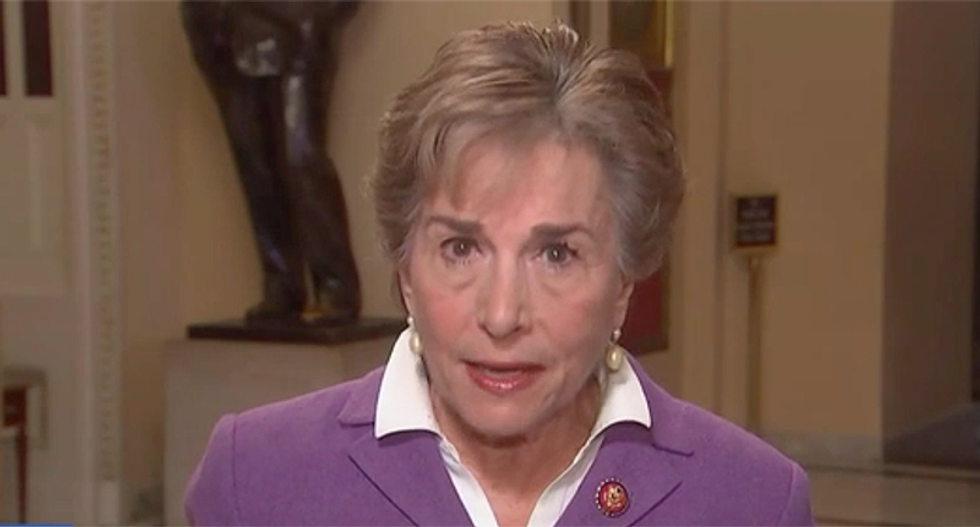 Rep. Jan Schakowsky (D-IL) warned that she hears a little panic and desperation in the voice of the president's son, Eric Trump.

In an MSNBC interview, host Hallie Jackson played a clip of a Thursday interview with Trump attacking the recent requests by House Committees to provide information. Among the requests were for any transcripts or documents of communication with Russian President Vladimir Putin.

"They are trying to make up these other things. Subpoenaing everybody under the sun," Trump said. "Guys, it's a joke. 'Please give me your transcripts of all the conversations with Vladimir Putin.' Me and my buddy Vladimir Putin, we obviously do a lot of--"

Fox & Friends Steve Doocy asked if the younger Trump has ever talked to Putin before.

"Of course not!" Trump claimed. "It's ridiculous. They're so desperate. They don't have a party."

"You know, I hear desperation," Schakowsky said after listening to the clip of the Trump interview. "I heard it in Mr. Trump's voice. But the kind of investigation that's going on is about the rule of law. It is about abuse of power that's been suggested and corruption. And we have every right as the Congress to do this kind of investigation."

She said that the committees were requesting documents that might be relevant to the investigation, regardless of Trump's personal opinions on it.

"And don't you think conversations with Vladimir Putin are relevant?" she asked. "You know, the president has talked to him privately, and we can't even get the reports at all on what they've said. And, yes, the American people want to know that."