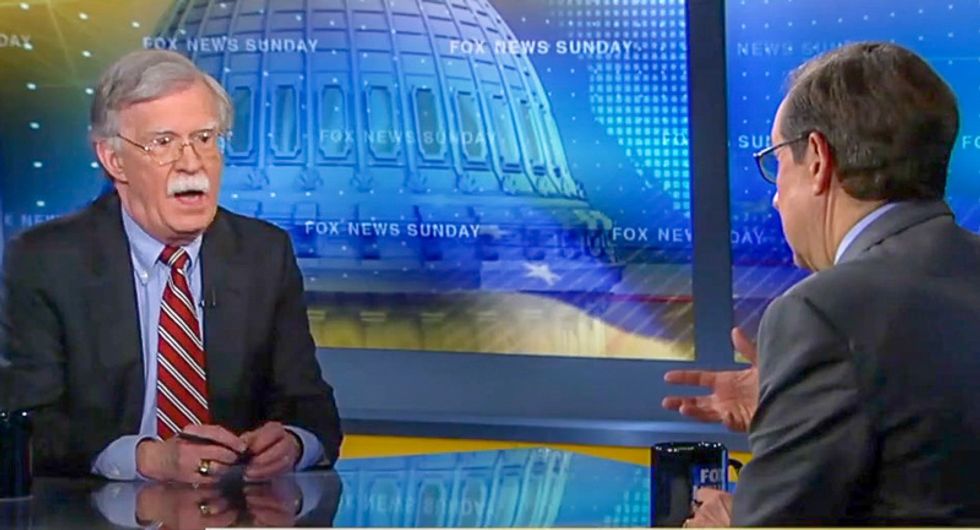 National Security Adviser John Bolton on Sunday insisted that President Donald Trump's recent summit with North Korea dictator Kim Jong-un was not a "failure" even though the U.S. was unable to secure a nuclear agreement.

Fox News host Chris Wallace spoke to Bolton about the summit in an interview on Fox News Sunday.

"Following the failed summit in Vietnam, where does diplomacy stand between the U.S. and North Korea," Wallace said.

"I don't agree at all that it was a failed summit," Bolton argued. "I think the obligation of the president of the United States is to defend and advance American national security interest and I think he did that that."

"You would agree that it's failed so far with you too?" Wallace pressed.

"After eight months!" Bolton shot back.

"Would you agree that so far this move with Kim has failed?" Wallace asked.

"I don't think we are in any worse shape than they were in past demonstrations," Bolton replied. "I think in fact we are in a stronger position because the maximum pressure campaign, as it's been called, affording tighter economic sanctions on North Korea and enforcing sanctions more effectively is what brought them to this point. The program of maximum pressure will continue and I think have a real impact on Kim Jong-un."