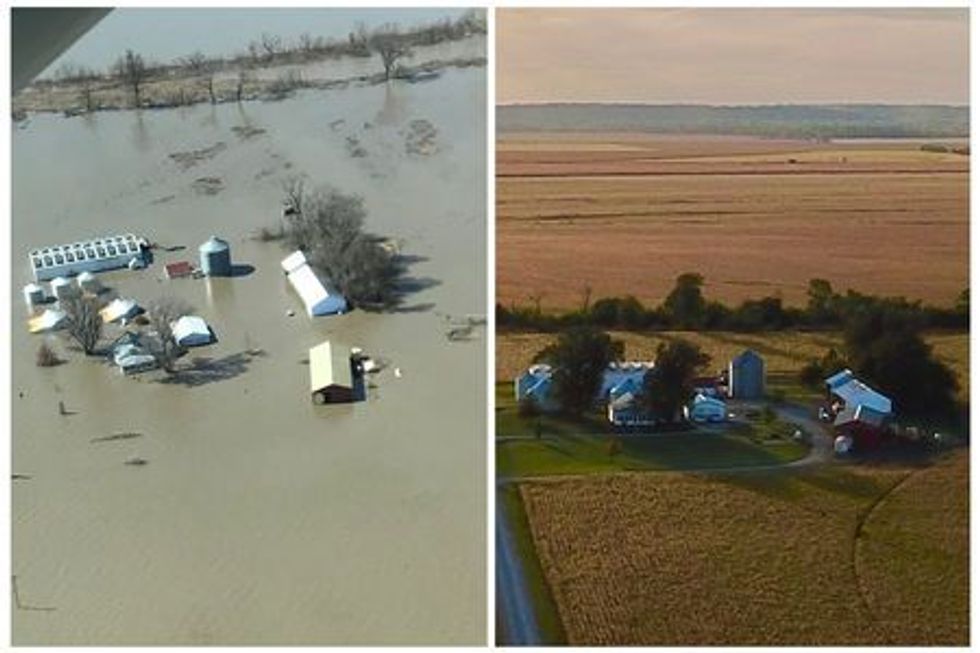 A combination of aerial photos show the farm of Richard Oswald near Langdon, Missouri after flooding March 20, 2019 and in the fall of 2018 at right. Courtesy of Richard Oswald/Handout via REUTERS.

Missouri farmer Richard Oswald needs a lot of help to recover from flooding that left his home and farm looking like a manmade island in an inland sea.

Relief groups are giving tetanus shots and handing out free meals and cleaning supplies near his farm in the Langdon-Rock Port area, about 100 miles (161 km) northwest of Kansas City. But what Oswald really needs is money.

Hit by the worst flooding in living memory, he and thousands of other farmers along the Missouri River will each require hundreds of thousands of dollars in disaster funds or loans to start over.

“The typical response on flood relief is groups like the Red Cross show up with paper towels and rubber gloves and scrub buckets,” said Oswald, 69, who does not expect to be able to get to his home or land for weeks. “The biggest thing farmers need is cash, or ways to access funds.”

Slammed by a trade war and low commodity prices, Midwest family farms have been in the red and in decline for the last five years. The number of U.S farms fell by 100,000 between 2010 and 2017, according to U.S. Department of Agriculture (USDA) data.

It is a call federal and state agencies, as well as non-governmental and faith-based relief groups are answering.

“I know we aim for bringing everything back up to where it was,” said Rosalynn Days-Austin, a USDA emergency coordinator helping direct Federal Emergency Management Agency (FEMA) efforts in flood-affected areas. “Sometimes that’s not always possible, for a variety of reasons, but the goal is definitely to help them bounce back from their loss.”

Relief groups like Farm Aid are tending to the immediate needs of farmers, distributing tens of thousands of dollars in “emergency grants” - $500 gifts from cash donations that help families pay for things like groceries. After that, the group and its partners advise farming families on how to access federal disaster funds they hope are coming soon.

“What we’re hearing, because of the snowpack and rain and the wet ground, is that farmers are going to be dealing with this throughout the spring. So we’re in it for the long haul,” said Jennifer Fahy, a spokeswoman for the group established by country singer and activist Willie Nelson.

The Evangelical Lutheran Church in America (ELCA) is coordinating a long-term response to get displaced families housed, navigate the red tape of insurance companies and federal agencies and tend to the mental health needs of people who have suffered extreme trauma, said Bishop Brian Maas.

“We have national partners and coalitions within the state,” said Maas, who is asking people to hold off donating more material goods, for now. “There will be stresses because we’ve not done anything of this magnitude.

“Now we have mountains of cleaning supplies and so forth that can’t be used,” Maas said, appealing to people to get back in touch in a month to see how they can donate then. “Cash is the most flexible way to respond.”

Another immediate need is feed for livestock.

Relief organization Farm Rescue is collecting donations of hay in the Dakotas and trucking it to farmers whose cattle are starving after their feed stands were submerged in floodwater.

“I don’t know of anything this widespread that has ever affected so many people in our service area,” said Dan Erdmann, a spokesman for the group which helps family farms get through crises ranging from natural disasters to medical emergencies.

Farm workers, some of them undocumented and legal migrants, have been hit hard. Lutheran Family Services of Nebraska is looking at housing assistance for displaced people who previously paid around $300 a month rent and now face rents triple that due to a dearth in properties, said Stacy Martin, chief executive of the social services charity.

While relief groups tend to urgent needs, farmers like Scott Olson say more federal relief money is needed at a time when low crop prices and high debt levels are limiting farmers’ access to credit. He is counting on a farm relief bill in Congress for extra disaster compensation after he successfully lobbied in Washington for similar funds following 2011 flooding.

“Flood insurance isn’t going to cover this worth a darn. FEMA is worthless,” said Olson, who farms 3,000 acres near Tekamah, Nebraska and runs a farm equipment business. “They don’t have any money, nobody has any money.”