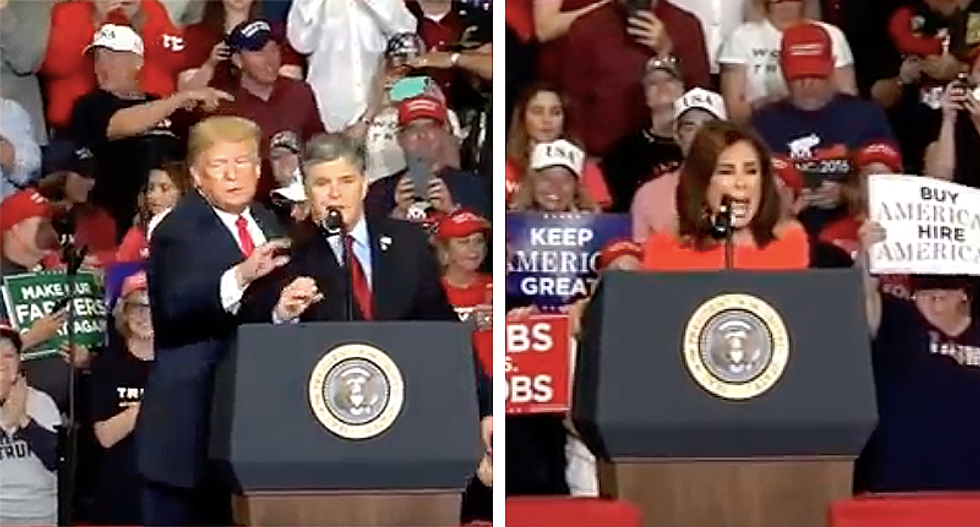 President Trump stood in the White House Rose Garden this week with President Jair Bolsonaro of Brazil, beaming from ear to ear as this fellow right-wing demagogue parroted Trump's favorite catchphrase, "fake news," in front of the assembled White House press corps. Trump said he was very proud to hear Bolsonaro use the term and went off on an extended rant against social media, promising to "do something about it."

Trump complained again last weekend about "Saturday Night Live" mocking him, and suggested that the FEC and the FCC look into stopping them. His top henchman in the House of Representatives, Rep. Devin Nunes of California, just this week filed a $250 million lawsuit against small-time Twitter parody accounts that made fun of him (most famously, one allegedly written by a cow) and Donald Trump Jr. is writing op-eds complaining about Twitter and Facebook censorship.

The "fake news" charge is nothing new, of course. Trump has used the phrase even more than "no collusion" and "witch hunt" over the past two years, clearly trying to indoctrinate Americans into believing that they must believe him and his allies and no one else. He has said it outright:

Stick with us. Don't believe the crap you see from these people, the fake news. ... What you're seeing and what you're reading is not what's happening.

The attack on social media stems from a daft conspiracy theory that holds the various platforms are censoring conservatives. It's not true. Right-wingers simply don't know how the internet works and thrive on victimization and conspiracy theories, so this fits in nicely with their worldview. Attacking satirists and humorists for being disrespectful to people who are in power, as Trump and Nunes are doing, is a new thing -- and a direct attack on the First Amendment. It is obviously designed to intimidate critics into silence. Trump is known for doing that.

But for all the complaining about bias and fake news, there actually is a plethora of right-wing propaganda on the internet and we've seen its disastrous results, with the burgeoning international white identity movement using it for inspiration and organization. The Christchurch shooter was steeped in it and obviously drew much of his murderous ideology from participating in chatrooms and online forums.

Even Fredrick Brennan, the 25-year-old creator of the website 8chan (who cut ties with it in December) has expressed regret, saying, “It was very difficult in the days that followed [the New Zealand massacre] to know that I had created that site.” He told the Wall Street Journal he believed it could happen again.

As dangerous as these propaganda outlets are, and as much necessary attention as we pay to Facebook algorithms and Twitter bots, they really aren't the major propaganda tools responsible for the political culture that resulted in President Trump. His hold on his true believers, who number in the tens of millions, isn't a consequence of his Twitter feed. The medium he has truly mastered, and which seems to have the greatest influence on the people who love him, is good old-fashioned television.

New polling by a group called Navigator,  published by the Daily Beast, shows that Fox News viewers hold very different views than everyone else. Indeed, they seem to be indoctrinated just as thoroughly as those 8chan posters. The poll surveyed more than 1,000 registered voters to determine the beliefs of people who watch Fox News compared them to people who don't. The portrait that emerges shows a group of people who took Donald Trump to heart when he said, "Stick with us, don't believe the crap you see from the fake news."

The authors conclude, "There is an alternate reality in American politics, and it plays an outsized role in the way many experience and form opinions on the most important issues facing the country."

Another word for this alternate reality is propaganda. One can see this most clearly in this one finding. Among Fox News viewers, the authors write, 78 percent "believe the Trump administration has accomplished more than any administration in history," compared to 17 percent of all other people.

This is an absurd belief, but it's one that is constantly promoted by Fox News and the president himself in the feedback loop between the network and the White House. The Trump base believes this despite there being no evidence at all, in the real world, that it is true.

There has been interesting reporting by Gabriel Sherman at Vanity Fair in recent days about changes at Fox as Lachlan Murdoch steps up to take over the empire. Fox Corp. just began public trading as the new parent of Fox News, following the sale of the 21st Century Fox film and TV division to Disney. Apparently the younger Murdoch isn't too keen on Fox News' role as de facto Trump TV. There are rumors that some of Trump's most vociferous supporters might be leaving the network, Sean Hannity being the most likely.

Trump himself has been pushing hard from his Twitter feed for Fox to keep the faith, obviously exhorting his loyal followers to push the network to stay on the team:

At the moment, Trump has a stranglehold on the Republican Party and its voters. Even if Fox were to change direction, there's no way to be sure that Trump supporters' alternate reality wouldn't be maintained by conservative talk radio and online propagands. But it's doubtful. Fox is by far the most important influence on Trump's most loyal voters, particularly the older, white faction that makes up such an important part of the GOP base. These are not the people deeply enmeshed in the trolling, "shitposting" culture of the online right. They are just standard right-wingers who have been deeply infused with nonstop Trump fanfiction for the past three years.

Political reporters often say that Republican officials are stymied about how to wrestle the GOP base away from Trump, and that his popularity keeps the party's leading figures under his thumb and unable to fight back. What profiles in courage they are.  But they may be saved by the Murdochs. If Lachlan decide to sell the new, much smaller Fox Corp., as is widely believed to be the plan, Trump could lose his most important propaganda arm. Whether his followers can ever be deprogrammed remains to be seen but it will definitely never happen unless Fox News changes its tune.