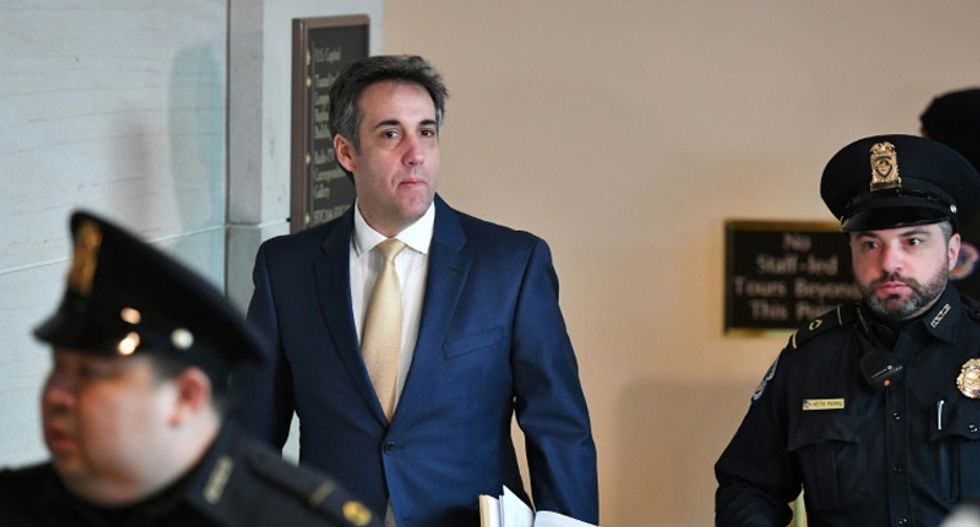 President Donald Trump's ex-attorney will return to Congress next week for more testimony, US lawmakers said Thursday, after three days of marathon appearances during which Michael Cohen accused his longtime boss of being a conman engaged in illegal activity.

House Intelligence Committee chairman Adam Schiff also revealed that Felix Sater, a Russian-born real estate developer who claims strong connections to the Kremlin, and who reportedly pitched the Moscow Trump Tower project to Trump's team, will testify before the committee on March 14.

The public hearing is believed to be the first scheduled appearance before Congress for Sater, who once had an office in Trump Tower and is seen as a mysterious figure who could shed light on dealings between the Trump organization, his campaign and Russia.

Cohen meanwhile will return on March 6 for additional closed-door testimony to the Intelligence Committee, Schiff said.

"It was a very productive interview today, where he was able to shed light on a lot of issues that are very core to our investigation, and we were able to drill down in great detail," Schiff said, adding that he intended to publicly release transcripts of Cohen's testimony "at the appropriate point."

News of the upcoming hearings came after Cohen's grueling three days on Capitol Hill, including his explosive nationally televised testimony on Wednesday, during which he called Trump an inveterate liar, "racist," and "cheat."

Cohen -- who is to report to prison on May 6 to begin serving a three-year sentence for fraud, tax evasion, illegal campaign contributions and lying to Congress -- expressed regret for his years of devoted service to Trump.

He also said Trump knew in advance in mid-2016 that WikiLeaks would publish emails stolen by the Russians from rival Hillary Clinton's campaign.

And Cohen asserted that lawyers for Trump and his family reviewed and edited his written testimony to Congress in 2017 in which he lied about the Moscow real estate deal.

Nevertheless, Cohen produced no fresh evidence that Trump or his campaign colluded with Russia during the election, the subject of an investigation by Special Counsel Robert Mueller.

Speaking in Vietnam after a summit with North Korea's Kim Jong Un, Trump sought to discredit Cohen, saying his former lawyer and fixer had "lied a lot" -- although not about "one thing."

"He said, no collusion with the Russian hoax," Trump said. "And I said, I wonder why he didn't lie about that, too, like everything else."

The president did not address any of Cohen's specific, explosive allegations about his decade of working with Trump.

On Thursday, two Republicans on the House Oversight Committee said they had petitioned the Justice Department to investigate Cohen for perjury.

They alleged that he lied in Wednesday's testimony about his alleged desire to get a job in the Trump White House, and about whether he had committed bank fraud in the past.

"Mr. Cohen testified truthfully before the House Oversight Committee.... He also backed up much of his testimony with documents," Davis said, calling the complaint "baseless."

- 'Our boy can become president' -

As for Sater, lawmakers will seek to quiz him on his dealings with the Trump Organization and the campaign.

Sater has boasted of his ties to Vladimir Putin, saying he could get the Russian president to say "great things" about Trump, and suggested that the Trump Tower deal would help him get elected.

"Our boy can become president of the USA and we can engineer it," Sater wrote in a November 2015 email quoted by The New York Times.

"I will get all of Putin's team to buy in on this, I will manage this process."

Cohen has testified that Trump was negotiating on the Moscow building deal in 2016, contradicting Trump's repeated declarations during the presidential campaign that he had no business ties to the country.