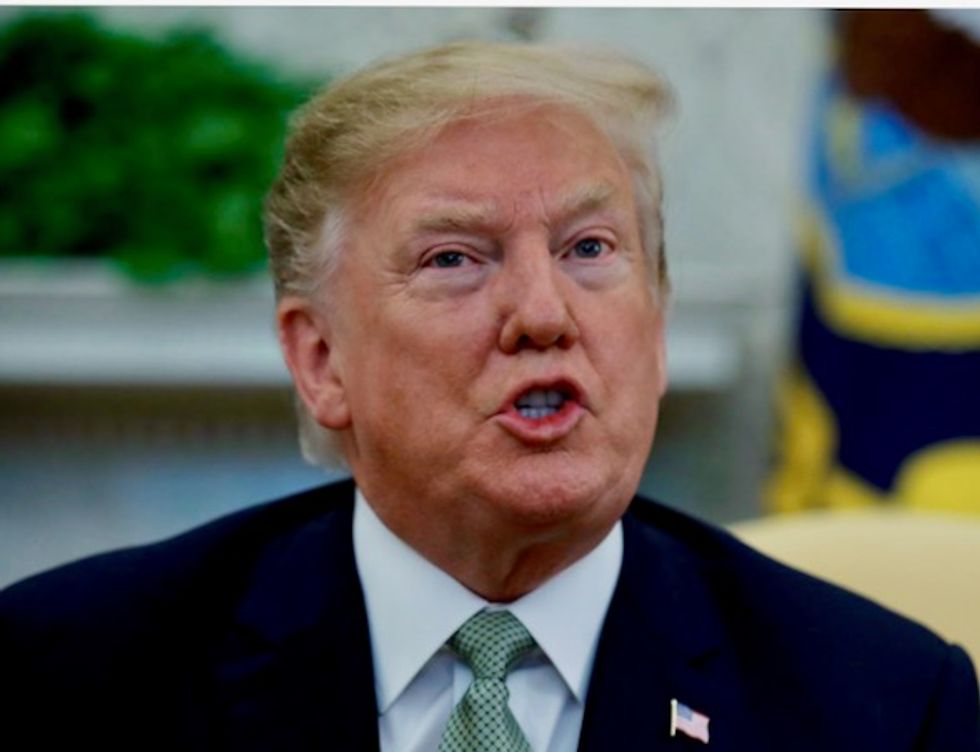 President Donald Trump has drawn criticism for downplaying the white nationalist ideology that led a gunman to kill over 50 people in New Zealand. The killer cited Nazism and Donald Trump in a manifesto and online video while murdering worshippers at two Mosques in New Zealand.

Although Trump sent his condolences, he chalked up the attack to a small number of individuals with problems rather than the demonization of immigrants and refugees. In fact, in the same press conference in which he addressed the attacks, Trump also described immigration at the Southwest border as an invasion.

In addition to his refusal to condemn the Nazis who marched on Charlottesville, Trump's reaction to the New Zealand massacre once against raised doubts about his leadership and his fitness for office.

Raw Story spoke with Dr. Bandy X. Lee, a psychiatrist at Yale School of Medicine who has taught at Yale Law School for over 15 years and has consulted with the World Health Organization on violence prevention since 2002.

She edited the New York Times bestseller, “The Dangerous Case of Donald Trump: 27 Psychiatrists and Mental Health Experts Assess a President,” to be released in an expanded edition on March 19, 2019—the same day as a major, interdisciplinary conference on presidential fitness, sponsored by the World Mental Health Coalition, of which she is now president (for more information on the conference, go to: dangerouscase.org).

Raw Story: You have been warning about the dangers of this presidency since the beginning, and now your bestselling book is coming out with a new edition. Do you feel differently about the dangers since you first put the book together two years ago?

Dr. Bandy X. Lee: Actually, no. It gives me no pleasure to say that the dangers have manifested and increased exactly as we foresaw, according to the timeline we estimated, and now our greatest fear seems to be coming true: that the pathology he spreads in society would eventually render society incapable of containing him, even if it were to recognize that he is dangerous, which it is beginning to do.

But recognition is falling too far behind the realities, in spite of many people speaking up now, including Yale Law School graduate George Conway, who said: “Whether or not impeachment is in order, a serious inquiry needs to be made about this man’s condition of mind.” He is right—it is a separate issue and a dangerous one to continue pretending it is all political strategy.

Raw Story: Can you talk about the massacre in Christchurch, New Zealand, and the President's response?

Bandy X. Lee: The recent white nationalist shooting at a mosque, while declaring “common purpose” with Mr. Trump, is an example of the adverse outcomes of having a dangerous individual in a high office and what we will be discussing at the conference. It is not unrelated to North Korea’s threat to resume nuclear testing—which we predicted also—as soon as Mr. Trump revealed that he was not really interested in peace talks but in the accolades they bring, which have now abated.

This is all on top of the unprecedented spikes in hate crime, widespread schoolyard bullying in his name, a rise in white supremacist killings, record mass shootings and gun murders, and the recent “pipe bomber” who sought to assassinate all major Democrats and critics of Mr. Trump. It follows what we know about violence: social and cultural changes cause violence in ways that are not explainable through individual risk factors alone. Violence is predictable and preventable, especially at societal scale. Mr. Trump’s rhetoric and conspiracy theories, propagated from an influential position, are some of the most powerful ways of laying down the groundwork for violence.

Raw Story: Can you really blame Trump for a mass killing just because the gun man invoked him though?

Bandy X. Lee: One does not have to commit violence oneself to have it be carried out. As pressures mount from the impending special counsel’s report, numerous House investigations, and a slowing economy and job growth, Mr. Trump did not hesitate to say: “I have the support of the police, the support of the military, the support of the Bikers for Trump—I have the tough people, but they don’t play it tough—until they go to a certain point, and then it would be very bad, very bad.”

Henry II did not have to lift a finger to have his followers assassinate the Archbishop of Canterbury. All he said was: “What miserable ... traitors have I nourished and promoted in my household, who let their lord be treated with such shameful contempt by a low-born clerk!” Those in influential positions do not need to give explicit orders for their supporters to get the point and execute what they want done.

What is most ominous—and the most telling sign of collective pathology—is the extents to which followers will go to explain away empirical evidence or discount what they see before their eyes. It is like climate change: no amount of settled science or visible signs in the form of natural catastrophes will convince the mind to turn away from beliefs it invests in—not even death or the extinction of the species. And the complexity of reality means that there is always some level of doubt one can always cling to.

This is how powerful the human mind is, and how delusions (fixed false beliefs) and psychosis (losing touch with reality) are possible. When House Majority Leader Nancy Pelosi says she wants the evidence to speak for itself, rather than pursue impeachment, it seems like a sensible political strategy, but it is oblivious to the dangerous pathology we are witnessing and what can happen between now and the next election.

Raw Story: What do you hope to accomplish at your conference?

Bandy X. Lee: It's an unprecedented conference for unprecedented times. There has probably never been a conference where 14 top experts across such diverse fields urgently came together on a single panel, let alone the unprecedented topic. Also, it is open to the public and for the public. From nearly all walks of life and from every disciplinary perspective, the adverse impacts of Mr. Trump’s mental impairment, such as an inability to have empathy when so many lives depend on him, are undeniable. We are in uncharted territory where the greatest injury to our nation is being done by our own leader. Panels like this and other multidisciplinary efforts are essential to shed light on the ways the president’s actions have harmed and continue to harm the nation, and to find ways to minimize the damage.

Dealing with the social, cultural, economic, and political conditions that worsen mental health is far more effective than trying to treat one individual at a time only after they have fallen ill and are suffering. Currently, the problem has become bigger than what any one field can handle. We have to first “diagnose” the problem, but because it is so large scale, multiple fields must share their knowledge across boundaries and with the public for this to be possible.

Raw Story: Who's featured, beyond mental health professionals? And what about the so-called Goldwater rule, which posits that it's unethical for psychiatrists to give a professional opinion about public figures the haven't personally examined?

It's important to note that Mr. Trump is not our patient; society is our patient. A Washington reporter said to me, “The American Psychiatric Association did a very effective PR campaign” in getting the Goldwater rule to become a household phrase. The first thing even a layperson says is, “How can you know what you do without having examined the president?“

The truth is, there is a lot we can know, especially with respect to dangerousness, and you have to consider whom and what the Association was working for when it created the new Trump rule (the “gag rule”) so shortly after inauguration. The effect was to stop psychiatrists from meeting their primary responsibility to society—there is no primary responsibility to a public figure, but there is to society—and to deprive the American people of critical information at a critical time. And panelists are in the fields of law, history, political science, economics, social psychology, journalism, philosophy, nuclear science, and climate science. Dr. Jerrold Post and I are the only psychiatrists.

I have more than a duty to warn and to protect society, for as my primary responsibility, according to our code of ethics, I must care for its entire wellbeing. Public health approaches, which involve multisectoral collaboration, are what I have applied over my 20-year career in violence prevention, and that is the approach we are taking at the conference. Mr. Trump as a violence risk factor is no different than widespread lead contamination in the environment giving rise to increased rates of violence as it compounds other risk factors.

Registration is free and available online through dangerouscase.org.