Border militia vigilantes vow to patrol until ‘that wall is up’: report 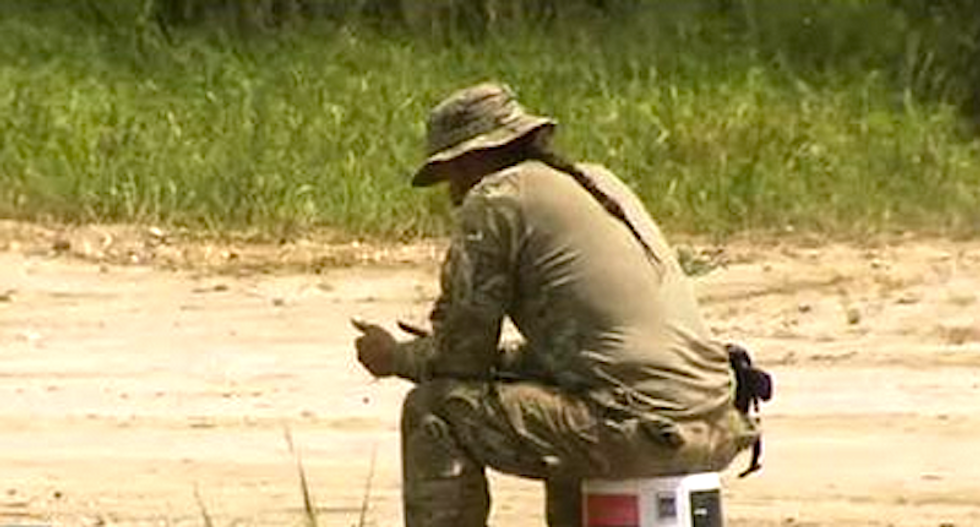 Member of a right-wing militia in Texas (KRGV-TV)

In the southeasternmost pocket of the US state of New Mexico, with El Paso, Texas, to the east and Mexico a stone's throw south, there is a small camp: a few tents and a weathered trailer.

It is home to the half dozen or so members of the United Constitutional Patriots (UCP) -- a small but well-armed militia dipping their toes into the US border vigilante movement.

In recent months, thousands of migrants have arrived in Mexico, primarily Central Americans fleeing poverty and violence at home.

US President Donald Trump has described them as a threat to national security, demanding billions of dollars from Congress to build a wall on the southern border.

The resignation of Trump's Homeland Security Secretary Kirstjen Nielsen on Sunday, reportedly over the president's push to restart family separations at the border, has underscored his failure to get to grips with the issue.

And until the wall is built, the UCP insist they will be there.

"We're here to assist the border patrol because they are so short handed," the group's leader, 70-year-old "Striker," told AFP.

Based out of Flora Vista, New Mexico, the group -- made up mostly of older veterans -- enjoys an enthusiastic social media following. Striker can be heard fielding calls during lengthy radio broadcasts streamed online several times a week.

And if you want to sign up to "uphold and defend the constitution?" Just give pick up the phone.

Out in the field -- with tactical gear, rifles and even custom patches -- the UCP say their duties include watching the border, standing guard over people who want to hand themselves in to border patrol and pursuing those who don't.

"It's kind of no different than if you were to have citizen's arrest powers, if you will," Jim Benvie, a 43-year-old from Minnesota, told AFP.

Benvie explains that they use the term "surrender" because border patrol rules only allow them to "observe and report."

In a statement, the US Border Patrol said it "does not endorse private groups or organizations taking enforcement matters into their own hands."

And according to the Anti Defamation League's Mark Pitcavage, an expert on right-wing extremism, the UCP's bark is much bigger than its bite.

"These guys, even more than some other militia or vigilante groups, seem to be living in a fantasy world of their own," he told AFP, adding that they have been active for around two and a half years.

"They have this grandiose vision of themselves as protecting America from the drug cartels," he said.

However, he added: "It's ironic that the areas where they seem to have chosen to focus ... is a very highly guarded stretch of border."

Pitcavage points to the rights to bear arms and assemble peaceably enshrined in the US Constitution.

"And if this is a simply a combination of those, can the government actually prohibit this seemingly constitutionally protected activity?" he said.

The border vigilante movement is well-established, with the Southern Poverty Law Center documenting "questionable apprehensions of migrants by private citizens" from as far back as 1999.

Pitcavage acknowledges that the movement is grounded in anti-immigrant sentiment but says white supremacy among followers is actually minimal -- and he sees no such elements within the UCP.

"Countries having borders is not racist," was member Jim Benvie's take.

"It's not about race. We have Latinos that work on our team with us."