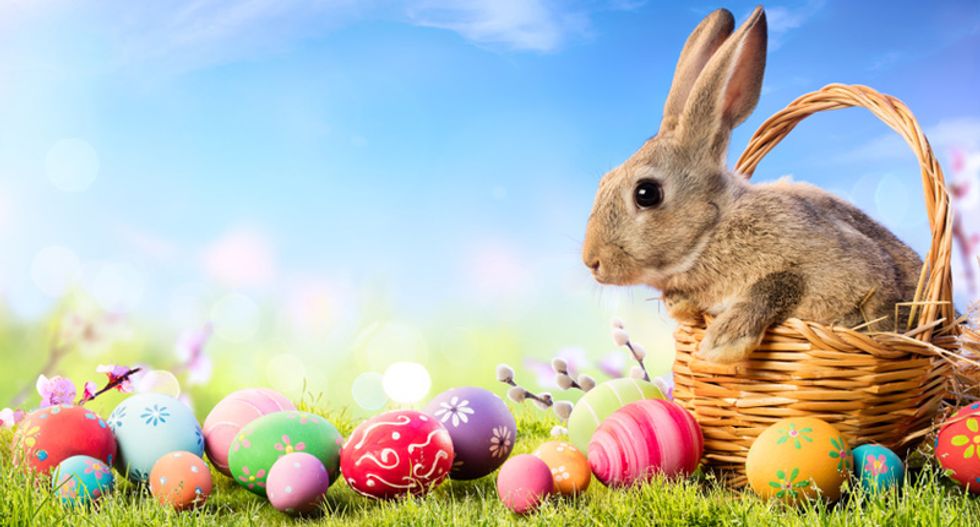 There’s a lot of confusion about Easter – not least because this most important of all Christian festivals moves around so much from year to year, decided by a complex set of calculations based on the vernal equinox and the phase of the moon. Easter symbols – eggs, bunnies, lambs and the rest – give the festivities an air of pre-Christian paganism.

So where do the origins of Easter and the rituals observed by so many – whether Christian or not – really lie?

The first mention of Eostre is in the eighth century, in The Venerable Bede’s frustratingly cryptic account of the native Anglo-Saxon calendar in De Temporum Ratione (On the Reckoning of Time). The Anglo-Saxon equivalent of April called Eostremonath is named for the goddess Eostre – but we only know about Eostre via Bede’s writings and the only thing he tells us about her is that “feasts were celebrated” in her honour. So, if modern Easter is frequently a festival of overeating, this has tradition on its side.

But Eostre was evidently significant enough for the Anglo-Saxons to later transfer her name to the Christian festival of the resurrection rather than adopting the Latin name “Pascha”.

Similarly, Easter is “Ostern” in German – which implies she must have been known outside England. Confusingly, the great 19th-century folklorist and philologist, Jacob Grimm, invented a German goddess called Ostara – “the divinity of the radiant dawn, upspringing light, a spectacle that brings joy and blessing” – on purely etymological grounds: the name is derived from a proto-Indo-European root meaning “to shine”. But Grimm didn’t present a shred of supporting evidence that such a deity had ever been worshipped in Germany, leaving us with just Bede to go on.

Easter roughly coincides with the spring equinox – so there is a good deal of lore attached to the season which is not actually Christian. Easter is preceded by Lent – a period of fasting in memory of Christ’s 40 days in the wilderness. But it is also a season when, in pre-modern Europe, food would have been running low. Winter supplies would have been coming to an end and there was not enough sun and spring growth yet for hens to start laying and cows to give milk. In a sense, therefore, Easter is a natural feast – to celebrate passing out of that hardship.

The association of lamb with Easter is something we have borrowed from Jewish tradition and Passover – which was also the festival that Jesus and his disciples celebrated with their Last Supper.

At least as far back as the 15th century, Easter was also marked in England by eating “tansies” – a kind of custardy pudding made with the bitter (and poisonous) herb tansy and sometimes with other bitter greens such as nettles. The 17th-century antiquarian John Aubrey adds a further detail:

Our tansies at Easter have reference to the bitter Herbs [eaten at Passover by Jews] though at the same time ’twas always the Fashion for a man to have a gammon of Bacon, to shew himself to be no Jew.

Eggs are an ancient and natural symbol of returning life in many parts of Europe, but the Easter egg may also derive from Passover – which includes, among various symbolic foods, a roasted egg: the beitzah. Until at least the mid-20th century, more people marked Easter with decorated, hard-boiled hen’s eggs than chocolate ones.

The earliest documented mention in England of decorated eggs comes in 1290, from the household accounts of King Edward I for 1290, which records the purchase and decoration of 450 eggs , some gilded, some dyed. These eggs were presented to the royal household at Easter, and cost 18 pence.

In many parts of Britain the custom was for people, children especially, to play with their “pace-eggs” by rolling them down a chosen slope before eating them. In Iona and Peter Opie’s 1959 study The Lore and Language of Schoolchildren, a child reports that: “In Cumberland we take more notice of the pace eggs than chocolate eggs.” Easter eggs as also rolled on the lawn of the US White House, a custom going back to 1878.

In southern Germany, children used to be told that a hare laid the pace-eggs and they would make a nest for the creature to lay them in. The Easter hare was also known in parts of the British Isles and was particularly associated with having to hunt out eggs hidden in the garden, where the hare was supposed to have put them.

A curious entry in the Calendar of State Papers for April 2 1620, suggests that hares were also often eaten at Easter:

Thos. Fulnety solicits the permission of Lord Zouch, Lord Warden of the Cinque Ports, to kill a hare on Good Friday, as huntsmen say that those who have not a hare against Easter must eat a red herring.

Hares were also ritually hunted at Easter in England – there is a note in the Chamberlains’ Accounts for the year 1574 that twelvepence was “given to the hare-finders at Whetston Court”.

So the truth is that Easter rituals as we know them today represent an untidy collection of customs connected with celebrating spring growth and the end of austerity – a time for new clothes and rich food. Any connection with pre-Christian paganism is entirely coincidental.An Easter hare hunt survived as part of Leicester’s ritual year as late as the 18th century, though by then a dead cat was substituted for an actual hare. Jacob Grimm, looking at this evidence for an association of ritual activity involving hares with the Easter season, conjectured that the hare was sacred to the goddess Ostara, piling one conjecture on top of another.