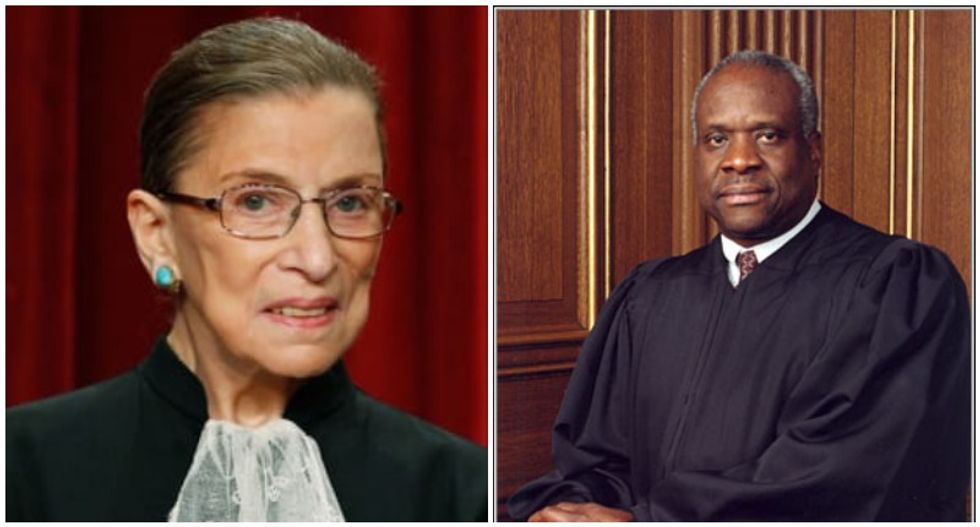 Supreme Court justices Ruth Bader Ginsburg and Clarence Thomas took shots at one another in dueling footnotes to a ruling on a pair of Indiana abortion laws.

The court declined to take up a ban on so-called "discriminatory" abortions based on a fetus' expected race or disability that had been struck down by the U.S. 7th Circuit Court of Appeals, but reversed a ruling that struck down a law governing the disposal of fetal remains.

Thomas griped in a footnote that Ginsburg's dissent in the fetal remains ruling, which was signed into law by Vice President Mike Pence while he was governor of Indiana, "makes little sense" because he disagreed that the case was a "waste" of court resources.

"JUSTICE GINSBURG does not even attempt to argue that the decision below was correct," the conservative justice complained. "Instead, she adopts Chief Judge Wood’s alternative suggestion that regulating the disposition of an aborted child’s body might impose an 'undue burden' on the mother’s right to abort that (already aborted) child."

"This argument is difficult to understand, to say the least," Thomas added, "which may explain why even respondent Planned Parenthood did not make it.

Ginsburg fired back at Thomas in her own footnote.

"A woman who exercises her constitutionally protected right to terminate a pregnancy is not a 'mother,'" Ginsburg wrote. "The cost of, and trauma potentially induced by, a post-procedure requirement may well constitute an undue burden ... under the rational-basis standard applied

below, (and) Planned Parenthood of Indiana and Kentucky had no need to marshal evidence that Indiana’s law posed an undue burden."