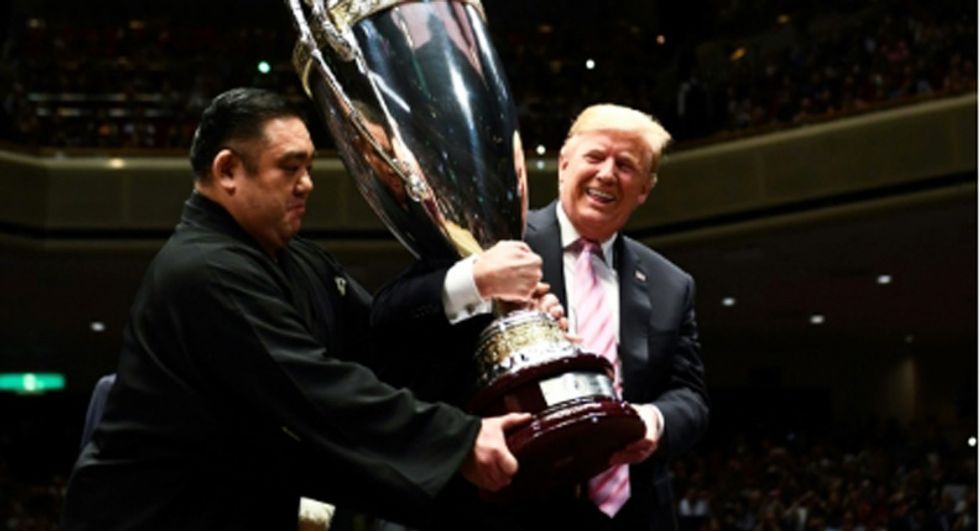 US President Donald Trump Sunday downplayed recent North Korean missile launches as he teed off a state visit to Japan with a round of golf and a trip to the sumo with Prime Minister Shinzo Abe.

Before his official schedule began, Trump tweeted that North Korea had tested "some small weapons" that had "disturbed some of my people, and others, but not me".

This appeared to be a reference to US National Security Advisor John Bolton, who said Saturday there was "no doubt" the launches had contravened UN Security Council resolutions.

But Trump said: "I have confidence that Chairman Kim will keep his promise to me."

The American president maintains that North Korea's leader Kim Jong Un has pledged he is serious about denuclearisation, although experts say there is still a wide gulf between the two sides over what that means.

Trump and Abe's talks are expected to touch on tensions with Pyongyang, which have mounted after a summit in February in Hanoi collapsed without an agreement, and trade negotiations as Tokyo and Washington attempt to thrash out a deal.

On trade, Trump tweeted that "great progress" was being made but "much will wait" until after Japanese upper house elections expected in July -- with rumours rife Abe might also call a snap general election at the same time.

The serious diplomacy starts on Monday, when Trump will be the first foreign leader to meet Japan's new emperor, Naruhito, who has been on the Chrysanthemum Throne for less than a month following his father's historic abdication.

Sunday was about cementing diplomatic bonds between the two countries through the leaders' shared passion for golf and a chance for Trump to see one of Japan's most famous sports -- sumo.

Trump entered the hallowed Ryogoku Kokugikan sumo stadium to loud cheers -- and a few scattered boos -- with spectators standing to take photos as the US president waved and smiled.

Front-row seats at the sumo are usually on the floor, but the two couples were given modified seats with backs, and were ringed by security personnel.

Trump looked serious as he listened to explanations from Abe and others around him about the bouts between the sport's top wrestlers.

The US leader then presented tournament winner, Japanese wrestler Asanoyama, with the "President's Cup," a specially made trophy weighing 60-70 pounds (27-32 kilograms) and measuring 54 inches (1.4 metres) that was unveiled to an audible murmur of appreciation from the audience.

A set of wooden steps leading up to the raised "dohyo" sumo ring were installed for Abe and Trump to walk up, with both leaders donning shiny black slippers to enter the space, which is considered sacred.

Trump read in English from a scroll, offering Asanoyama the cup "in honour of your outstanding achievement", before lifting the massive trophy with the help of a sumo official and presenting it to the wrestler with an enormous grin.

The presidential sumo visit prompted high security, with long lines forming at metal detectors in the blazing heat before the tournament kicked off.

"I thought we would see some level of tight security. But I didn't realise that it was going to be this much," 76-year-old Hisato Koizumi from Tokyo told AFP as he waited.

"We got today's tickets by chance. I don't like this."

"It's a pain. There aren't so many bad people in Japan," she said.

Excitable fans were also warned against throwing their seat cushions -- as tradition dictates whenever a yokozuna or grand champion is felled -- lest the president be hit.

After the sumo, self-employed Masamitsu Kurokawa, 56, said Trump had an "aura" and was "in a different class".

Earlier, Trump and Abe kicked off the visit with a round of golf -- the fifth time the leaders have played together.

Trump arrived at the course outside Tokyo by helicopter, sporting a red sweater and black trousers with a red USA cap. He was greeted by a casually-dressed Abe, who later tweeted a selfie of the two leaders grinning into the camera.

Aerial footage on local television showed the pair practising and putting on the manicured greens despite the unseasonably warm weather. They were accompanied by Isao Aoki, one of Japan's most successful golfers.

The two leaders rounded out the day with a meal at a traditional Japanese grill restaurant, with wagyu beef and vanilla ice cream among the menu items.

Trump said he and Abe had discussed "trade and military and various other things".

"I think we had a very productive day."