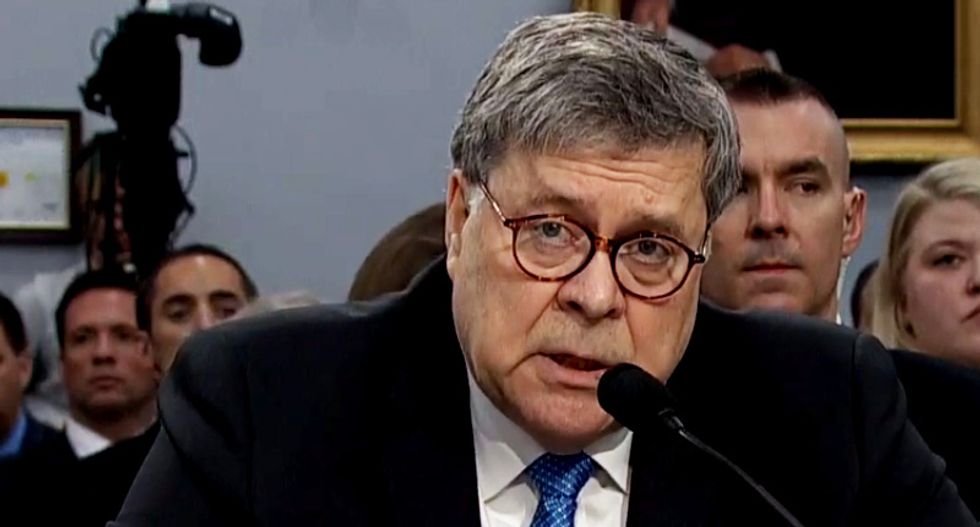 It is an article of faith among people who regularly tune in to Fox News' evening lineup that the single greatest scandal in American history is the framing of Donald Trump by "dirty cops" at the FBI and the Department of Justice in order to destroy his presidency. In this telling of current events, it all started as a cover-up of the nefarious crimes committed by Hillary Clinton. When she didn't win the election, they hatched the Russia investigation in order to remove Trump by other means. He is an innocent man who was wrongly accused at the hands of the Clinton-loving "deep state" cabal, and he's heroically battling back their assault even as he works his impressively large fingers to the bone making America great again.

As Sen. Lindsey Graham of South Carolina opened the Senate Judiciary Committee's hearing about the Mueller report on Wednesday morning, he channeled that alternate reality with a rambling statement about Hillary Clinton, saying that he planned to get to the bottom of this email situation once and for all. There's no need to go into the details (if you want them, Philip Bump of the Washington Post helpfully laid them all out) but here's a taste of Graham's rhetoric:

Other Republicans on the panel also spoke at length about the email scandal, encouraging Attorney General Bill Barr to follow up with an investigation into Clinton's alleged crimes as well as all the Obama-era officials they say set up the president. As Graham's home state newspaper put it:

U.S. Sen. Lindsey Graham, R-S.C., on Monday laid out his next steps for dealing with the aftermath of Robert Mueller’s investigation into President Donald Trump’s 2016 campaign.

First up: Launch an investigation into whether Hillary Clinton, Trump’s former Democratic challenger, got help from President Barack Obama’s Department of Justice. ... Graham predicted his GOP colleagues would be “enthusiastic” about the direction in which he planned to take his committee.

I've believed that the Republicans would have to take this up officially for some time. The Fox News base of the party demands that Clinton and her "deep state" cult be stopped. Also, Graham is running for re-election in 2020.

But until now, I hadn't thought the Department of Justice would get involved in this ridiculous con job. Sure, they've fired some top people, but it sounds as though they may now be considering a more thorough purge. And it looks like the attorney general is all too happy to help.

In his testimony on Wednesday, Barr made quite a spectacle of himself. He lied about many things, of course. He denigrated special counsel Robert Mueller, clearly miffed that he had failed to clear the president of all wrongdoing, as Barr seems to believe he was required to do. You see, Barr has a strange theory that if you follow the DOJ Office of Legal Counsel policy that a president can't be indicted then the next step is to conclude that a president can't be investigated either. He said, "I think that if [Mueller] felt that he shouldn’t go down the path of making a traditional prosecutive decision, then he shouldn’t have investigated. That was the time to pull up.” In other words, any investigation must clear the president or not be undertaken at all.

We now know that Mueller was unhappy with Barr's famous four-page letter supposedly summarizing the report's "conclusions" and complained that his findings were being misinterpreted as a result. CNN reported yesterday that White House special counsel Emmet Flood complained to Barr about Mueller's report the day after it was released, saying it was "political" and legally deficient. It would appear that the cold war between Robert Mueller and the White House has now turned hot.

This is not all that surprising considering the stakes. Mueller must have known that writing his report the way he wrote it would anger the president and his allies. The interregnum between Barr's letter and the release of the actual report may have helped convince the Fox News crowd that Mueller's conclusion was indeed "No Collusion, No Obstruction, Total Exoneration," but Mueller knew that's not what it said and that people would eventually figure it out. I doubt he anticipated, however, that his longtime friend Bill Barr would so eagerly take up arms against him. For the White House to call Mueller "political" in light of Barr's behavior takes chutzpah.

In what was perhaps the most dramatic moment of Barr's appearance before the Senate committee, Sen. Kamala Harris, D-Calif., asked Barr whether anyone in the White House had asked him to open an investigation of anyone. Clearly taken aback, Barr stuttered and stammered, asking her to repeat the question, obviously desperate to buy time to figure out an answer.

They don't have to ask. Trump has said publicly that he wants the "evil people" who investigated him to be investigated. He's tweeted dozens of times that "Crooked Hillary" should be in jail. Fox News reported this just last week:

As the New York Times has reported, this is actually a right-wing hit job orchestrated by Rudy Giuliani and aimed at Joe Biden, whose son Hunter has been working with Ukrainians.  This sort of thing is par for the course with Republicans, of course. (Recall the bogus Uranium One and Clinton Foundation stories, orchestrated by Steve Bannon, with which major newspapers smeared Clinton during the 2016 campaign.) But this time it may be different.

Lindsey Graham will undoubtedly take his investigation wherever Trump needs it to go. He will almost certainly "follow up" on this Ukrainian angle. What's more concerning is the fact that Barr appears ready to put the Justice Department to work to help the Trump campaign, which is exactly what the right-wing fever swamp accuses the FBI of doing for Clinton.

But then, self-awareness isn't exactly Barr's strong suit. In what was perhaps his most fatuous comment of his testimony on Wednesday, he proclaimed, “We have to stop using the criminal justice process as a political weapon" — this as he defended the man whose ecstatic followers' favorite refrain is "Lock her up!"