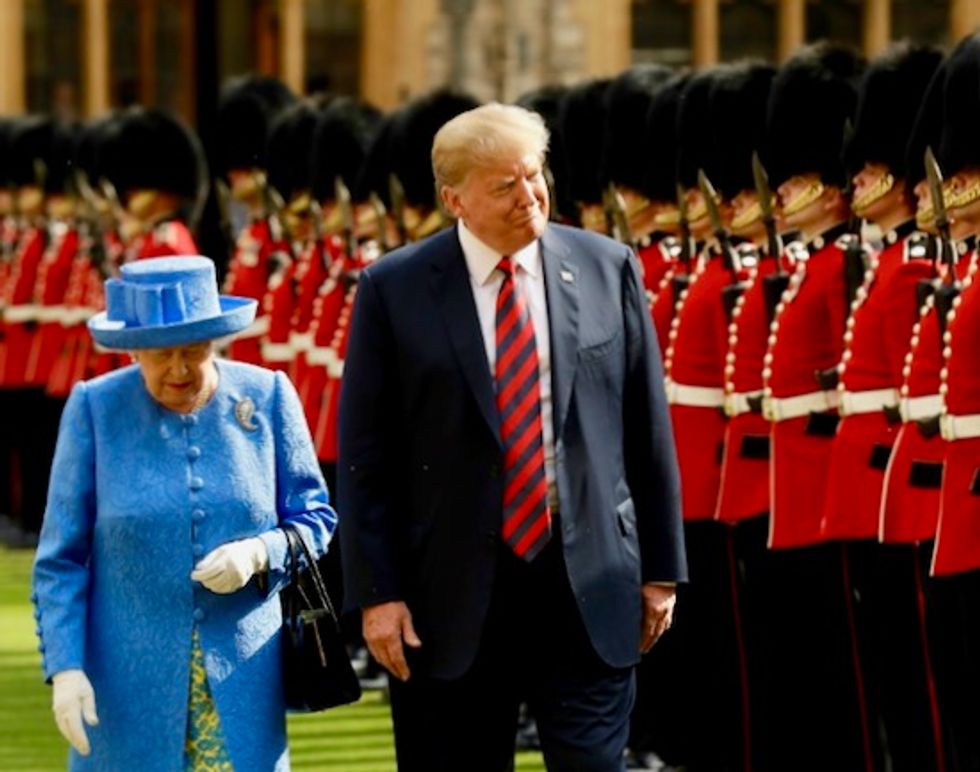 Just a few days after returning from his visit to Japan, where he met new Emperor Naruhito, Donald Trump heads to Britain, where Queen Elizabeth II will receive him during a state visit that could be rocky.

The US president -- who has never hidden his affinity for military honor guards and red-carpet diplomacy -- will arrive in London at a moment when the country's politics are in disarray.

Prime Minister Theresa May will soon step down, her party is looking for a successor and Britons are wondering how their "Brexit" from the European Union is going to happen -- and what it will mean for them.

His last visit to Britain nearly a year ago, which brought tens of thousands of protesters into the streets, was particularly tumultuous after Trump's criticism of May to The Sun tabloid caused an uproar.

Trump's three-day stay this time around begins on Monday with a ceremony at Buckingham Palace followed by lunch with the queen.

AFP/File / Brendan SMIALOWSKI US President Donald Trump heads to Britain just a few days after returning from his visit to Japan, where he met new Emperor Naruhito

That evening, he will be the guest of honor at a state dinner, a privilege also afforded to George W. Bush and Barack Obama.

So what kind of attitude will the billionaire Republican adopt on the trip? Will he weigh in further on who should next occupy 10 Downing Street? Will he offer Britons advice on how to leave the EU?

As have all his predecessors, he will certainly emphasize the "special relationship" between the United States and Britain. But the rest -- as with most things related to POTUS 45 -- is hard to predict.

"I think President Trump is perhaps looking most forward to his interactions with the royal family," said Heather Conley, director of the Europe program at the Center for Strategic and International Studies.

In the summer of 2018, Trump had tea with Elizabeth II at Windsor Castle, but was not afforded the pomp and circumstance of a state visit.

POOL/AFP/File / WILL OLIVER US President Donald Trump and British Prime Minister Theresa May, seen here in July 2018 at Blenheim Palace -- will meet one last time before she steps down

Before he sets foot on British soil, there are multiple calls for protests -- and controversy is already brewing.

The leader of Britain's main opposition Labour party, Jeremy Corbyn, declined an invitation to the state dinner in Trump's honor.

He said it wasn't the time to roll out the red carpet for a president who "rips up vital international treaties, backs climate change denial and uses racist and misogynist rhetoric."

On Tuesday, Trump's trip will take a decidedly political turn when he sits down with May, just days before she steps down on June 7.

While she was the first foreign leader welcomed to the White House after Trump's election victory in November 2016, their relationship has not always been rosy.

Tensions have soared on occasion and the disputes between the two sides are real.

"When you look at the US-UK relationship, there's a lot of bilateral disagreement," Conley said, naming Iran as a major point of contention, seeing as Britain backs the nuclear deal dumped by Trump.

AFP / Tolga AKMEN Before heading across the Atlantic, President Trump staked a claim to close ties with Boris Johnson, the pro-Brexit favorite in the race to succeed May

The Paris climate accord, which Trump also abandoned, is also on the list. The US president's talks with Prince Charles, who is actively pro-environment, could focus on this issue.

China and its controversial tech giant Huawei could also be on the agenda, as well as a US-British trade deal, though no concrete progress is expected from this trip.

Before heading across the Atlantic, Trump staked a claim to close ties with Boris Johnson, the pro-Brexit favorite in the race to succeed May, and anti-EU populist Nigel Farage.

"Maybe it is not my business to support people but I have a lot of respect for both of those men."

He doubled down on Friday, praising Johnson's bid for the prime minister's post in an interview with The Sun.

"I think Boris would do a very good job. I think he would be excellent," he said.

No meetings are scheduled with Johnson or Farage -- for now.

The end of Trump's European trip will focus on the 75th anniversary of D-Day, with a ceremony at Portsmouth also attended by the queen.

Trump and his wife Melania will then make a brief stop in Ireland before heading to France on June 6 for the D-Day commemorations in Normandy.