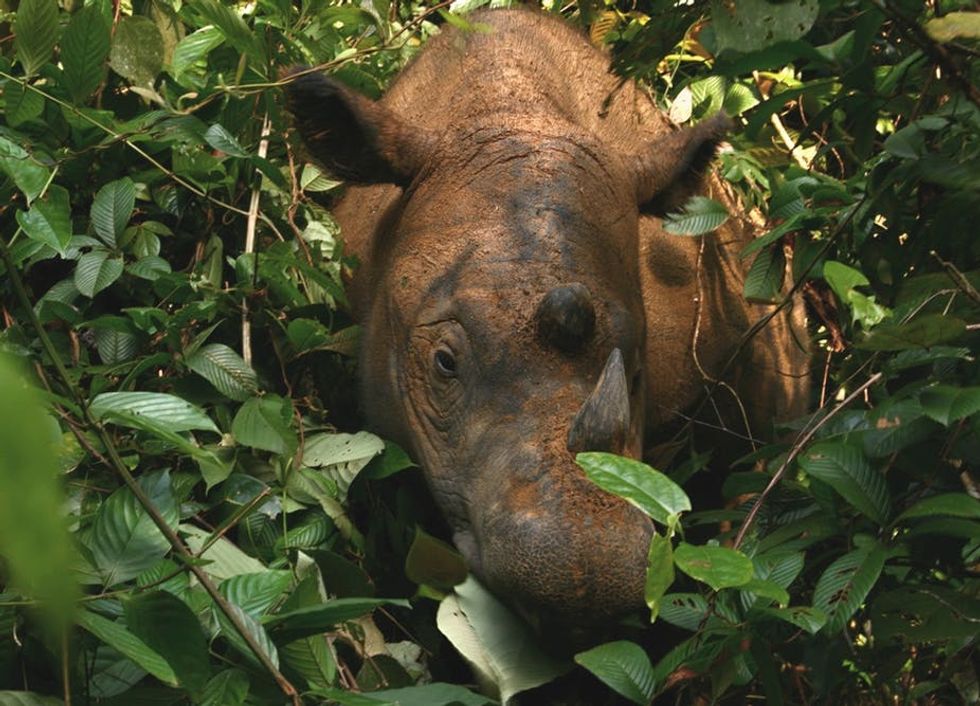 Rhino die every day, so why is the world mourning the loss of Tam? Tam was the last male Sumatran rhinoceros in Malaysia and was thought to have died of old age in his thirties – elderly for a Sumatran rhino. He was taken from the wild in 2008 to a sanctuary in Malaysian Borneo. His health had been deteriorating since April 2019 and he finally succumbed in May. He is survived by a single female, Iman, who cannot reproduce due to a ruptured tumour in her uterus.

The news isn’t good, but an estimated 80 individuals survive in the wilds of Indonesia – not a great number, but marginally better than the Javan rhino which may be as few as 58. By comparison, the African white rhino, which draws a great deal of concern, is thought to number 20,000. But populations of the Sumatran rhino – the world’s smallest and hairiest rhino – have declined 70% in the past two decades, mainly due to poaching and habitat loss, and are now classed as critically endangered – the highest possible risk of extinction.

The majority of the remaining Sumatran rhino are reckoned to be on Sumatra – the largest island of Indonesia – with a handful likely in the wild in Indonesian Borneo. For such a rare species with a scattered distribution that lives in dense mountain forests, evaluating the population size isn’t easy. Camera trapping is the main tool for counting this relatively diminutive and shy rhino, but even confidence in the estimate of 80 individuals isn’t high. There may be more but there are likely to be less – possibly as few as 30. 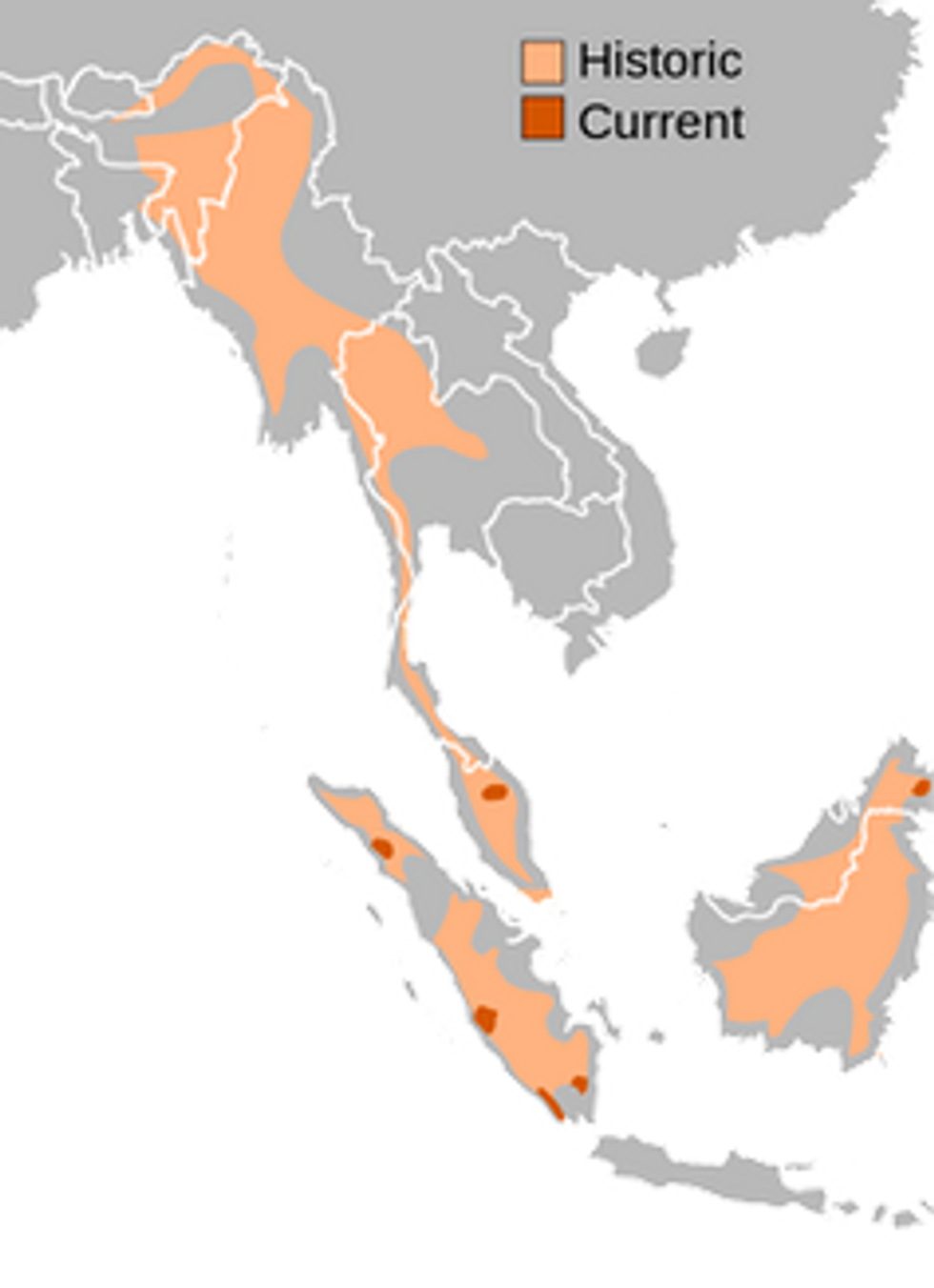 Sumatran rhino once roamed across Asia, from south-east India, Bangladesh, Myanmar and Thailand to the islands of Sumatra and Borneo. It’s believed the wild Malaysian populations are now extinct. There may be a small population in Kalimantan, Indonesian Borneo.

On Sumatra, populations are thought to be isolated as their habitats have fragmented into smaller pockets due to deforestation. The result is inbreeding and means that genetically these sub-populations have a bleak future. They have been extinct in the wild in Malaysia since 2015. Captive Tam and Iman were already a lost cause at that point. With no possibility of reproduction, the Malaysian population of Sumatran rhino have been functionally extinct for many years.

Low population sizes, few rhinos living close together and the isolation of viable habitats have combined with fatal consequences for the Sumatran rhino. If females don’t regularly mate, they have a tendency to develop uterine cysts and growths. It was this that left Iman infertile. This is what conservation biologists refer to as an “Allee effect”: the lower a population becomes, the less successful individuals become at reproducing. Ultimately, this leads to an extinction vortex.

Tam’s death may yet encourage an ambitious plan to save the Sumatran rhino – with a concerted effort to capture as many of the remaining wild rhino as possible, and breed them in captivity.

A young female called Pahu – whose forest habitat was literally being removed from under her feet by mining companies – was captured in 2018 and is apparently doing well in captivity. Sadly, there is a risk to this strategy. By removing rhino from their habitat, we further reduce the probability of them breeding successfully in the wild. 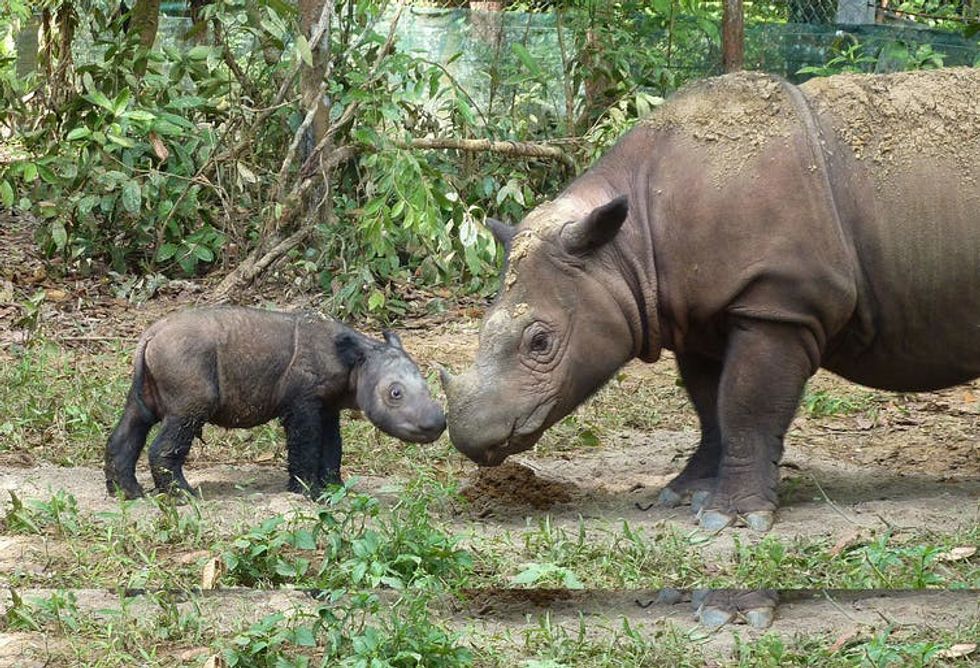 As an ecologist, captive breeding is something that I find hard to celebrate. But it may be the only hope to save a species that, otherwise, appears doomed to slowly dwindle into extinction.

That said, the breeding success of Sumatran rhino in captivity still isn’t assured. There has been some success in US zoos, but from 45 rhino captured since 1984, only four calves have been born. Even geopolitics deals this species a bad hand. Malaysia holds Iman and her eggs – the single surviving captive Sumatran rhino on the island of Borneo – and the sperm of recently deceased Tam. But the country must now collaborate with Indonesia, which holds seven rhino in captivity which have so far produced two offspring.

Back from the dead?

The last throw of the dice may have to involve something akin to resurrection – using stored eggs and sperm from rhino, including Iman and Tam, for artifical insemination or IVF in captive surrogates of the same species. Sumatran rhinos are truly unique – they are the only member of their genus. With no related rhino species, the only surrogate candidate must be another Sumatran rhino. If successful, offspring could potentially come from otherwise lost genes, as has been suggested for the African white rhino.

While the science is developing, “de-extinction” is still an expensive and unlikely long shot that raises its own practical and ethical dilemmas. If successful, we could end up farming an ecologically dead species. I want wild animals to be in the wild contributing to the ecosystems within which they evolved – not living in zoos forever.

Both modes of rescue – captive breeding and genetic resurrection – are too little, too late, like firefighters taking action when the damage is already too far gone. The longer that society waits to help a declining species, the greater the delay in addressing the driving forces of endangerment, be they poaching, habitat loss, non-native species, or climate change. And the lower the probability of success, and the greater the cost of the attempt.

So, Tam was just one rhino. He was not the last of his species, or even the last male of his species, but he is one more loss from an already limited population. The lower the population size, the greater the impact of losing another individual. Tam is another alarm bell alerting us to our inability to act quickly enough to remove the threats to species, and ultimately to save life on Earth. Every dead Sumatran rhino is now met with publicity and concern. Rightly so, but we need to start getting the conservation action right early enough for it to work.