The civil rights activist so close to Martin Luther King Jr. she was thought of as his ‘other wife’ 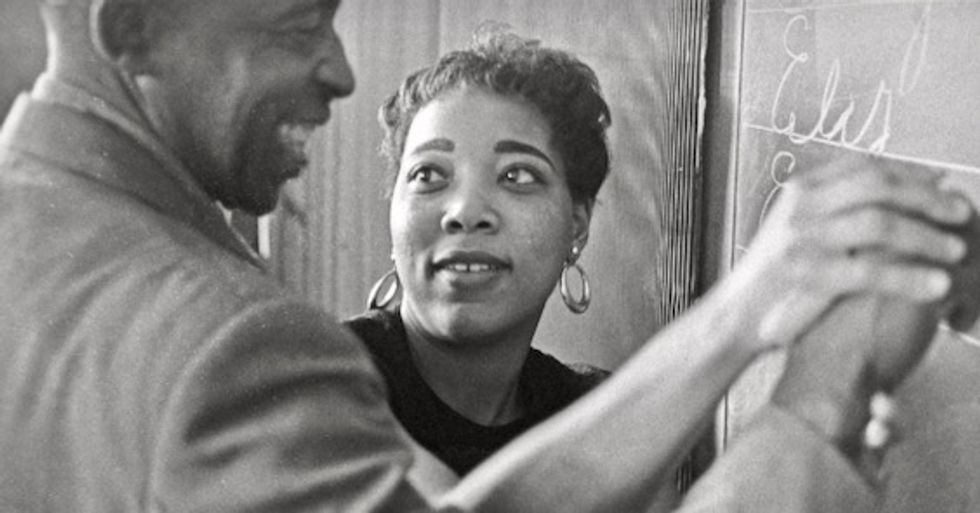 In a recent article published in Standpoint Magazine, Pulitzer Prize-winning Martin Luther King Jr. biographer David Garrow details new information about King he discovered in FBI documents. The most damaging is that King may have witnessed – and encouraged – a sexual assault at a Washington, D.C. hotel in January 1964.

Some historians have cautioned against taking too much stock of Garrow’s findings; the FBI, after all, has a well-known track record of trying to undermine the beloved civil rights leader.

But in the ensuing controversy, one aspect of Garrow’s explosive, 7,800-word article has gone largely overlooked.

Garrow publishes content from FBI files noting that a woman named Dorothy Cotton was King’s “constant paramour.” He also details FBI wiretaps from 1964 noting that King’s wife, Coretta, “berated” him “for not spending enough time alone with her.” At the time of the phone call, according to the FBI files, King was with Dorothy at a hideaway apartment in Atlanta. Garrow, at one point in his piece, calls Cotton “the most important woman in King’s life.”

Who was Dorothy Cotton?

She had a significant role in the civil rights movement: She was the only woman to eventually take the title of director within King’s Southern Christian Leadership Conference. She often traveled with King. And she was with him in Memphis during his last days alive.

She died in June 2018. But in July 2017, I spent two days interviewing Cotton. As part of my research on the relationship between King and poet Langston Hughes, I was searching for the last letter Hughes sent from his deathbed, which he wrote to King. I hoped Cotton might know of its whereabouts.

Cotton didn’t know anything about the letter. However, over the course of the interview, she spoke, unprompted, about her close relationship with King. For over 50 years, she had suppressed her excruciating memories of their final hours in Memphis, leading up to his assassination.

Now, with the publication of these FBI records, I believe it’s time to acknowledge the full extent of their relationship.

The making of a civil rights leader

Dorothy Foreman Cotton was born in Goldsboro, North Carolina in 1930. While enrolled at Shaw University, a historically black college in Raleigh, she worked as a housekeeper for psychology professor Robert Prentiss Daniel. When, in 1952, Daniel was named president of Virginia State University in Petersburg, Virginia, he asked her to accompany him. She agreed.

In Petersburg, she eventually joined pastor Wyatt Tee Walker’s church, Gillfield Baptist, and participated in their successful effort to desegregate a local library.

Cotton first met King on June 1, 1960, when he came to speak before Walker’s congregation. The two were introduced afterwards during a dinner at Walker’s house.

In my interview, which she allowed me to record, she told me how they instantly hit it off – laughing, singing and enjoying each other’s company.

When Walker was invited in the fall of 1960 to join King permanently in Atlanta as King’s executive director, Dorothy joined him.

In Atlanta, her role in the burgeoning civil rights movement grew. By 1963, she was named director of the Southern Christian Leadership Conference’s Citizen Education Program. She organized protests in St. Augustine, Florida to challenge segregated beaches and in Selma, Alabama, to advocate for voting rights. In her autobiography, “If Your Back’s Not Bent,” she estimated she trained upwards of 8,000 grassroots activists using a workshop model developed by civil rights activist Septima Clark.

It was during these protests, workshops and long road trips that she became closer to King. She told me how she sometimes helped him craft his speeches, and would jot down lines of verse or parts of a sermon that she thought might inspire him.

Dorothy Cotton recalls collaborating with King on his speeches.

Garrow told me he first learned about Cotton’s relationship with King in 1979. Since then, many subsequent scholars have even come to think of Cotton as King’s “other wife” – but each has deferred to Cotton’s wishes to stay silent about it while she was alive.

Cotton was an intensely private woman, and she may have worried that her relationship with King might overshadow her remarkable civil rights work.

As she noted in our interview, she didn’t ever want to be “reduc[ed] to some glamour girl.”

But she went on to describe the intimacy of their relationship. They shared a deep love of poetry. When he’d spend the night at her place, she recalled how he would occasionally wake up in the middle of the night to recite verses.

Her Atlanta apartment became a refuge from the demands and pressure of his growing fame. Sometimes he would slink off to her place and, as Cotton put it, “giggle like a schoolboy.”

Dorothy Cotton remembers how her apartment was like a refuge for King.

According to Cotton, King once revealed that he wished they could live somewhere where polygamy was legal. But while King stayed married to Coretta Scott, the amount of time Cotton spent with King undid her own marriage.

She was always by King’s side, she explained, “and that’s why I’m not married anymore.”

The last night at the Lorraine

In 1989, civil rights activist Ralph Abernathy published his autobiography, “And the Walls Came Tumbling Down.” In it, without naming names, he noted that King spent his final night alive in Memphis alone with different women at various points.

At the time, many dismissed Abernathy’s account, arguing that he had perhaps written to spite King, whom he sometimes felt had received the lion’s share of the credit for the civil rights work the two friends had done in concert.

However in the years since, Abernathy’s portrayal has gradually been verified on several fronts.

And in my interview with Cotton, she went into even more detail about those heartbreaking final hours.

On April 3, 1963, Dorothy had flown with King and others to Memphis to support the city’s sanitation workers’ strike. She checked into the Lorraine Motel and was assigned room 307, right next to King’s room 306. That evening, King delivered his “Mountaintop” speech at Mason Temple before a feisty crowd of striking workers.

“I want you to know tonight,” King boomed, “that we as a people will get to the Promised Land! So I’m happy tonight – I’m not worried about anything, I’m not fearing any man! Mine eyes have seen the glory of the coming of the Lord!”

Dorothy didn’t attend the speech; she had stayed behind at the Lorraine Motel. Anticipating that King would be hungry upon his return, she went out to get some fried chicken. Then she waited for him in her room. And waited. He never showed up. At around 3 a.m. she peeked into his room next door. He wasn’t there. With her plate of food, she wandered the grounds of the motel in the rain looking for him.

She didn’t know that King had been at the home of civil rights activist Tarlease Matthews across town from around 11 p.m. to 2:30 a.m. And she hadn’t realized that, when King returned to the Lorraine, he eventually ended up in Kentucky State Senator Georgia Davis Powers’ room on the floor below, where, as Powers would later write, the two became intimate.

The next morning, at around 7 a.m., King showed up at Cotton’s room. As Abernathy detailed in “And the Walls Came Tumbling Down,” Cotton and King began fighting. She was annoyed that she had waited up all night for him. King pleaded with her to stay. Instead, she took her already packed bags and left on a 1 p.m. flight to Atlanta with Southern Christian Leadership Conference staffer Jim Harrison – who was, at the time, an FBI informant – and Southern Christian Leadership Conference press secretary Tom Offenburger.

Exhausted upon arriving in Atlanta, she quickly fell asleep. She was awoken by next-door neighbor Rita Samuels, who told her that King had been shot dead.

It took her over two years to get over his death.