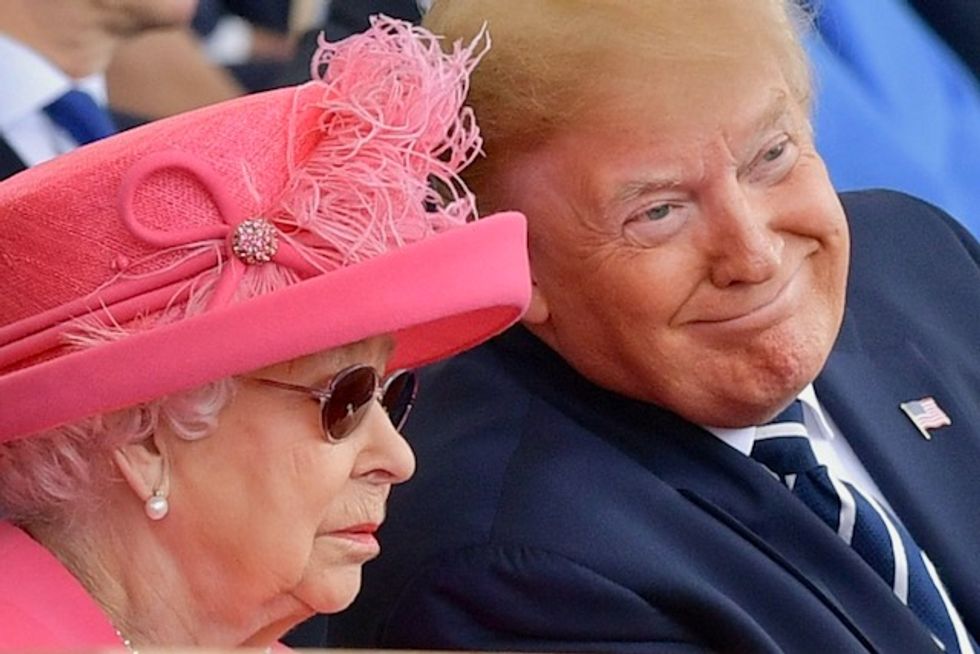 US President Donald Trump and Queen Elizabeth II gathered with 300 veterans on the south coast of England on Wednesday to commemorate the 75th anniversary of D-Day -- one of the heroic turning points of World War II.

More than a dozen other world leaders joined them in Portsmouth for Britain's national event honouring the Allied cross-Channel invasion of the Normandy beaches.

It remains the largest amphibious assault in history, and left 4,400 troops dead on the first day.

With some in the audience shedding tears and a few of the surviving veterans, now all in their 90s, sitting upright in the front rows, Trump read excerpts from the prayer President Franklin Roosevelt delivered by radio on D-Day.

"They will need Thy blessings for the enemy is strong. He may hurl back our forces but we shall return again and again," Trump read, in what will be one of his last acts on a three-day state visit to Britain.

AFP/File / JEAN-FRANCOIS MONIER The Battle of Normandy, the largest amphibious assault in history, was a key moment that helped lead to the end of World War II

Portsmouth was the main staging point for 156,000 US, British, Canadian and other Allied troops who sailed for northern France.

The Battle of Normandy on June 6, 1944 led to the liberation of Europe and helped bring about the end of World War II the following year.

The hour-long ceremony included theatrical productions and news reel footage watched by presidents and prime ministers from across Europe, Australia and New Zealand.

"When I attended the commemoration of the 60th anniversary of the D-Day landings, some thought it might be the last such event," Britain's 93-year-old queen said.

The gathered drew silent when a recording of the stirring battle cry Prime Minister Winston Churchill delivered in the UK parliament as Nazi forces advanced across Europe in June 1940 piped in.

- Fear of being afraid -

May read a letter written by Captain Norman Skinner to his wife Gladys on June 3, 1944, which was found the day before his death in Normandy on June 7.

"I am sure that anyone with imagination must dislike the though of what's coming," his letter said.

"But my fears will be more of being afraid than of what can happen to me."

Macron read the last letter of French resistance fighter Henri Fertet, who was executed when he was just 16.

"The soldiers are coming to get me. I must hurry," it said. "I am not afraid of death, my conscience is completely clear."

The D-Day commemorations are among May's last official duties before she steps down as leader of the governing Conservatives on Friday.

That will trigger a leadership contest. The winner, chosen from 11 candidates, will become the next prime minister by the end of July.

May's meetings with Trump have gone smoothly. The US leader tweeted on Wednesday that he "could not have been treated more warmly in the United Kingdom by the Royal Family or the people".

He reaffirmed his commitment to a "very big Trade Deal" with Britain after Brexit.

But he also sowed some characteristic confusion, walking back a series of comment he made at a joint press event with May on Tuesday.

Trump announced then that he had turned down Labour opposition leader Jeremy Corbyn's request for a one-on-one meeting, calling the socialist politician "a somewhat negative force".

But the US leader told ITV television in an interview aired Wednesday: "I didn't think it was appropriate to meet him, but I would. I certainly would have no problem with it."

He also told ITV he did not mean to say that US pharmaceutical companies' access to Britain's state-run health care system would need to be up for negotiation in the free trade talks.

"I don't see it being on the table," Trump told ITV.