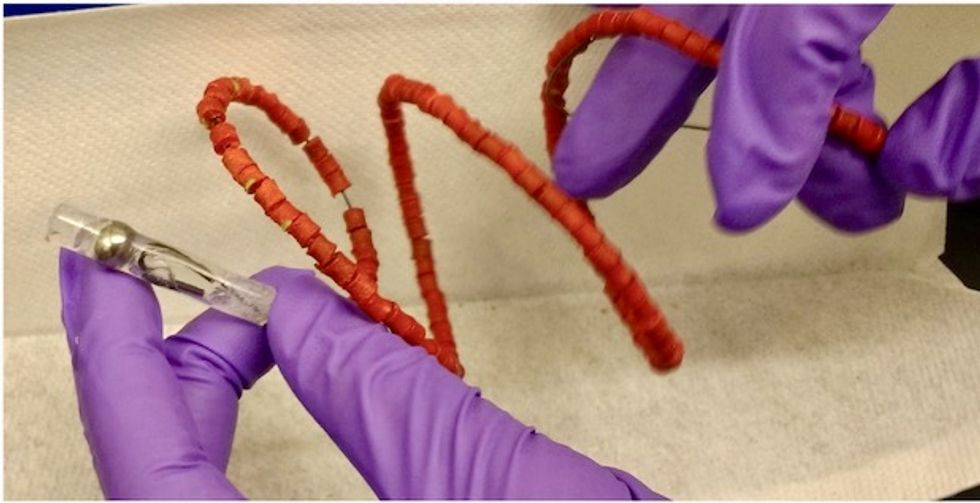 A prototype of the pills-on-a-coil prototype that delivers medicine while it sits in the gut. Malvika Verma and Karan Vishwanath, CC BY-SA

One of the universal truths of health care is drugs don’t work if people don’t take them. But there are new devices in development that may help patients take their medications as required for up to several months.

In developed countries, the World Health Organization estimates that as many as 50% of patients have a hard time following their medication regimen for chronic illnesses. In developing countries, that percentage is even higher. This global problem of patients not following their prescribed treatment regimens – which physicians refer to as nonadherence - is a major barrier to curing disease and results in US$300 billion of avoidable hospitalizations every year in the United States alone.

There are many reasons patients don’t adhere to their treatment. It’s a complex interplay of several factors. Patients may have had a busy day and forgotten to swallow a pill. Or, the price of the drug is too high for them to pay for treatment. Sometimes the side effects from some drugs are so severe that patients skip a few doses. In places where resource are tight, pharmacies may not have an adequate stock of drugs or frequent contact with patients to prescribe treatment.

Regardless of the reason, the consequences of nonadherence are significant and include prolonged sickness, drug resistance and even death. As a biomedical engineer at MIT, I am developing technologies that make it easier for patients to complete their treatment for infectious diseases by reducing the frequency of dosing.

A pill releases HIV and malaria drugs for weeks 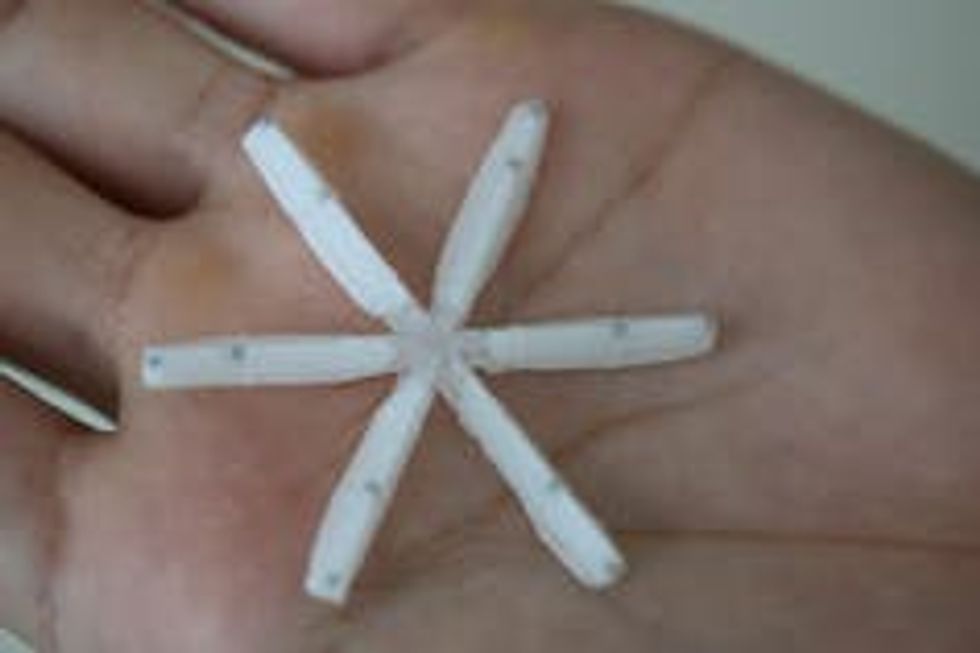 This strategy is inspired by the observation that a patient is more likely to swallow a pill once a day instead of four times a day. I recognize that adherence is a complicated problem, and it is difficult to change the behavior of a patient or the workings of the health care system. However, I can contribute my engineering skills to tackling the challenge by inventing new drug delivery systems that slowly release medication over weeks or even months.

Capsules have long been used to deliver medicines. They are made of materials that release drug within a day and are absorbed or pass through the intestines. Several of my colleagues have worked on a capsule that can be swallowed and then unfolds into a star shape with six arms once it reaches the stomach. Because of its size, shape, chemical and mechanical properties, the star can stay in the stomach for weeks.

Each arm of the star can hold a different drug and slowly release it.

After the drugs have all been released, the star can be triggered to break apart and pass through the intestine safely. The system has been tested with HIV and malaria drugs in pigs. Recently, Lyndra Therapeutics demonstrated that the star system was able to release an Alzheimer’s drug for a week in healthy humans.

The star system is easy to administer, but it is limited by the mass of drug it can dispense. Because it is swallowed, it can hold at most just 1 gram of drug. A daily dose of antibiotics for tuberculosis requires more than 3 grams of the drug. 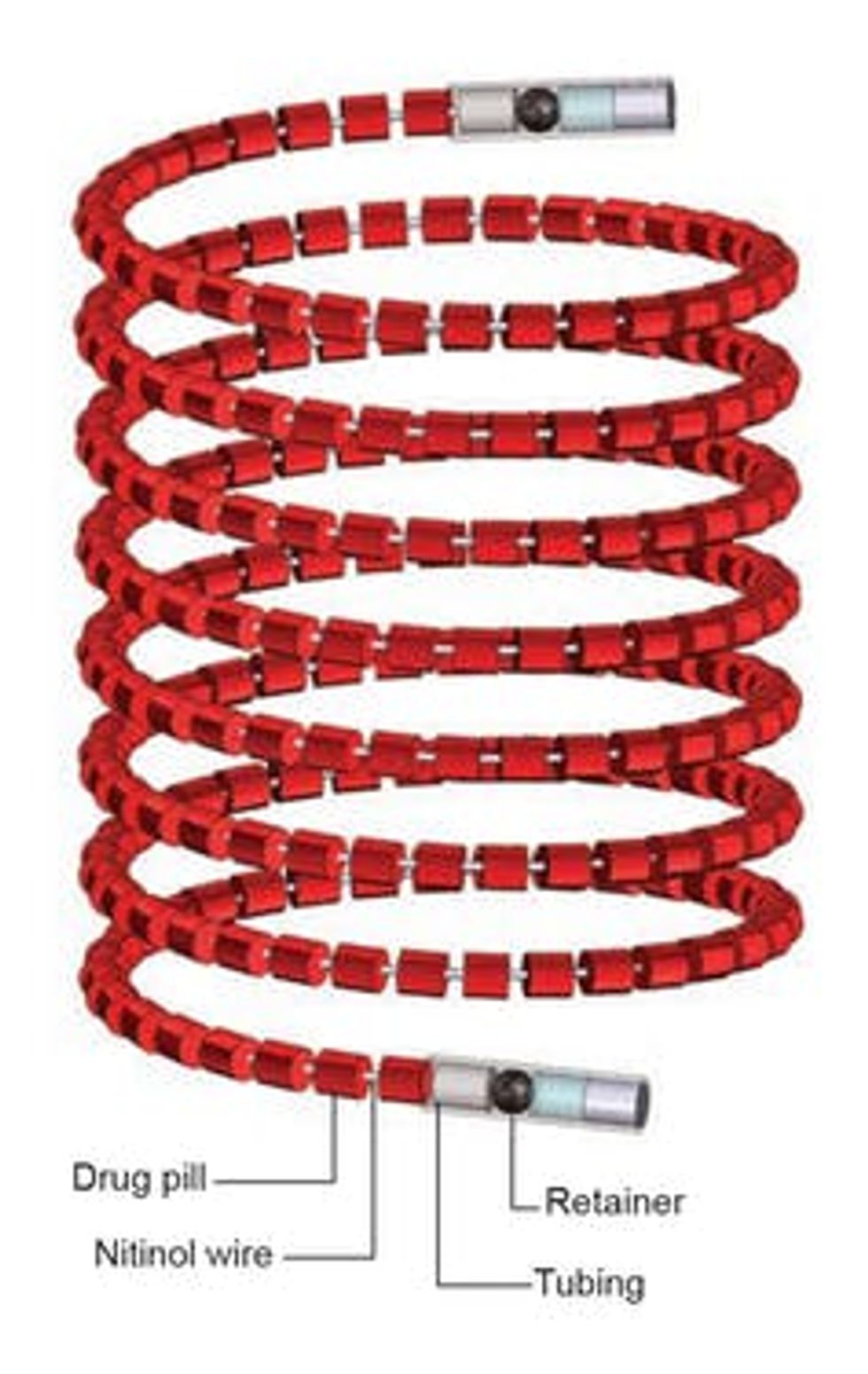 Inspired by the capacity of the stomach to hold large objects such as bariatric balloons, our group at MIT has recently designed a pills-on-a-coil system that can hold and release at least 10 grams of drug for one month. We have tested this in pigs. This system is able to dispense the quantity of antibiotics necessary to treat TB, the world’s leading killer among infectious diseases, for one month. Nonadherence to TB treatment, which requires at least six months of multiple daily pills, is a major reason the treatment fails.

Our pills-on-a-coil system consists of a coiled wire upon which medication is strung, like a candy necklace. The ends of the wire are protected in piece of tube with a magnet. The wire is superelastic and can be stretched to pass through the esophagus and then form a tight coil when it reaches the stomach. Cylindrical drug pills are made from mixing the drug with silicone followed by coating a thin layer of something called Eudragit RS 100. Silicone and Eudragit RS 100 are common materials used in long-term drug delivery to provide slow drug release. All pills simultaneously release a predictable amount of drug into the stomach. Once all drugs from the pills have been released, a separate retrieval device with a magnet can sense, attach and remove the coil from the stomach.

X-ray images of a pig’s stomach showing the device on day 0 and day 28.

One critical question for any new medical device is whether patients will accept it. To address this, I spent six months working with seven government TB treatment centers in New Delhi, India. Currently, India has the highest burden of TB patients in the world. Our team at MIT collaborated with the Government of India TB program, Tata Trusts and Operation ASHA to conduct a survey of 300 TB patients and 111 health care providers to gauge whether they would be willing to try a treatment with the pills-on-a-coil system. Close to 45% of patients indicated this is something they would consider.

Our survey results supported the use of a new long-term drug delivery system that can release TB medication over the course of one month. Through interacting with numerous TB doctors and nurses, I was able to understand more about the feasibility of my system in current clinical care and the additional infrastructure necessary to administer. I anticipate multiple applications of the pills-on-a-coil system for treating a variety of diseases – from TB to hepatitis C – by making it easier for patients to finish their regimens and get cured. Initial safety studies of the device will be conducted in the U.S. We hope that clinical trials will begin in five years.

A pill-on-a-coil for infectious diseases.