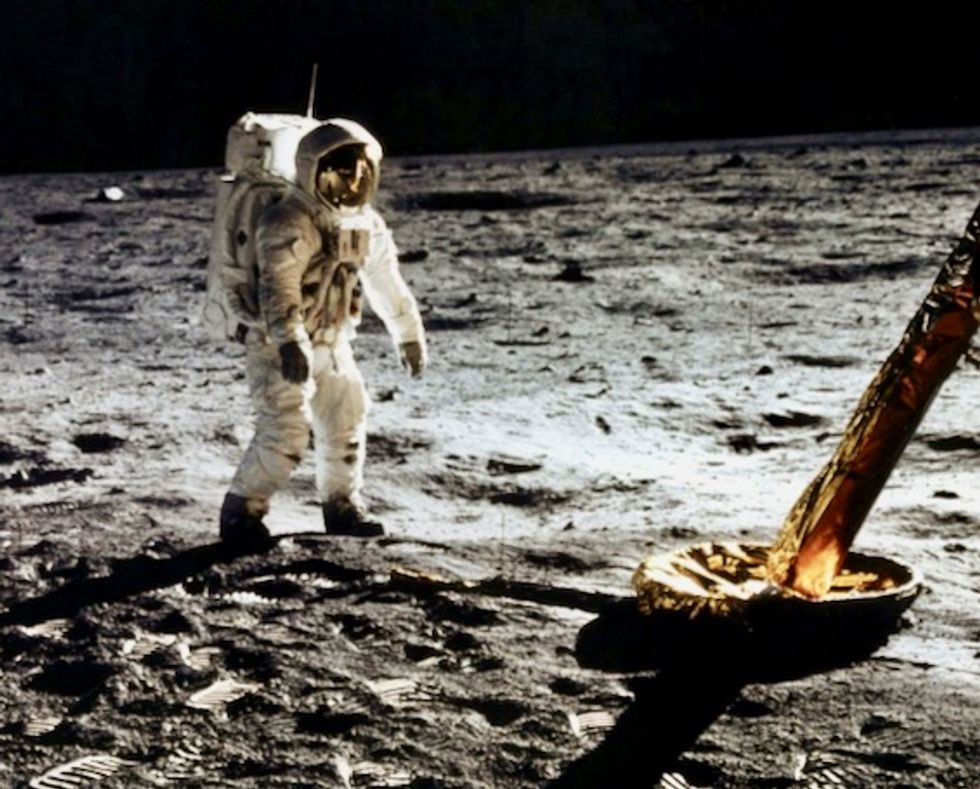 Astronaut Edwin E. Aldrin Jr, the lunar module pilot, walks on the surface of the moon near the leg of the Lunar Module "Eagle" during Apollo 11's first manned lunar landing on July 20, 1969 NASA/AFP/File / -

It’s been half a century since the magnificent Apollo 11 moon landing, yet many people still don’t believe it actually happened. Conspiracy theories about the event dating back to the 1970s are in fact more popular than ever. A common theory is that film director Stanley Kubrick helped NASA fake the historic footage of its six successful moon landings.

But would it really have been possible to do that with the technology available at the time? I’m not a space travel expert, an engineer or a scientist. I am a filmmaker and lecturer in film post-production, and – while I can’t say how we landed on the moon in 1969 – I can say with some certainty that the footage would have been impossible to fake.

Here are some of the most common beliefs and questions – and why they don’t hold up.

‘The moon landings were filmed in a TV studio.’

There are two different ways of capturing moving images. One is film, actual strips of photographic material onto which a series of images are exposed. Another is video, which is an electronic method of recording onto various mediums, such as moving magnetic tape. With video, you can also broadcast to a television receiver. A standard motion picture film records images at 24 frames per second, while broadcast television is typically either 25 or 30 frames, depending on where you are in the world.

If we go along with the idea that the moon landings were taped in a TV studio, then we would expect them to be 30 frames per second video, which was the television standard at the time. However, we know that video from the first moon landing was recorded at ten frames per second in SSTV (Slow Scan television) with a special camera.

To the moon and beyond is a new podcast series from The Conversation marking the 50th anniversary of the moon landings. Listen and subscribe here.

‘They used the Apollo special camera in a studio and then slowed down the footage to make it look like there was less gravity.’

Some people may contend that when you look at people moving in slow motion, they appear to be in a low gravity environment. Slowing down film requires more frames than usual, so you start with a camera capable of capturing more frames in a second than a normal one – this is called overcranking. When this is played back at the normal frame rate, this footage plays back for longer. If you can’t overcrank your camera, but you record at a normal frame rate, you can instead artificially slow down the footage, but you need a way to store the frames and generate new extra frames to slow it down.

At the time of the broadcast, magnetic disk recorders capable of storing slow motion footage could only capture 30 seconds in total, for a playback of 90 seconds of slow motion video. To capture 143 minutes in slow motion, you’d need to record and store 47 minutes of live action, which simply wasn’t possible.

‘They could have had an advanced storage recorder to create slow motion footage. Everyone knows NASA gets the tech before the public.’

Well, maybe they did have a super secret extra storage recorder – but one almost 3,000 times more advanced? Doubtful.

‘They shot it on film and slowed down the film instead. You can have as much film as you like to do this. Then they converted the film to be shown on TV.’

That’s a bit of logic at last! But shooting it on film would require thousands of feet of film. A typical reel of 35mm film – at 24 frames per minutes second – lasts 11 minutes and is 1,000 foot long. If we apply this to 12 frames per second film (as close to ten as we can get with standard film) running for 143 minutes (this is how long the Apollo 11 footage lasts), you would need six and a half reels.

These would then need to be put together. The splicing joins, transfer of negatives and printing – and potentially grains, specks of dust, hairs or scratches – would instantly give the game away. There are none of these artefacts present, which means it wasn’t shot on film. When you take into account that the subsequent Apollo landings were shot at 30 frames per second, then to fake those would be three times harder. So the Apollo 11 mission would have been the easy one.

‘But the flag is blowing in the wind, and there’s no wind on the moon. The wind is clearly from a cooling fan inside the studio. Or it was filmed in the desert.’

It isn’t. After the flag is let go, it settles gently and then doesn’t move at all in the remaining footage. Also, how much wind is there inside a TV studio?

There’s wind in the desert, I’ll accept that. But in July, the desert is also very hot and you can normally see heat waves present in footage recorded in hot places. There are no heat waves on the moon landing footage, so it wasn’t filmed in the desert. And the flag still isn’t moving anyway.

MORE ON THE MOON AND BEYOND

Join us as we delve into the last 50 years of space exploration and the 50 years to come. From Neil Armstrong’s historic first step onto the lunar surface to present-day plans to use the moon as a launchpad to Mars, hear from academic experts who’ve dedicated their lives to studying the wonders of space.

‘The lighting in the footage clearly comes from a spotlight. The shadows look weird.’

Yes, it’s a spotlight – a spotlight, 93m miles away. It’s called the sun. Look at the shadows in the footage. If the light source were a nearby spotlight, the shadows would originate from a central point. But because the source is so far away, the shadows are parallel in most places rather than diverging from a single point. That said, the sun isn’t the only source of illumination – light is reflected from the ground too. That can cause some shadows to not appear parallel. It also means we can see objects that are in the shadow.

‘Well, we all know Stanley Kubrick filmed it.’

Stanley Kubrick could have been asked to fake the moon landings. But as he was such a perfectionist, he would have insisted on shooting it on location. And it’s well documented he didn’t like to fly, so that about wraps that one up… Next?

‘It’s possible to recreate dinosaurs from mosquitoes the way they did in Jurassic Park, but the government is keeping it a secret.’