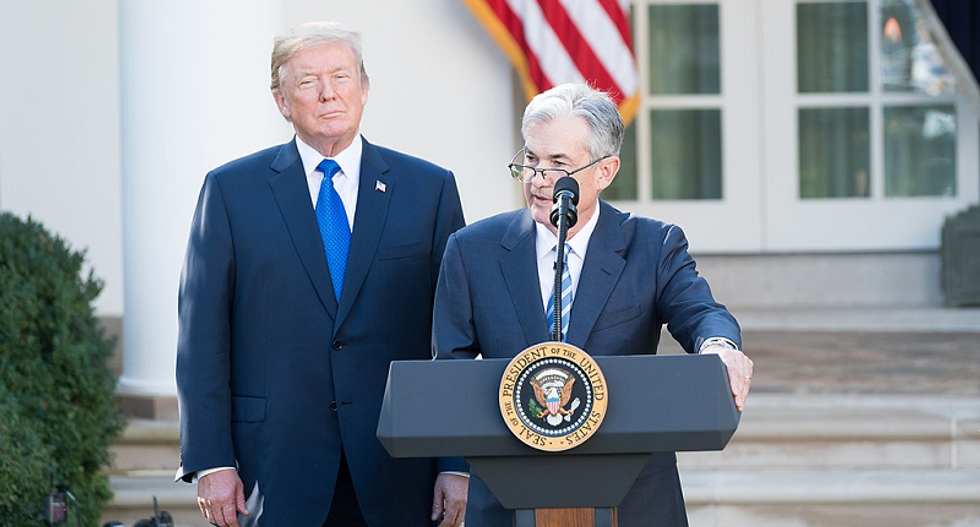 The Federal Reserve is set to "vaccinate" the US economy against a slowdown with the first interest rate cut in a decade, but the decision has been made more difficult by unrelenting political pressure.

President Donald Trump has constantly berated the Fed and its chairman, Jerome Powell, for failing to provide additional juice to the economy, which he has promised will grow by three percent and more each year.

"The E.U. and China will further lower interest rates and pump money into their systems, making it much easier for their manufacturers to sell product," Trump tweeted Monday.

"In the meantime, and with very low inflation, our Fed does nothing - and probably will do very little by comparison. Too bad!"

The central bank's challenge is to tune out politics ahead of Wednesday's announcement, and base the direction of monetary policy on the economic data.

Powell and other Fed officials have said repeatedly they expect the US economy to continue to grow and for inflation to eventually pick up, which makes the course correction now a bit unusual.

Unemployment, one of the two metrics the Fed is required by law to focus on, is at the lowest in nearly 50 years.

A strong jobs market would normally cause wages to rise, fueling inflation, the second key metric for the Fed.

However inflation has been largely absent, hovering below -- sometimes well below -- the two percent target.

And Trump's aggressive trade tactics have brought business investment to a screeching halt, at a time when major economies like China are slowing, and Brexit is weighing on Britain and the European Union.

That gives the Fed space to inoculate the US economy. And many economists say another cut is likely this year, and as many as three by early 2020.

- Why did the Fed hike in December? -

The Fed raised the key lending rate nine times from December 2015 to December 2018, including four times last year, as the US economy picked up steam.

Officials wanted to raise the policy rate to a more normal level, so it would have ammunition available to help stimulate a recovery with rate cuts.

The December hike was somewhat controversial given indications the trade wars were starting to impact the economy, and amid sharp declines in stock prices.

However, in the face of Trump's vocal attacks, the Fed may have wanted to show it could ignore the political pressure.

Now the Fed is caught in a dilemma of doing what Trump wants while convincing observers it is the right thing to do.

The problem with a central bank doing the bidding of politicians, is markets no longer believe monetary policymakers will act as needed -- even if unpopular -- when prices start to rise.

Once that inflation-fighting credibility is lost, it takes years to recover, as the United States saw in the late 1970s and early 1980s, and many countries have seen since.

That means the Fed would have to hike rates much more aggressively to clamp down on price increases, which would be likely to harm businesses and slow the economy.

- How do rate cuts boost the economy? -

The federal funds rate is the interest banks charge each other for very short term loans, and sets the base for all other types of lending such as mortgages and credit cards.

Lowering borrowing rates makes it easier for businesses to get loans to invest in new projects, and for consumers to buy homes, cars and other items, which creates demand that keeps the economy humming.

Powell's predecessor, Janet Yellen, said over the weekend that she favors a cut now given low inflation and a weakening global economy.

- What other tools does the Fed have? -

The Fed has limited weapons in its arsenal and has been struggling lately with a key one: communication.

In the wake of the global financial crisis, the Fed promised to keep rates low for a long time to solidify the recovery.

More recently Powell and other officials have stumbled with confusing and contradictory statements amid the changing economic environment.

And the shift in the Fed's message from rate hike to rate cut has seemed forced on them by financial markets.

Markets will be listening closely to Powell at the press conference Wednesday to see what signals he sends about future moves.