The forgotten history of segregated swimming pools and amusement parks

These nostalgic recollections, however, aren’t held by all Americans.

Municipal swimming pools and urban amusement parks flourished in the 20th century. But too often, their success was based on the exclusion of African Americans.

As a social historian who has written a book on segregated recreation, I have found that the history of recreational segregation is a largely forgotten one. But it has had a lasting significance on modern race relations.

Swimming pools and beaches were among the most segregated and fought over public spaces in the North and the South.

White stereotypes of blacks as diseased and sexually threatening served as the foundation for this segregation. City leaders justifying segregation also pointed to fears of fights breaking out if whites and blacks mingled. Racial separation for them equaled racial peace.

These fears were underscored when white teenagers attacked black swimmers after activists or city officials opened public pools to blacks. For example, whites threw nails at the bottom of pools in Cincinnati, poured bleach and acid in pools with black bathers in St. Augustine, Florida, and beat them up in Philadelphia. In my book, I describe how in the late 1940s there were major swimming pool riots in St. Louis, Baltimore, Washington, D.C. and Los Angeles.

Exclusion based on ‘safety’

Despite civil rights statutes in many states, the law did not come to African Americans’ aid. In Charlotte, North Carolina, for example, the chairman of the Charlotte Park and Recreation Commission in 1960 admitted that “all people have a right under law to use all public facilitates including swimming pools.” But he went on to point out that “of all public facilities, swimming pools put the tolerance of the white people to the test.”

His conclusion: “Public order is more important than rights of Negroes to use public facilities.” In practice, black swimmers were not admitted to pools if the managers felt “disorder will result.” Disorder and order defined accessibility, not the law.

Fears of disorder also justified segregation at amusement parks, which were built at the end of trolley or ferry lines beginning in 1890. This was particularly true at park swimming pools, dance halls and roller-skating rinks, which were common facilities within parks. 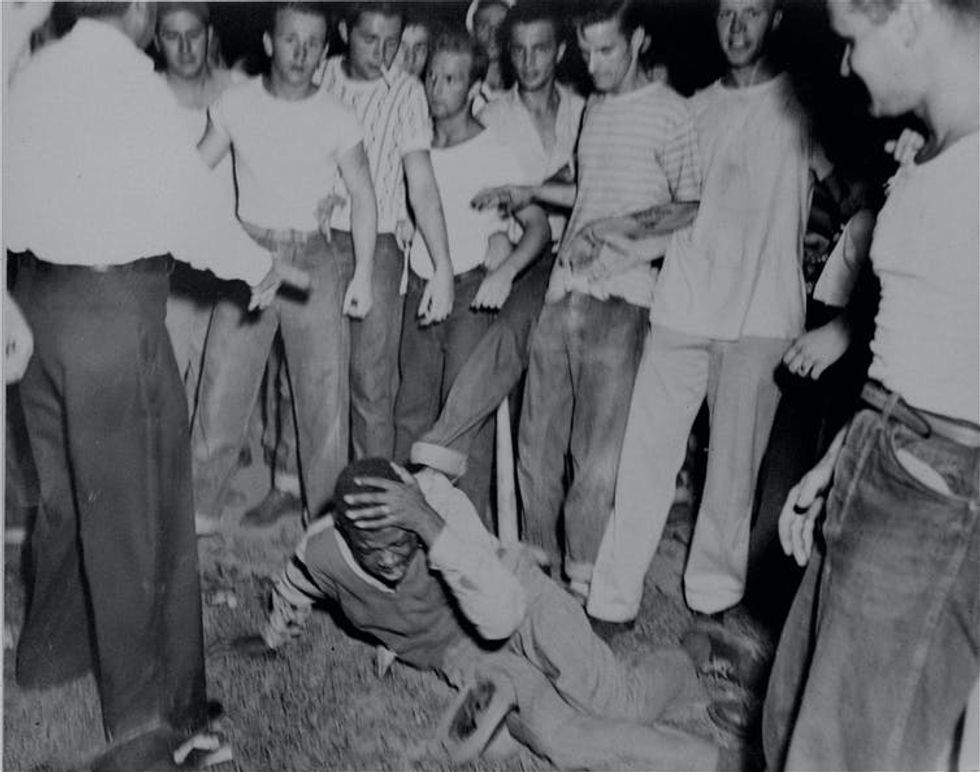 Surrounded by a group of white youths, an unidentified black man grimaces as a policeman tries to halt an attack on him in St. Louis, Missouri, in 1949.

These spaces provoked the most intense fears of racial mixing among young men and women. Scantily clad bathers flirting and playing raised the specter of interracial sex and some feared for young white women’s safety.

Some white owners and customers believed that recreation only could be kept virtuous and safe by excluding African Americans and promoting a sanitized and harmonious vision of white leisure. However, my work shows that these restrictions simply perpetuated racial stereotypes and inequality.

This recreational segregation had a heartbreaking impact on African American children. For example, in his 1963 “Letter from Birmingham Jail,” Martin Luther King Jr. described the tears in his daughter’s eyes when “she is told that Funtown is closed to colored children.”

Major civil rights campaigns targeted amusement park segregation, most notably at Gwynn Oak Park in Baltimore and Glen Echo Park outside of Washington, D.C. And other parks, such as Fontaine Ferry in Louisville, were sites of major racial clashes when African Americans sought entrance.

By the early 1970s, most of America’s urban amusement parks like Cleveland’s Euclid Beach and Chicago’s Riverview were closed for good. Some white consumers perceived the newly integrated parks as unsafe and in turn park owners sold the land for considerable profit. Other urban leisure sites – public swimming pools, bowling alleys and roller-skating rinks – also closed down as white consumers fled cities for the suburbs.

The increase of gated communities and homeowners associations, what the political scientist Evan McKenzie calls “privatopia,” also led to the privatization of recreation. Another factor contributing to the decline of public recreation areas was the Federal Housing Administration, which in the mid-1960s openly discouraged public ownership of recreational facilities. Instead, they promoted private homeowner associations in planned developments with private pools and tennis courts.

After the 1964 Civil Rights Act desegregated public accommodations, municipalities followed different strategies intended to keep the racial peace through maintaining segregation. Some simply filled their pools in, leaving more affluent residents the option of putting in backyard pools. Public pools, also created membership clubs and began to charge fees, which acted as a barrier to filter out those pool managers felt were “unfit.” 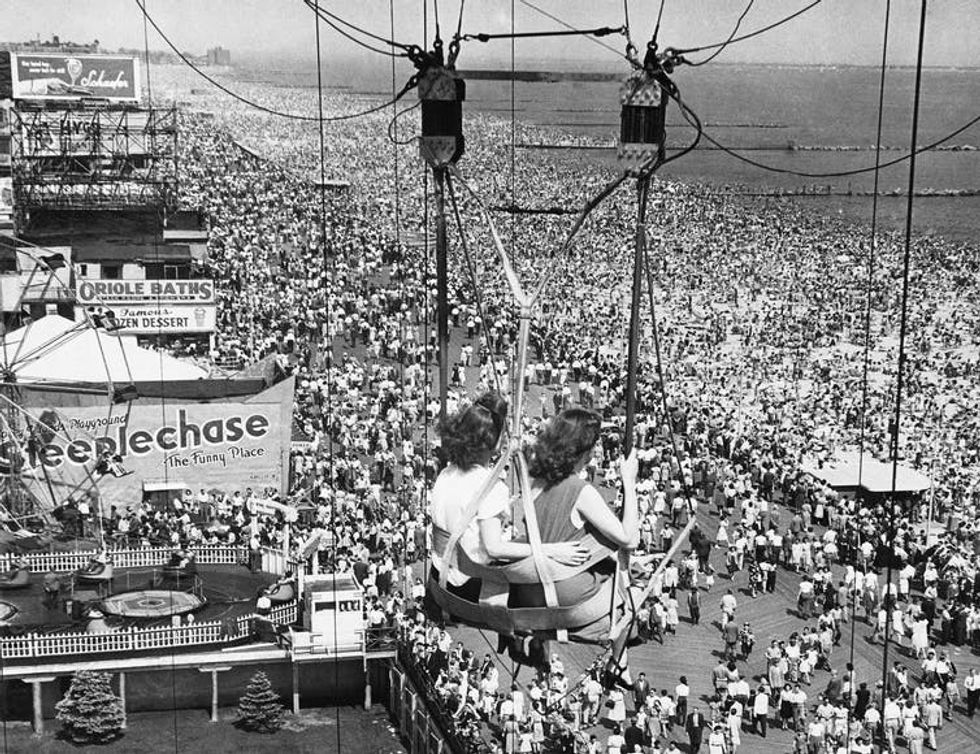 Passengers on the Parachute Jump ride see throngs of people on the boardwalk and beach at the Coney Island Amusement Park in Brooklyn, N.Y., in 1957.

Over time, cities defunded their recreational facilities, leaving many urban dwellers with little access to pools. Ironically, some blamed African Americans for the decline of urban amusements, disregarding the decades of exclusion and violence they had experienced.

The racial stereotypes that justified swimming segregation are not often openly expressed today. However, we still see their impact on our urban and suburban landscapes. Closed public pools and shuttered skating rinks degrade urban centers.

And there are moments when one hears the direct echo of those earlier struggles. In 2009, for example, the owner of a private swim club in Philadelphia excluded black children attending a Philadelphia day care center, saying they would change the “complexion” of the club.

In 2015 in a wealthy subdivision outside of Dallas, police targeted black teenagers attending a pool party.

These incidents, and our collective memories, are explicable only in the context of a rarely acknowledged history.