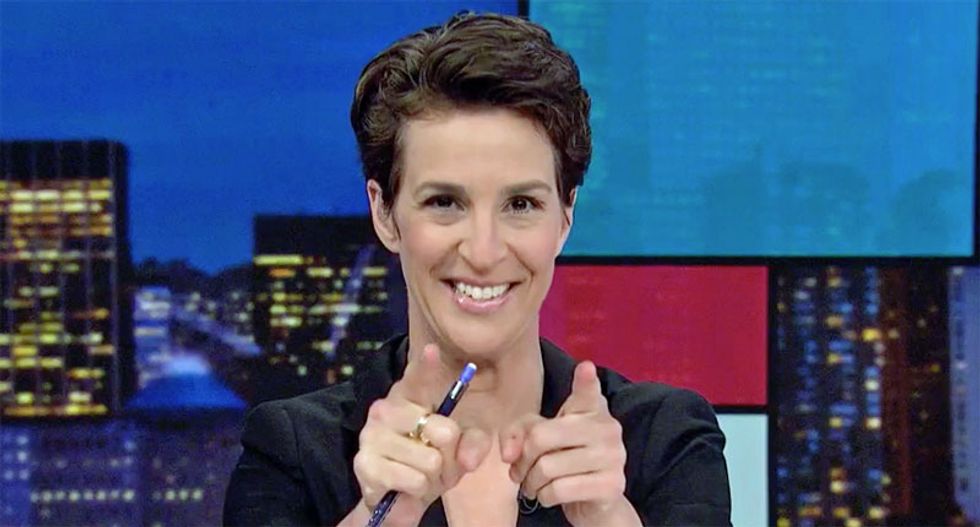 "If the Fox News channel is insufficiently pro-Trump for you, you may or may not know there is another boutique little news outlet that is designed specifically for Trump megafans called One America, One America News Network," she explained.

"President Trump started quoting this little news outlet and frequently telling people they should be praising their ratings, the highest possible praise from this president," she said, putting two tweets on screen.

"Today has been a more-ridiculous-than-most day in the news, there is a ton going on, we have a busy show," she noted. "But I have to tell you, perhaps the single most perfectly formed story of the day -- the single most sparkling story of the entire day is this scoop from reporter Kevin Poulson at The Daily Beast who said Trump’s favorite more Trumpier than Fox TV network that the president has been promoting and telling everyone they should watch and is better than Fox, turns out that network has a full-time on-air reporter who covers U.S. politics who is also, simultaneously, on the payroll of the Kremlin."

"At the same time he works for Trump’s favorite One America News team, he is being paid by the Russian government to produce government-funded, pro-Putin propaganda for a Russian government-funded propaganda outfit called Sputnik," she reported. "Sputnik, of course, had a key role in the intervention in the 2016 election to help Trump, according to the Intelligence Community's assessment of that attack. Sputnik is also formally registered with the U.S. Justice Department as an agent of a foreign power."

"There is a lot of news today, but among the giblets the News Gods dropped off their plates for us to eat off the floor today is the actual news that this super right-wing news outlet the president endorsed as a preferable alternative to Fox News -- because he thinks Fox is insufficiently pro-Trump and he like this other outlet better -- they share staff with the Kremlin," she continued.

"What?" she asked again.

"It’s an easy thing to throw out, like an epitaph in the Trump era, 'Hey, that looks like Russian propaganda.' In this case, the most obsequiously pro-Trump right-wing news outlet in America literally is paid Russian propaganda. Their on-air politics reporter is paid by the Russian government to produce propaganda for that government," she explained.

Maddow explained what she expects will come next.

"It makes it easier to get the message," she added.

According to a report from the New York Times, analysts and experts who follow online trends with regard to threats of political violence are warning the U.S. is moving into dangerous territory as the 2022 midterm election day grows closer.

As the Times' Ken Bensinger and Sheera Frenkel wrote, there have been upticks in calls for a civil war since the FBI initiated a search of Donald Trump's Mar-a-Lago resort seeking stolen government documents and then again when President Joe Biden called the former president and "MAGA Republicans" a threat to “the very foundations of our republic.”

Donald Trump has asked the U.S. Supreme Court to intervene in the Mar-a-Lago documents case, but a legal analyst told MSNBC's "Morning Joe" that his effort will likely fail.

The former president asked the court to require more than 100 classified documents be included in a review by the special master in an apparent attempt to stall the investigation, but former FBI official Chuck Rosenberg explained why the court Trump helped shape would probably not rule in his favor.