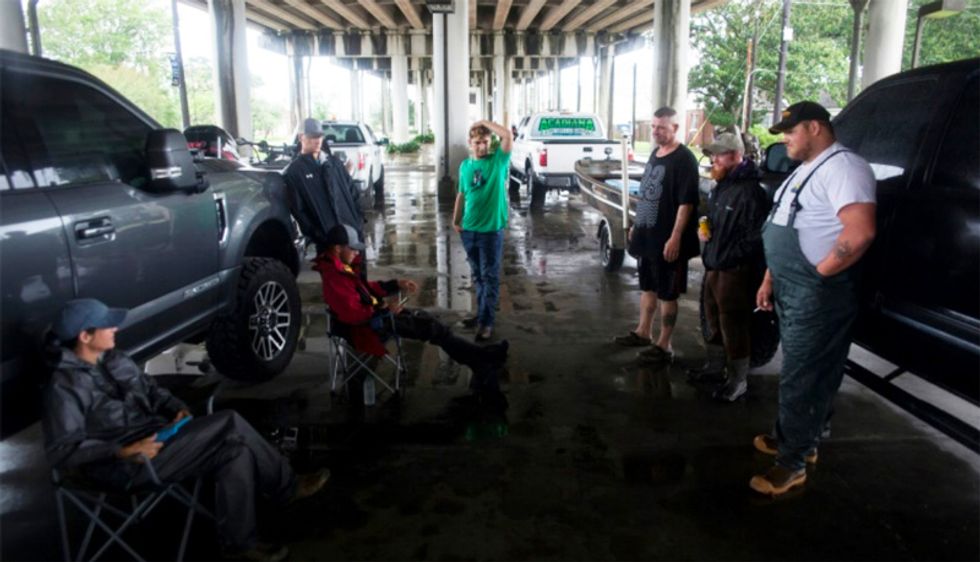 Authorities warned of heavy rain and possible tornadoes throughout Sunday as major storm Barry buffeted Louisiana, though there were few indications of widespread flooding.

After briefly becoming the first hurricane of the Atlantic season, Barry was downgraded to a tropical storm after making landfall -- but it nevertheless packed a serious punch as it moved inland.

All flights in and out of the airport in the state's biggest city New Orleans were cancelled, thousands evacuated their homes, tens of thousands lost power and first responders were poised for action.

Fears that the levee system in New Orleans could be compromised eased after the Army Corps of Engineers voiced confidence that it would hold, but Mayor LaToya Cantrell urged residents not to be complacent.

"We are not in any way out of the woods," she said, adding that flash flooding could still occur into Sunday.

Louisiana Governor John Bel Edwards said the storm would intensify into Sunday, with many areas seeing more rain overnight than they had during the day.

"Don't let your guard down thinking the worst is behind us," he told a press conference.

At 4:00 am (0900 GMT), the storm was packing winds of 45 miles (75 kilometers) per hour, the National Hurricane Center said, and was located west of the city of Alexandria in central Louisiana, moving north at eight mph.

"Barry is still very much a dangerous storm with impacts only increasing through Sunday," the National Weather Service said in a tweet.

"He asked me to tell the people of Louisiana hello and said he is pulling for us," Edwards tweeted. "I thanked President Trump for his support and for approving our request for assistance."

The storm was expected to chug north across inland Louisiana into Sunday, while tornado warnings were issued for areas of New Orleans and parts of the neighboring state of Mississippi.

Rainfall estimates had been lowered to between eight and 15 inches (20 to 38 centimeters) but rivers and canals across South Louisiana were full.

The heavy winds scattered tree branches across roads and knocked over road signs, and in St. John's Parish next to New Orleans, local television footage showed some areas under two or more feet (60 centimeters) of water.

The eye of the storm made landfall at Intracoastal City, a speck of a town with a few houses and businesses. Part of the main road was flooded Saturday afternoon, as were some waterfront businesses, with water rising by the minute.

The Atchafalaya River swallowed the waterfront pedestrian promenade in Morgan City, which was entirely without power, as about 10 members of America's Cajun Navy citizen rescue group assembled under a highway overpass.

They have been conducting volunteer rescues since Hurricane Katrina in 2005, and were equipped with five flat-bottom rescue boats, a high-clearance, military-style truck and 86 boats staged in the region in preparation for the latest storm.

For many, the storm and potential for large-scale flooding revived unpleasant memories of deadly Hurricane Katrina.

Thousands packed up and left their homes as floodwaters hit low-lying areas like Plaquemines Parish, where road closures left some communities isolated.

Others hunkered down to ride out the squall, despite mandatory evacuation orders and the risk of dangerous storm surges.

"Category one, I'd say, is not much to worry about. A one? That's a thunderstorm. I'll be back to work Monday," William Manuel, a maintenance worker living in Bayou Vista, not far from Morgan City, told AFP.

But experts say Louisiana is facing an extraordinarily dangerous confluence of conditions.

US Senator Bill Cassidy said officials with the Army Corps of Engineers told him they were "confident" that the 20-foot-high levee system protecting New Orleans, a city of 400,000, would hold.

In 2005, Katrina -- the costliest and deadliest hurricane in recent US history -- submerged about 80 percent of New Orleans after the city's levee system failed, causing some 1,800 deaths and more than $150 billion in damage.