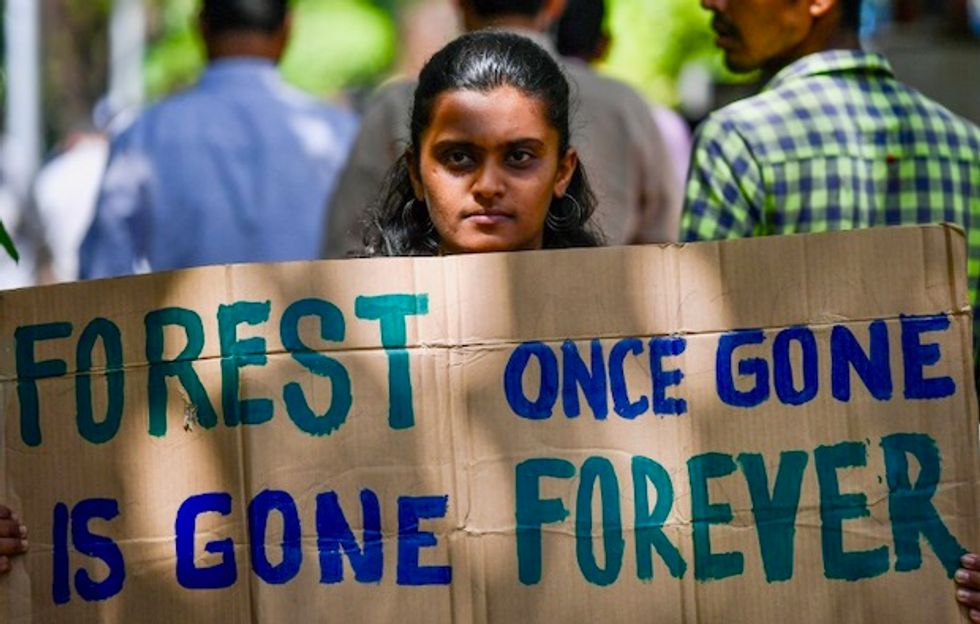 The leaders of the G7 club of rich countries meet in southwest France on Saturday, a gathering clouded by the burning Amazon, diving stock markets and their own stark divisions, giving little grounds for optimism.

US President Donald Trump, who landed in France around midday, faces a mass protest outside the Atlantic resort of Biarritz where the summit is taking place, though 13,000 police have been deployed to keep them far from view.

Thousands began rallying Saturday some 30 kilometres (20 miles) south of the G7 gathering at the border town of Hendaye for a march over the Bidassoa River toward the Spanish town of Irun.

Red, white and green Basque flags waved above a crowd that included anti-capitalists, environmental activists as well as a few dozen of France's "yellow vest" anti-government protesters, according to AFP journalists at the scene.

"It's important to show that people are mobilised and do not accept the world they're offering us," said Elise Dilet, 47, of the Basque anti-globalisation group, Bizi.

Police said 17 people had been arrested as of Friday night amid clashes with protesters camped out near Hendaye.

The summit was already shaping up to be a difficult encounter with Western relations badly strained by Trump, but images of billowing smoke above the Amazon rainforest have lent it a new, even darker mood.

"The Amazon is burning and it's something that concerns everyone," Macron told the Konbini website on Friday.

He has led international pressure on Brazilian President Jair Bolsonaro over the fires, telling him Paris would block efforts to seal a major trade deal between the EU and Latin America.

He has called for emergency talks at the G7, which runs until Monday, to find "concrete measures" to tackle the crisis.

"We are going to try and mobilise everyone to raise funding for reforestation as quickly as possible," Macron added on Friday.

Talks in the beach resort, known for fierce rainstorms that blow in from the Atlantic, will also be dominated by the darkening clouds over the world economy.

Wall Street stocks tanked on Friday after Trump escalated his trade war with China that is seen as responsible for a global slowdown.

AFP /Key facts on the G7 member countries, ahead of a summit in Biarritz, France on August 24-26.

"We don't need China and, frankly, would be far... better off without them," Trump tweeted on Friday, saying US companies were "hereby ordered to immediately start looking for an alternative to China."

His outburst came after China imposed tariffs on US imports worth $75 billion in response to an earlier round of American measures.

"We see trade tensions as the single most important threat to global growth," a top EU official told reporters ahead of the G7 summit on condition of anonymity.

And as he left for Biarritz, Trump also fired a salvo at France, threatening to slap heavy tariffs on its wine in response to its move to impose a sales tax on tech giants like Facebook, Apple and Google.

"Those are great American companies, and frankly, I don't want France going out and taxing our companies. Very unfair," he told reporters outside the White House.

"And if they do that, we'll be taxing their wine... like they've never seen before."

Though the Amazon fires and trade will dominate the agenda, the G7 meeting will also be the full international debut of British Prime Minister Boris Johnson.

He will meet Trump for the first time as leader and is expected to discuss the UK's impending exit from the European Union, which the US president has enthusiastically backed.

"My message to G7 leaders this week is this: the Britain I lead will be an international, outward-looking, self-confident nation," he said on the eve of the summit.

But though Johnson needs Trump's support for a free-trade deal, he is at odds with him on a range of issues including the Iran nuclear crisis, climate change and global trade.

"Trade tensions are unsettling the global economy," a British official told reporters. "There are differences with the US about how to resolve global trade imbalances."

Trump will find himself under pressure from the Europeans, particularly Macron, to ease off on his policy of "maximum pressure" on Iran over its nuclear programme.

Since pulling out of the landmark 2015 nuclear agreement limiting Tehran's nuclear programme, Trump has slapped crippling sanctions on the Iranian economy.

Macron wants him to put a "pause" on the policy, an aide said recently, which would enable talks to find a new diplomatic solution to the crisis.

Iranian Foreign Minister Mohammad Javad Zarif told AFP on Friday that Macron's "suggestions" to find a way out of the current impasse were "moving in the right direction."