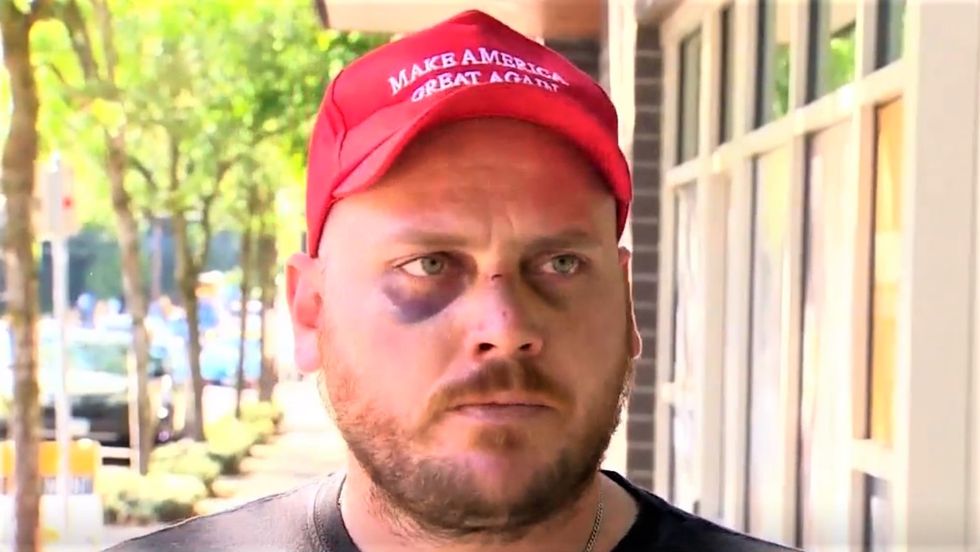 A Trump supporter who claimed that he was physically attacked in a bar just for wearing a "Make America Great Again" hat now admits that he lied about having served in the military during a separate confrontation in a bar that was caught on camera.

A video obtained by local news station KATU shows that Portland, Oregon-based Trump supporter Luke Lenzner went on an angry verbal tirade against patrons at the Growler’s Taproom bar just hours before he was allegedly assaulted at a different bar in the area.

At one point in the video, Lenzner can be heard yelling, "I served for you... f*ck you!" at patrons.

But when asked by KATU about his military service, Lenzner admitted that he never served but pointed out that he had family members who did.

"He said his comment in the video about serving was said in the heat of the moment and that it came out wrong," reports KATU. "He said he regrets saying it."

Lenzner went to another bar with his wife after being asked to leave Growler's Taproom, which was where he said he was assaulted by two people who were offended by his hat. The two people accused of assaulting Lenzner, however, say that he was verbally and physically aggressive with them and appeared to be spoiling for a fight.

Specifically, reports KATU, one of the alleged assailants said in an affidavit that Lenzner came out of the bar and yelled at her, "B*tch do you like my hat?" The two then got into a verbal argument that escalated until Lenzner shoved her companion, KATU reports.

Watch KATU's coverage of the story below.