California wildfires signal the arrival of a planetary fire age 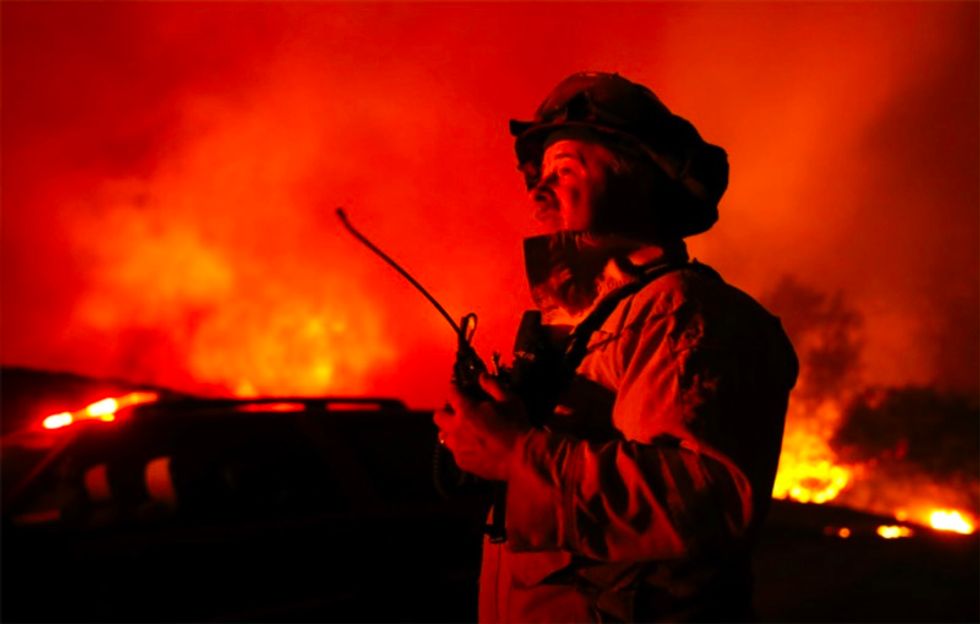 Another autumn, more fires, more refugees and incinerated homes. For California, flames have become the colors of fall.

Free-burning fire is the proximate provocation for the havoc, since its ember storms are engulfing landscapes. But in the hands of humans, combustion is also the deeper cause. Modern societies are burning lithic landscapes - once-living biomass now fossilized into coal, gas and oil - which is aggravating the burning of living landscapes.

The influence doesn’t come only through climate change, although that is clearly a factor. The transition to a fossil fuel civilization also affects how people in industrial societies live on the land and what kind of fire practices they adopt.

Even without climate change, a serious fire problem would exist. U.S. land agencies reformed policies to reinstate good fire 40 to 50 years ago, but outside a few locales, it has not been achievable at scale.

What were lithic landscapes have been exhumed and no longer only underlie living ones. In effect, once released, the lithic overlies the living and the two different kinds of burning interact in ways that sometimes compete and sometimes collude. Like the power lines that have sparked so many wildfires, the two fires are crossing, with lethal consequences.

As a historian of fire, I know that no single factor drives it. Flames synthesize their surroundings. Fire is a driverless car that barrels down the road integrating whatever is around it.

Climate change acts as a performance enhancer, and understandably, it claims most of the attention because it’s global and its reach extends beyond flames to oceans, mass extinctions and other knock-on effects. But climate change is not enough by itself to account for the plague of megafires. Climate integrates many factors, and so does fire. Their interplay makes attribution tricky.

Instead, consider fire in all its manifestations as the informing narrative. The critical inflection in modern times occurred when humans began to burn fossilized rather than living biomass. That set into motion a “pyric transition” that resembles the demographic transition which accompanies industrialization as human populations first expand, then recede. Something similar happens with the population of fires, as new ignition sources and fuels become available while old ones persist.

In the U.S., the transition sparked a wave of monster fires that rode the rails of settlement – fires an order of magnitude larger and more lethal than those of recent decades. Land clearing and logging slash fed serial conflagrations, which blew up in the late 19th and early 20th centuries, the waning decades of the Little Ice Age. 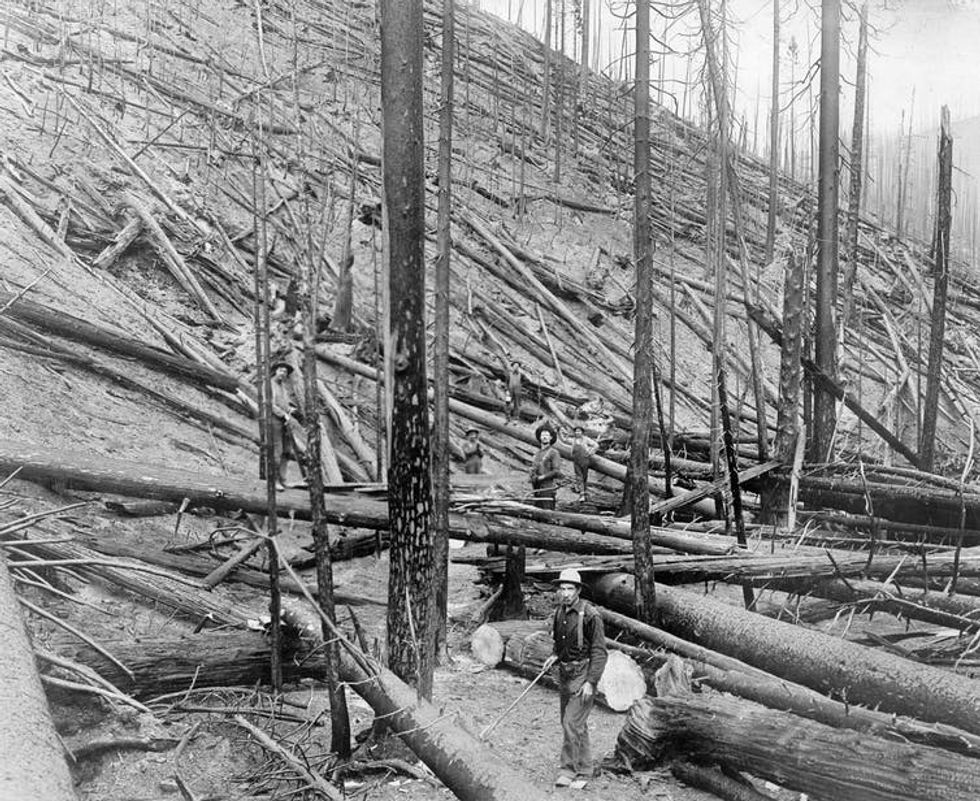 The Great Fire of 1910, which killed 78 firefighters in Idaho (shown) and Montana, led to a half-century of forest management focused on fire suppression.

It was a period of flame-catalyzed havoc that inspired state-sponsored conservation and a determination to eliminate free-burning flame. Led by foresters, the belief spread that fire on landscapes could be caged, as it was in furnaces and dynamos.

Eventually, as technological substitution (think of replacing candles with lightbulbs) and active suppression reduced the presence of open flame, the population of fires fell to the point where fire could no longer do the ecological work required. Meanwhile, society reorganized itself around fossil fuels, adapting to the combustion of lithic landscapes and ignoring the fire latent in living ones.

Now the sources overload the sinks: Too much fossil biomass is burned to be absorbed within ancient ecological bounds. Fuels in the living landscape pile up and rearrange themselves. The climate is unhinged. When flame returns, as it must, it comes as wildfire.

Welcome to the Pyrocene

Widen the aperture a bit, and we can envision Earth entering a fire age comparable to the ice ages of the Pleistocene, complete with the pyric equivalent of ice sheets, pluvial lakes, periglacial outwash plains, mass extinctions, and sea level changes. It’s an epoch in which fire is both prime mover and principal expression.

Even climate history has become a subset of fire history. Humanity’s firepower underwrites the Anthropocene, which is the outcome not just of human meddling but of a particular kind of meddling through humanity’s species monopoly over fire.

The interaction of these two realms of fire has not been much studied. It’s been a stretch to fully include human fire practices within traditional ecology. But industrial fire, unlike landscape fires, is solely a product of human finagling, and so has stood outside the bounds of ecological science. It’s as though the intellectual sink for understanding can no more hold the new realm of burning than nature can its emissions.

Yet in humanity – the keystone species for fire on Earth – those two arenas of earthly burning, like smoke from separate fires drawn into a single convective column, are merging. Their give and take is reshaping the planet.

In the developed world, industrial combustion arranges agriculture, built environments, peri-urban settings and reserves for wildlands – all the stuff available for landscape fire. Societies even fight landscape fire with the counterforce of industrial fire in the form of pumps, engines, aircraft and vehicles to haul crews. The interaction of the two realms of fire determines not only what gets burned, but also what needs to be burned and isn’t. It changes the road fire drives down.

Add up all the effects, direct and indirect – the areas burning, the areas needing to be burned, the off-site impacts with damaged watersheds and airsheds, the unraveling of biotas, the pervasive power of climate change, rising sea levels, a mass extinction, the disruption of human life and habitats – and you have a pyrogeography that looks eerily like an ice age for fire. You have a Pyrocene. The contours of such an epoch are already becoming visible through the smoke.

If you doubt it, just ask California.