Here’s why giant inflatable rats are under attack in America 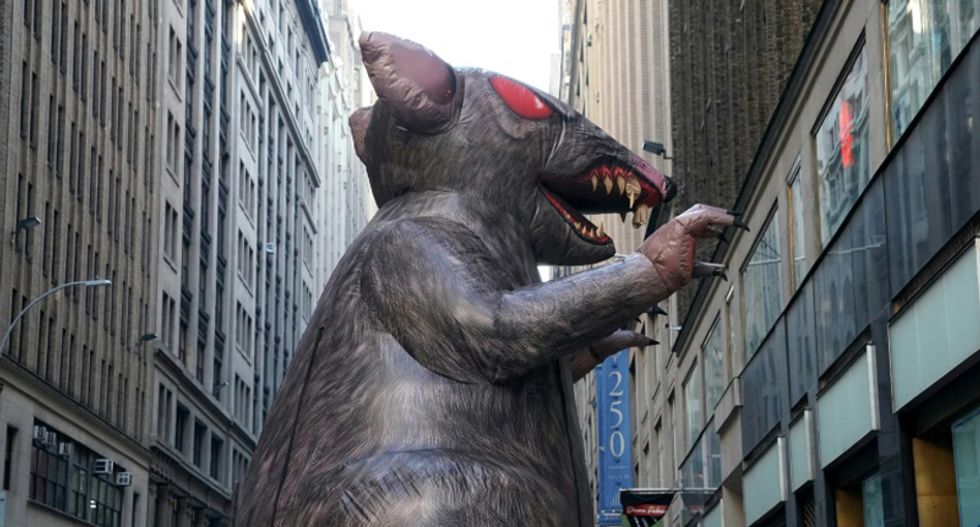 New Yorkers are used to seeing rats on the street but they are not always small, furry ones. Sometimes they are inflatable and taller than giraffes.

American unions use giant balloon rodents as a protest symbol, parking them outside company offices to highlight labor disputes.

His organization, representing laborers, set up the rat outside the Manhattan offices of a developer it accuses of paying construction workers non-union wages one recent morning.

"The public stop and want to know what's going on. It's a great tool to make folks aware," the 37-year-old told AFP.

Inflatable rats were first used by a union in Chicago around 30 years ago. They started becoming a familiar sight on the streets of New York in the late 1990s.

"Scabby the rat," as it has become known, has its own Twitter page and even featured in an episode of hit mob drama "The Sopranos."

Not all passers-by know what the inflatables are about though, so union workers stand on the sidewalk and hand out information about each specific dispute.

"I first thought it was because of all the rats on the subway. Then I read the leaflet," 38-year-old hair stylist Zarinah Ali told AFP.

The inflatables are made by Big Sky Balloons, an Illinois-based company which proudly boasts on its website to be Scabby's creator.

They can reportedly cost thousands of dollars.

New York unions own dozens of the balloons, which range in height from six feet (1.83 meters) to 25 feet. Some look more fierce than others.

They also have inflatables depicting fat cats smoking cigars while clutching bags of money, pigs in waistcoats and top hats and a cockroach.

"If we were to assemble them all on the same day it would look like Macy's parade!" union leader Mike Hellstrom told AFP, referencing New York's annual Thanksgiving day march.

Hellstrom, who is credited with introducing the rats to New York, says they are hideous, looking to give "a true representation of what exploitation looks like."

Management often, understandably, get irritated by the depiction and have even burst rats with a pin on occasion.

The inflatables are increasingly coming under a more serious form of attack though, which threatens to exterminate them and raises arguments about freedom of expression in America.

His office has since filed cases saying the inflatables amount to illegal picketing.

Earlier this year, the NLRB went to court to try to prevent a union from displaying Scabby the rat outside a supermarket on New York's Staten Island.

A judge sided with the union, upholding previous rulings that the rat is protected by America's first amendment, which provides for freedom of speech and peaceful assembly.

The legal battle is ongoing though, meaning the fight is far from over.

"They are still aggressively trying to condemn this symbol, basically what would be the first illegal symbol in American jurisprudential history," the union's lawyer in the case, Tamir Rosenblum, told AFP.

Labor historian Joshua Freeman, a professor at City University of New York, says the labor relations board has always been politicized but seems more concerned presently with protecting employers than employees.

"(They're thinking) 'We've got our guy in the White House. Let's ride this wave as far as we can go," he told AFP.

As far as union bosses are concerned, the rats will never be driven from New York's streets.

"They can continue to try to attack us, but it will be met with 100 percent resistance. I'm prepared to get arrested for the rat," said Hellstrom.