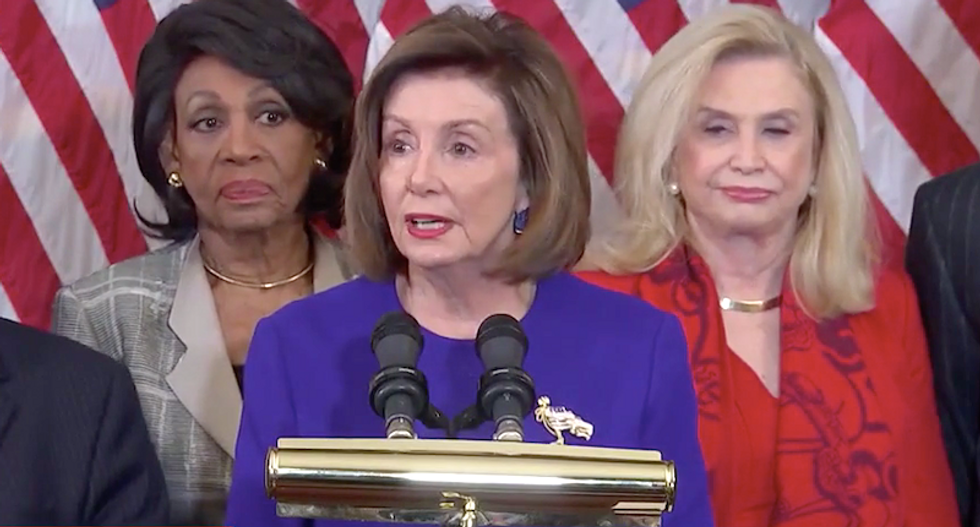 On Tuesday, Democratic leaders in the House of Representatives announced that they would move forward with two articles of impeachment — involving abuse of power and obstruction of Congress — against President Donald Trump.

At first, I shared the frustration of many liberals and progressives that these articles are too limited in scope, and leave a great many of Trump’s apparent misdeeds unmentioned. But further reflection and exchanges with legal experts have convinced me that appearance is misleading. In fact, Democrats have performed a deft feat. In a single stroke — OK, two strokes — they have elevated the process of holding Trump accountable above the realm of partisan politics, and have also given the Democratic nominee (whoever that is) an excellent case to use against Trump in next year’s presidential election. The challenge for Democrats going forward will be to keep that nonpartisan outlook in mind — while understanding that, ultimately and unfortunately, the only possible way to hold Trump accountable will be through partisan politics.

First, though, let’s talk about the beauty of those articles of impeachment.

Those two articles, in the words of Laurence Tribe, the eminent Harvard Law professor and constitutional expert, “charge President Trump with massive crimes against the Constitution and against the American people.” Tribe shared his thoughts on the House Judiciary Committee’s proposed articles with Salon by email on Tuesday morning, saying they lay out the most serious abuses of power ever alleged against a sitting president:

The abuses of power they charge, including unforgivable and ongoing obstruction of congressional efforts to invoke the impeachment power to hold the President accountable to his Oath of Office, with ‘actions . . . consistent with [his] previous efforts to undermine United States Government investigations into foreign interference with United States elections’ in 2016, are the most serious ever charged against any sitting president. And the evidence supporting the two charges, which the Articles clearly and unambiguously summarize, is so overwhelming that only an unwillingness or inability to face the facts could lead anyone to conclude that President Trump is innocent of the accusations soberly leveled in the Articles.

Barbara McQuade, a former U.S. attorney for the Eastern District of Michigan — also corresponding by email — fleshed out the exact nature of the charges made against Trump in the articles of impeachment.

The allegations in the impeachment articles reflect the testimony of the fact witnesses and the professors who explained that impeachment is about abuse of power, not traditional violations of criminal statutes. Framing President Trump’s misconduct in terms of abuse of power properly focuses on the threat that requires his removal — soliciting foreign influence, subverting an election and using his power to advance self interest. Impeachment is not about punishment. It is about protecting the country from harm.

David Priess, former intelligence officer and author of the book “How to Get Rid of a President: History’s Guide to Removing Unpopular, Unable or Unfit Chief Executives,” offered similar observations, also by email.

“The articles of impeachment as released today overlap significantly with those against Presidents Nixon and Clinton, at least regarding form and in the phrasing of some specific clauses,” Priess observed. He also offered a theory about why the Judiciary Committee, “at least for now, avoided including an article specifically about obstruction of justice,” which played a major role in articles of impeachment against both Richard Nixon and Bill Clinton.

House Democrats this time around, Priess suggested, “clearly wanted to avoid a long list of articles against Trump, however deserved, that approached those used against Andrew Johnson back in the 1860s. Then, drafters even included articles castigating Johnson’s speeches that attempted to ‘bring into ridicule, hatred, contempt and reproach, the Congress of the United States’ and attacking him bringing ‘disgrace and ridicule to the presidency.’ Today’s articles are more focused and are less easily dismissed as pure politics.”

That sense of clarity and focus could be found in the remarks of Judiciary Committee Chair Jerry Nadler, D-N.Y., in announcing that the articles of impeachment had been introduced.

“Our president holds the ultimate public trust,” Nadler said in a press conference on Tuesday morning. “When he betrays that trust and puts himself before country, he endangers the Constitution, he endangers our democracy, and he endangers our national security.”

As recently as last March, I believed  House Speaker Nancy Pelosi was right to avoid impeaching Trump, since she knew it was unlikely (if not impossible) that the Senate would ever vote to convict him. Pelosi’s claim that impeaching Trump was not “worth it” was clearly based on political calculation: The most a Senate trial can do is expose the president’s crimes to the world and hope that will persuade Americans to vote against him in 2020. The risk was obvious: The president’s inevitable acquittal in the Republican-led Senate would be spun as a vindication, regardless of the case against him.

At least four things have changed since then:

The closest analogy that comes to mind is the presidency of Richard Nixon. During the 1968 election, Nixon meddled in peace talks that could have ended the Vietnam War in an attempt to undermine the Democratic nominee, Vice President Hubert Humphrey. Nixon got away with that and, four years later, ordered the Watergate burglary complex in an attempt to sabotage his 1972 opponent, Sen. George McGovern of South Dakota. The parallels between Nixon and Trump — who were both mentored by Roger Stone, interestingly enough — should be obvious.

Those four changes have made it clear that Trump is a clear and present danger to the integrity of American democracy and that he must be stopped. If the American people send the message that presidents or presidential candidates can violate the most basic democratic norms, not to mention the criminal statutes, in order to win elections, democracy will become obsolete. There is no point in pretending that the people have any meaningful say in who leads and represents them if those people are free to lie, cheat, abuse their power and work with foreign governments in order to corrupt our democratic process — and do so with absolute impunity, as long as they hold power or belong to the right party.

Today may be remembered as the day when Democrats struck a mighty blow for justice, and in the process laid the foundations for the end of Donald Trump’s corrupt regime in 2020. The other, more painful possibility, of course, is that these articles will be remembered as a quixotic protest against the dying of the light.