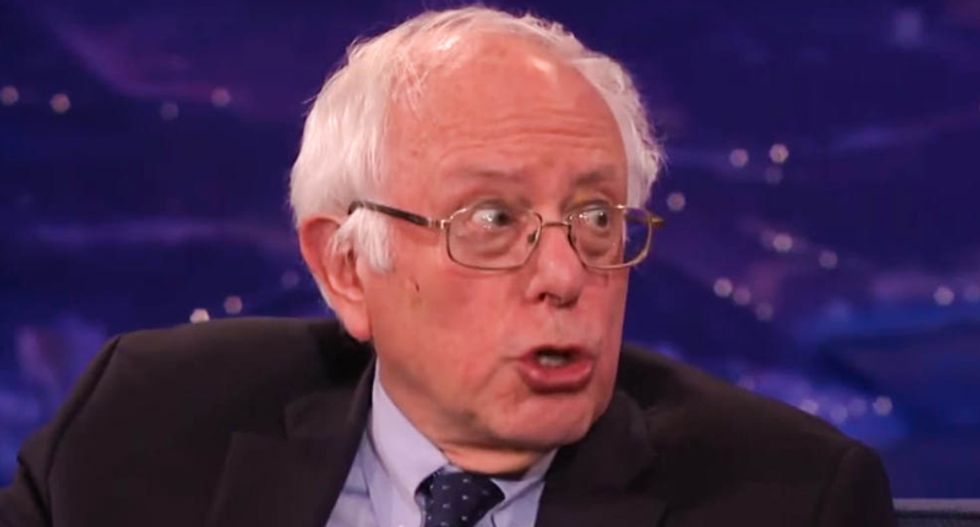 Amid fresh warnings that progressives in the U.S. should be on guard against efforts by the corporate media to sow division between the Warren and Sanders campaigns, CNN came under fire Monday afternoon after publishing an unsubstantiated hit piece that cited anonymous sources—not even in the room at the time—claiming Bernie Sanders privately told Elizabeth Warren in 2018 that a woman could not win the presidency.

Sanders told CNN in "an aggressive, on the record pushback" that the claims where absolutely false. Kristen Orthman, the Warren campaign's communication director, on the other hand, declined to comment for the story by CNN political correspondent MJ Lee.

"It is ludicrous to believe that at the same meeting where Elizabeth Warren told me she was going to run for president, I would tell her that a woman couldn't win," Sanders told CNN. "It's sad that, three weeks before the Iowa caucus and a year after that private conversation, staff who weren't in the room are lying about what happened. What I did say that night was that Donald Trump is a sexist, a racist and a liar who would weaponize whatever he could. Do I believe a woman can win in 2020? Of course! After all, Hillary Clinton beat Donald Trump by 3 million votes in 2016."

Lee reports that the claims of what was said at the meeting—which took place at Warren's apartment in Washington, D.C. in December of 2018, before either had announced their candidacy—are based on the accounts of four people, none of whom were actually in the room when Sanders and Warren spoke. Two of them were "people Warren spoke with directly soon after the encounter," Lee reported, and the other two were "people familiar with the meeting."

Critics of the reporting, which immediately sparked prominent headlines elsewhere and gained traction on social media, said the story is the kind of irresponsible journalism designed to sow division and little more.

"Direct denial from the accused source and a 'no comment' from the camp it comes from... four anonymous sources, none of whom were in the room," commented journalist Jack Crosbie, formerly of Splinter News. "Haven't been an editor in a while but that's gonna be a 'Yikes, let's hold this' from me."

Others highlighted the fact that Ortham, though given an opportunity, declined to comment on behalf of the Warren campaign. "So Sanders denies and Warren's team won't comment," political commentator Jordan Uhl said of CNN's decision to publish the piece. "Fuck it, let's run it anyway."

Numerous people also took the opportunity to show just how consistent Sanders has been on the question of a woman, including Warren, running for president—and winning—going back decades:

With some critics focused their ire on Warren for not immediately pushing back against the reporting—which as of this writing her campaign has not done—other voices warned that there could be other forces at play.

"Lightly sourced and denied by Sanders. The liberal media desperately wants these candidates and their campaigns to fight over bullshit," warned progressive journalist Sam Adler-Bell. "Before you dig in your heels, ask yourself why that might be."

That kind of warning was also the topic on Monday, prior to CNN's controversial reporting, of a new column by Common Dreams contributor Norman Solomon urging readers to be aware that corporate news outlets, establishment figures in the Democratic Party, and Republicans alarmed by a unified progressive front are all salivating at the prospect that the "nonaggression pact" between Warren and Sanders might be fraying.

Citing a weekend report from Politico—also built on thin evidence—claiming Sanders campaigners were being instructed to "trash" Warren as the candidate of the elite with potential voters, Solomon argued it appeared to be the kind of faux conflict many opponents of the Democrat's progressive wing have "long been yearning for."

While "the media establishment would love to see Sanders and Warren clashing instead of cooperating," warned Solomon, letting that happen would be a strategic mistake.

"It would be a serious error for progressives to buy into corporate media portrayals of the Sanders and Warren campaigns as destined to play a traditional zero-sum political game," wrote Solomon. "The chances are high that by the time the primaries end this spring, Sanders and Warren—as well as their supporters—will need to join forces so one of them can become the nominee at the Democratic National Convention in mid-July."

According to Solomon, "Keeping eyes on the prize this year will require a united front that can strengthen progressive forces, prevent any corporate Democrat from winning the party's presidential nomination, and then go on to defeat Donald Trump."

"Birth of a Nation" is one of the most important films in cinematic history. D.W. Griffith's masterwork is considered by many film scholars and critics to be the first "modern" film: Its cinematography, narrative techniques, and technical innovations set the standard for what would come afterward.

There's a lesson here: A work of art can be extremely important, even groundbreaking, while also embodying — and seeking to legitimize — thoroughly reprehensible social and political values.

According to a new report from The New York Times, then-President Donald Trump pressured "top Justice Department officials" in December of last year to declare that the 2020 election was rigged so he and his allies could bolster their efforts to have the election results overturned.

"The demands were an extraordinary instance of a president interfering with an agency that is typically more independent from the White House to advance his personal agenda," the Times' Katie Benner writes. "They are also the latest example of Mr. Trump's wide-ranging campaign during his final weeks in office to delegitimize the election results."