EU warns UK not to kid itself on 'equivalence' for finance 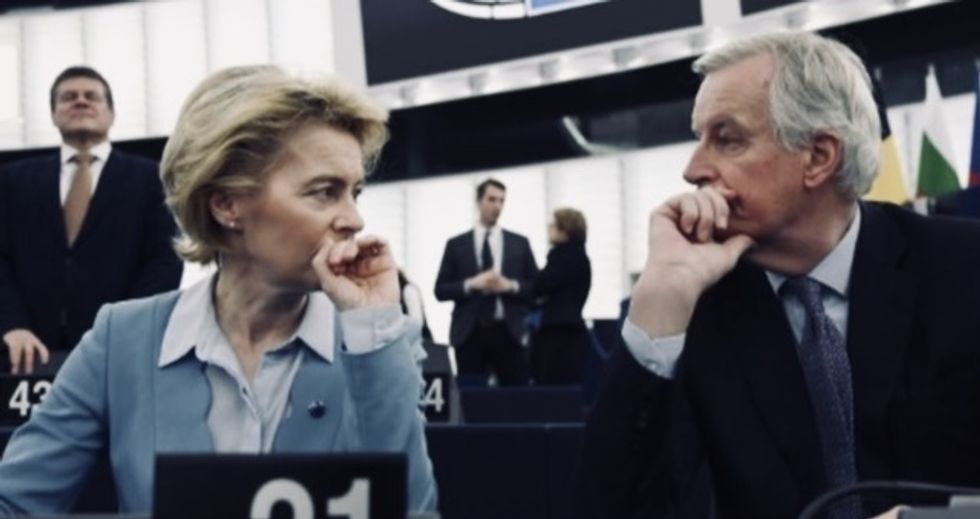 EU chief Brexit negotiator Michel Barnier (right), with European Commission President Ursula von der Leyen (left), tells London not to have any illusions it will get its own way in key financial services talks AFP

Brussels' chief Brexit negotiator on Tuesday brusquely shot down a bid floated by the UK to retain access to the EU market for British financial firms, signalling hardball trade negotiations lie ahead.

"There must be no illusion on this issue: there will be no general, global or permanent equivalence on financial services," Barnier told the European Parliament in the eastern French city of Strasbourg.

That dismissal was backed up by European Commission chief Ursula von der Leyen who said the bloc was "fine" with Britain walking away without a deal if it so chose, although she preferred to see an "ambitious" accord struck.

The blunt language mirrors that being used by Britain, which formally left the EU two weeks ago but which still trades like a member under a transition period ticking down to the end of this year.

The government of British Prime Minister Boris Johnson insists it will not seek to extend the transition.

This week it stepped up warnings to British business to prepare to operate outside the single market from 2021.

But its finance minister, Sajid Javid, on Tuesday argued in an op-ed for London's City AM newspaper that Britain should secure general regulatory "equivalence" for UK financial companies so they would be deemed compatible enough to maintain access to the EU market.

However he also insisted that "from next year, we will have the freedom to make our own rules outside the constraints of the (EU's) single market and customs union". And he stated "there will be differences" between future British financial regulations and EU ones.

Barnier was categorical that Javid's idea of a broad equivalence was not acceptable.

"We are not negotiating these issues with the United Kingdom. We are verifying consistency and where we judge it possible we will give equivalences on one financial industry sector or another," he said.

"Brexit is not business as usual."

The sparring bodes badly for EU-UK negotiations due to begin next month to define future relations.

The EU is putting the final touches on its negotiating mandate for those talks.

Von der Leyen, responding to Britain's moves bracing for a possible no deal on trade, said: "If this is the British choice, well, we are fine with that without any question."

She added however: "I personally believe that we should be way more ambitious" and reiterated Europe's conditions Britain would have to abide by if an accord were to be struck.

The EU insists on a "level playing field" so that Britain does not try to get an unfair trading advantage by getting rid of costly EU standards on labour, the environment and taxes.

Britain, in the lead-up to its January 31 exit from the EU, had said it wanted an ambitious and comprehensive accord with the European bloc.

But since then, Johnson has dialled back on that scope and his government has signalled it is willing to accept trade friction as the cost of exercising sovereignty.

One way Johnson's government is preparing the ground for a possible no deal is to say that it would be happy trading with the EU on the same terms as Australia -- a country currently striving to work out a trade accord with the bloc.

"I was a little bit surprised to hear the prime minister of the United Kingdom speak about the Australian model," von der Leyen said.

"But the European Union does not have a trade agreement with Australia. We are currently trading on WTO terms."

Manfred Weber, the head of the biggest political group in the European Parliament, the conservative EPP, said he was "really worried" about Brexit's impact on the EU, particularly if it encourages populists looking to weaken the bloc.

"Brexit won't be a success in the long term. However, the reality is not decisive but the perception," he told reporters.