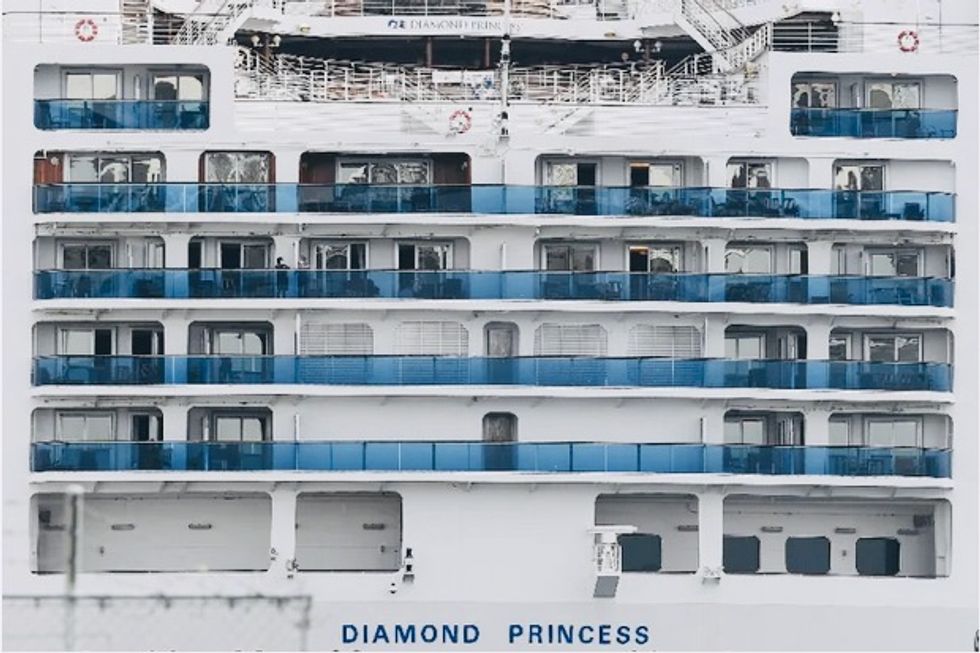 Americans will be removed from a cruise ship quarantined off Japan and flown home, the US embassy said Saturday as dozens more cases of the new coronavirus were diagnosed on board.

At least 285 people on the Diamond Princess have contracted the illness but hundreds of passengers and crew have not yet been tested as they wait in a quarantine that was scheduled to end February 19.

In a message to Americans, the embassy said the US government "recommends, out of an abundance of caution, that US citizens disembark and return to the United States for further monitoring".

It warned that those who return will have to undergo another 14 days of quarantine when they arrive in the United States.

A chartered flight will arrive in Japan on Sunday, but it was not immediately clear when it would leave. The letter said the flight will land at Travis Air Force Base in California, with some passengers continuing to a second air base in Texas.

Japanese public broadcaster NHK said 400 Americans were on board the cruise ship and the plane would leave Tokyo's Haneda airport as soon as early Monday.

"Passengers will be screened for symptoms and we are working with our Japanese partners to ensure that any symptomatic passengers receive the required care in Japan if they cannot board the flight," the message said.

"Should you choose not to return on this charter flight, you will be unable to return to the United States for a period of time," it warned.

The Japanese government was arranging special embarkation procedures for US citizens taking the chartered flight, an official said, adding that "a certain number" of other countries have also shown interest in similar evacuation measures.

While some Americans on the ship have urged their government to extract them from the boat, others on board criticised the plan.

"Incredibly disappointed that the U.S. Government has decided to throw a monkey wrench into the quarantine we have maintained here on board the Diamond Princess," tweeted Matt Smith, an American lawyer.

"The U.S. Government... wants to take us off without testing, fly us back to the U.S. with a bunch of other untested people, and then stick us in 2 more weeks of quarantine? How does that make any sense at all?"

There were more than 3,700 people on the ship when it arrived off the Japanese coast in early February. It was placed in quarantine after a passenger who disembarked in Hong Kong tested positive for the newly named COVID-19.

Those diagnosed on board have been removed to local hospital, with people remaining on the ship told that their quarantine would be over on February 19, two weeks from when it officially began.

But a message broadcast on the ship by the captain on Saturday night cast doubt on that timeline.

"The Japanese government has informed us that they may start a new testing process for guests beginning February 18," the message said, warning that it would take several days to complete and results would not be available for around three days.

"So guests who are tested on February 18 and have negative test results may be able to disembark beginning February 21," the message said.

Those who had close contact with anyone who tested positive would have to restart their quarantine from the date of their last close contact, he added.

And crew on board will go into a new quarantine period once the passengers have left the ship, though details of how long that would last were not immediately clear, the broadcast said.

Japan's government has begun allowing elderly passengers on the ship in poor health to leave and finish their quarantine on land.

Those on board have been mostly confined to their cabins and required to wear masks and keep their distance from others during brief outings on deck.

On Saturday, the health ministry confirmed another 12 infections in Japan, including taxi drivers in Tokyo and patients at a western Japanese hospital where two doctors have already tested positive.

Excluding the cases on the ship, and an infected quarantine officer, Japanese authorities have so far diagnosed at least 52 people with the virus, which has killed more than 1,500 and infected at least 66,000 in China.