How long will coronavirus social distancing measures be necessary? 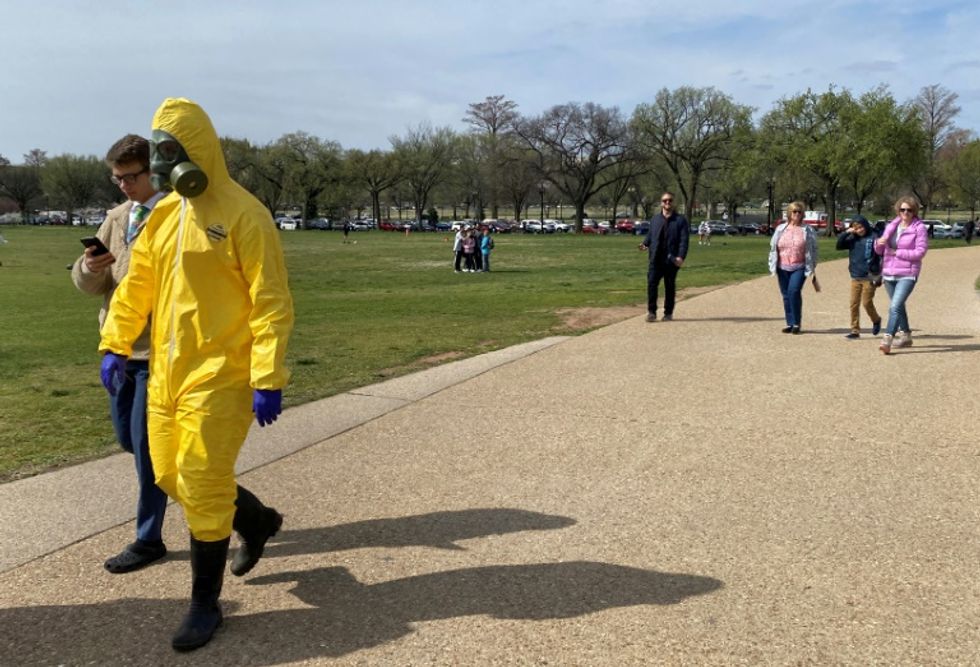 Tourists walk around the Washington monument despite recommendations for "social distancing" to protect against the coronavirus pandemic (Photo: AFP / Daniel SLIM)

After England’s deputy chief medical officer warned on Sunday that the UK’s coronavirus lockdown could last for “six months or more”, experts say that prolonged social distancing measures – if not full-blown confinements – may well be necessary and that some permanent changes to behavior are likely.

As the UK braced for its second week under lockdown following Prime Minister Boris Johnson’s March 23 announcement of unprecedented curbs on peacetime public life, England’s Deputy Chief Medical Officer Jenny Harries set out a medium-term timeline for how the British government might renew restrictions aimed at supressing the coronavirus.

Containment measures must stay in place at the end of the original three-week lockdown period, she said at the British government’s daily coronavirus briefing on March 29: “We must not then suddenly revert to our normal way of living; that would be quite dangerous. If we stop, then all of our efforts will be wasted and we could potentially see a second peak.”

“So I think three weeks for review,” Harries continued. “Two or three months to see whether we’ve really squashed it, with about three to six months ideally, and lots of uncertainty in that, but then to see at which point we can actually get back to normal. It is plausible that it could go further than that.”

Britain is not the only country whose government has warned that coronavirus containment measures will be extended beyond their initial period. Europe’s worst-affected country and the first on the continent to impose a lockdown, Italy has said that its confinement measures could be extended to July 31 despite their crippling economic effects.

Germany’s disease control and prevention agency, the Robert Koch Institute, declared earlier in March that – in an “extreme situation” – restrictions on public life to combat the coronavirus could stay in place for as long as two years until a vaccine is ready for use.

“Some kind of distancing will likely be necessary for at least six months,” William Hanage, an assistant professor of epidemiology at Harvard University, told FRANCE 24. “The distancing measures already in place are stopping the establishment of new cases. Those already infected should be resolved for better or worse in two months, after which the goal will be to prevent the surge we have seen in the first wave happening again.”

The German health institute’s idea that two years of restrictions could be necessary to deal with the coronavirus presents a “fairly likely” scenario, Hanage said, adding that it “depends on what is meant by restrictions; two years of the current state is unlikely, but two years without large gatherings is another thing”.

Of course, completely stopping the transition of the disease would make lockdowns and social distancing unnecessary. This could be achieved one of three ways, explained Greg Gray, a professor and medical epidemiologist at Duke University School of Medicine, in an interview with FRANCE 24.

First, “through a massive, worldwide, safe and effective vaccine programme”. Second, through the “massive employment of some other effective prophylaxis against transmission”, such as effective lockdowns, “combined with intense contact tracing to stop transmission networks”. Or third, “when a large proportion of the human population becomes immune due to infection (known as herd immunity) and the epidemic burns out”. Until then, he said, “the virus will likely continue to circulate wherever it finds new susceptible people to infect”.

Only the second option – lockdowns and tracing transmission networks – appears to be feasible in the short term.

“As the virus has hit the UK and Italy very hard, these countries may see [herd immunity] sooner than most other countries.”

Coronavirus will ‘change our way of life’

By minimising the number of people who contract the coronavirus, lockdowns protect the most vulnerable. However, they do not make people immune. Consequently, scientists expect the virus to resurge when restrictions are lifted. For example, the Imperial College London study – famous for having persuaded Johnson and US President Donald Trump to adopt tougher approaches against the coronavirus – predicted that if confinement measures end after five months, a second wave of infections would emerge in late autumn.

In light of that, “most epidemiologists believe that once the social distancing is relaxed, it needs to be accompanied by widespread testing and isolation of infected persons for 14 days”, Charles Horsburgh, a professor of epidemiology at Boston University, told FRANCE 24.

While governments will need to deploy mass testing and contact tracing,  experts say that people will also need to modify their behaviour to prevent fresh outbreaks.

“This virus has and will continue to change our way of life, our traditions and our human-to-human interactions,” Gray said.

Some changes are already palpable. Face masks, already common in Asia, can now also be seen in Western cities; and in France, the traditional bise – a kiss on each cheek to greet family, friends and colleagues – has become taboo.

Permanent change is on the cards, Lynn Goldman, dean of the Milken Institute School of Public Health at George Washington University, told FRANCE 24. “It could well be that there are fewer people shaking hands and kissing; elbow bumps could become the norm as a form of greeting and I think face masks might become more normal too.”