Hurricane Katrina was a ‘dress rehearsal’ for ‘our current nightmare of bad leadership’: Paul Krugman 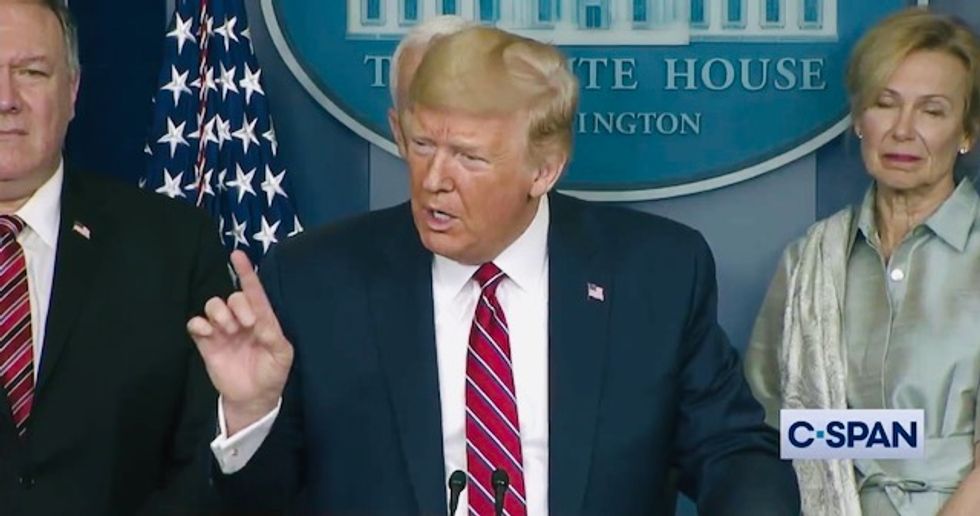 Economist and veteran New York Times columnist Paul Krugman has been vehemently critical of President Donald Trump’s handling of the coronavirus pandemic. And Krugman was drawing an obvious parallel between Trump’s coronavirus response and the George W. Bush Administration’s response to Hurricane Katrina when, on March 29, he tweeted, “Katrina was a dress rehearsal for our current nightmare of bad leadership.”

With that tweet, Krugman linked to his September 2, 2005 column — which found him lambasting President George W. Bush’s administration and asserting, “Why have aid and security taken so long to arrive? Katrina hit five days ago — and it was already clear by last Friday that Katrina could do immense damage along the Gulf Coast. Yet the response you’d expect from an advanced country never happened. Thousands of Americans are dead or dying.”

In that column, Krugman went on to ask, “Did the Bush Administration destroy FEMA's effectiveness? The Administration has, by all accounts, treated the emergency management agency like an unwanted stepchild, leading to a mass exodus of experienced professionals.”

Krugman denounced the Bush Administration as a “can’t-do government” 15 years ago, and similarly — in his March 28, 2020 column — he attacked the Trump Administration for being so slow to respond to the coronavirus crisis.

“Let me summarize the Trump Administration/right-wing media view on the coronavirus: it’s a hoax or anyway, no big deal,” Krugman wrote in that March 28 column. “Besides, trying to do anything about it would destroy the economy. And it’s China’s fault, which is why we should call it the ‘Chinese virus.’”

Krugman added that “epidemiologists who have been modeling the virus’ future spread have come under sustained attack, accused of being part of a ‘Deep State’ plot against Donald Trump — or maybe free markets.”

@paulkrugman The right wing simply doesn't know how to govern, something they've proven time after time. And even i… https://t.co/WIwqmtye4N
— Roger Matile (@Roger Matile)1585514745.0

In recent columns, Krugman has stressed that the GOP’s dysfunction didn’t begin with Trump. And as Krugman sees it, Trump’s coronavirus response is an indictment of the Republican Party in general.

“The bottom line is that as with so many things Trump, the awfulness of the man in the White House isn’t the whole story behind terrible policy,” Krugman wrote in his March 28 column. “Yes, he’s ignorant, incompetent, vindictive and utterly lacking in empathy. But his failures on pandemic policy owe as much to the nature of the movement he serves as they do to his personal inadequacies.”