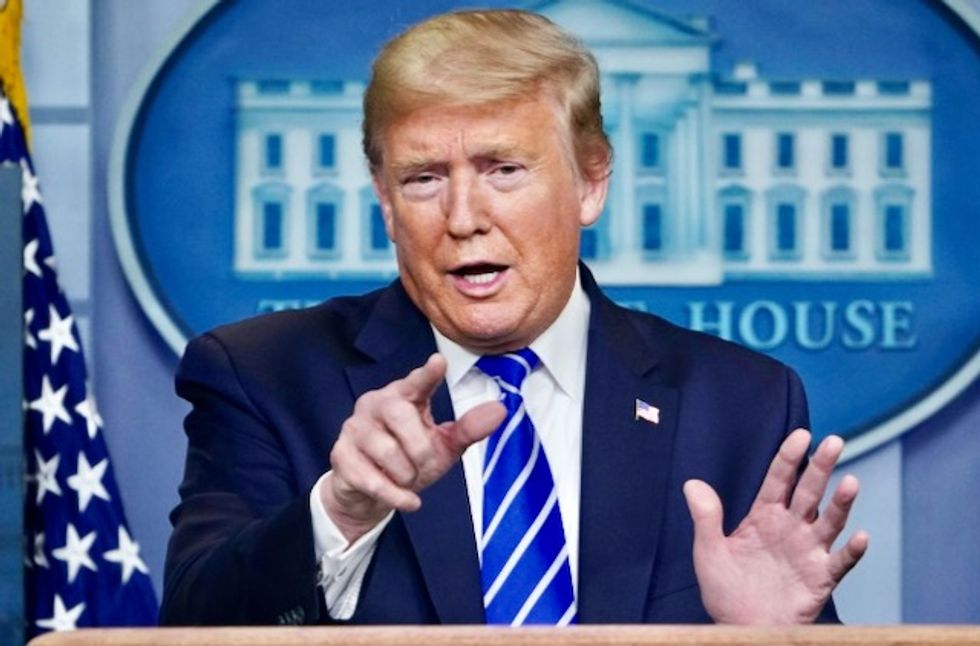 Such a move, say critics, "would be a disaster for millions of Americans who rely on USPS."

President Donald Trump on Friday threatened to withhold all future Covid-19 relief funding from the U.S. Postal Service unless the federal agency dramatically raises its shipping prices—a demand that critics say is ludicrous given the economic calamity the American people and the post office are now facing.

"It is disgusting that Trump would exploit this pandemic to bust postal unions and privatize the most popular government agency in America. If we can bail out large corporations, we can damn well save the Postal Service and protect these essential jobs."

After U.S. Secretary Steven Mnuchin fielded a question about relief funding for USPS from a reporter at the White House during a bill signing ceremony Friday, Trump declared that "the Postal Service is a joke, because they're handing out packages for Amazon and other internet companies, and every time they bring a package they lose money on it."

"The post office should raise the price of a package by approximately four times," the president added. "Four or five times, that's what it should be—or let Amazon build their own post office, which would be an impossible thing to do, because the post office is massive and serves every little piece of the country."

Trump and his allies have frequently claimed that higher package rates on internet shipping companies—Amazon, in particular—could ease the Postal Service's financial troubles. But higher package rates could hurt the agency by artificially raising its prices above those of United Parcel Service and FedEx, analysts say. Higher prices also could impact Amazon, which acts as both retailer and shipper, by forcing it pass off higher costs on its customers to compete.

Critics quickly responded to Trump's comments with warnings about how a price hike could impact both the USPS and consumers.

"At a time when millions of Americans are stuck at home and can't work, Trump is demanding what is basically a tax hike on mail," tweeted the The Atlantic staff writer Adam Serwer, referencing the ongoing coronavirus-related lockdowns and job losses.

Other critics accused Trump of trying to destroy the USPS "to suppress mail-in votes." The public health crisis has sparked calls to rapidly and significantly expand vote-by-mail nationwide to ensure that everyone can safely particpate in future elections. Trump has baselessly attacked mail-in voting as insecure.

The president tweeted Friday afternoon: "I will never let our Post Office fail. It has been mismanaged for years, especially since the advent of the internet and modern-day technology. The people that work there are great, and we're going to keep them happy, healthy, and well!"

The USPS, for its part, recently reiterated its policy of delivering absentee and mail-in ballots "even if no postage has been affixed or if the postage is insufficient." That statement on Wednesday was widely welcomed, with people across the country thanking the agency for "working to save democracy."

U.S. Mail Not for Sale, a worker-led campaign sponsored by the American Postal Workers Union and the National Association of Letter Carriers, circulated a petition urging Congress to provide USPS with "urgent and ongoing financial support from the federal government during this public health and economic crisis."

"The Post Office should raise the price of a package by approximately four times." @realDonaldTrump's message to s… https://t.co/CvOl0X7fVH
— usmailnotforsale (@usmailnotforsale) 1587753545.0

The Postal Service—already under financial duress due to a 2006 congressional mandate requiring the agency to fund retirees' health benefits through 2056—warned earlier this month that without an infusion of cash, the agency could soon face a complete collapse due to revenue loss related to the coronavirus pandemic.

The president's comments from the Oval Office came after the Post reported on Thursday night that Trump was considering using a $10 billion congressionally approved loan to force changes at the Postal Service. That loan was part of the Coronavirus Aid, Relief, and Economic Security (CARES) Act Trump signed last month.

Mnuchin, who has to sign off on the loan to USPS, confirmed to reporters at the White House that the administration will impose certain criteria, though he declined to share details. Trump, however, jumped in and said, "if they don't raise the price, I'm not signing anything... and I'm not authorizing you to do anything, Steve."

Sen. Bernie Sanders shared the Post's reporting on Twitter and declared that "it is disgusting that Trump would exploit this pandemic" to force changes at USPS.

It is disgusting that Trump would exploit this pandemic to bust postal unions and privatize the most popular govern… https://t.co/vzCRN5JFLM
— Bernie Sanders (@Bernie Sanders) 1587748658.0

Sanders on Tuesday hosted a virtual town hall with the leaders of the nation's top postal unions to discuss how to save USPS.