As countries around the world debate when and how to ease pandemic restrictions, coronavirus infections continue their steady rise in Japan.

Two medical groups have also warned that a “collapse in emergency medicine” has already happened as hospitals are being forced to turn away patients, presaging a possible collapse of the overall health care system.

How did Japan get to this point? The country had initially been held up as having one of the more effective responses to the coronavirus in the early days of the pandemic. Yet, its curve has not even started to flatten like those of its neighbours, South Korea, China, Taiwan and Hong Kong.

The relatively low rate of infections from January to March was credited by some to Japanese societal norms: bowing instead of handshakes and hugs, the use of masks in flu season and generally high standards of personal hygiene.

Japan has long had a reputation for conformity and adherence to rules, so a high level of compliance with public safety directions was expected.

Japan's capricious response to coronavirus could dent its international reputation

However, overconfidence in these practices, and the ongoing lack of firm direction from Prime Minister Shinzo Abe’s government, may have lulled many Japanese into a false sense of security. This has been starkly demonstrated in recent weeks as crowds have flocked to parks to view the cherry blossoms, ignoring requests from local authorities to stay home.

Opinion polls now show at least half of Japanese disapprove of the government’s handling of the crisis and believe Abe’s national emergency declaration came too late. 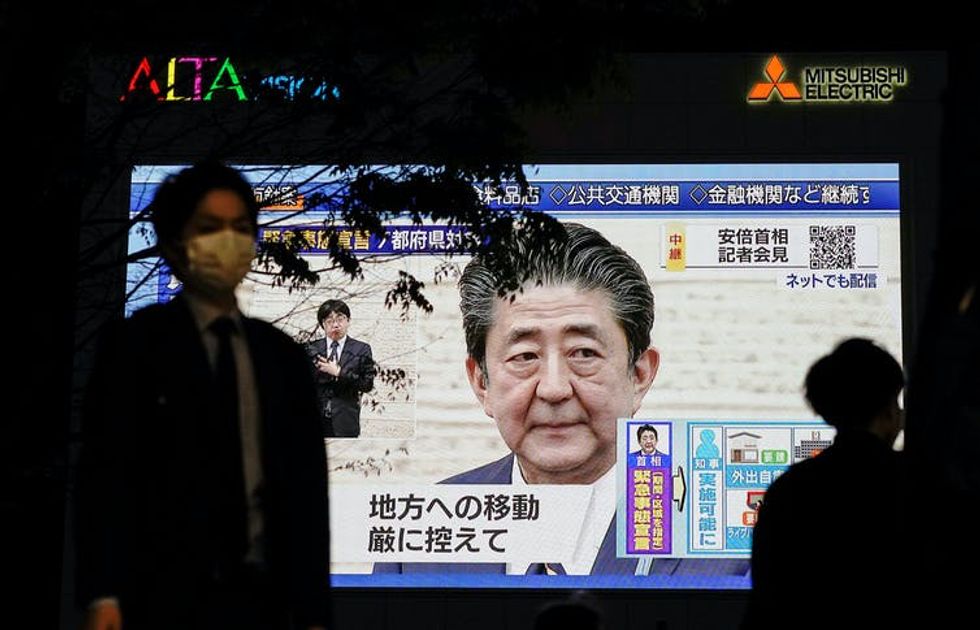 Many Japanese believe Abe’s declaration of a state of emergency came to late.

Erratic decision-making from the start

From the start of the pandemic, Abe’s government has been criticised for being too offhand in its response and erratic in its decision-making.

Japan’s first major misstep occurred in early February, when the Diamond Princess cruise ship was quarantined in Yokohama. At least 23 passengers were allowed to disembark and go home without being tested, and around 90 government employees returned directly to their Tokyo offices after visiting the stricken vessel.

More than 700 cases were eventually linked to the cruise ship, in total.

Weeks later, Abe then ordered schools to remain closed until the end of the spring break in April, a sudden decision that caught both teachers and parents by surprise, leaving them little time to plan and prepare.

Coronavirus in Japan: why is the infection rate relatively low?

Then came the lack of decisiveness on the Tokyo Olympics. Abe reluctantly announced in late March that the games would be postponed in 2020, but only after countries began to pull out and the government was accused of dragging its feet.

Why haven't the Olympics been cancelled from coronavirus? That's the A$20bn question

Abe’s government has also faced criticism over relatively low levels of testing. Over 112,000 tests have been conducted, at a rate of around 7,800 per day in April. But the government’s decision to restrict most tests to highly symptomatic patients means actual cases are likely being under-counted.

At a press conference in mid-April, Abe pledged to rectify shortages of personal protective equipment for medical workers and ramp up testing. As an interim measure, two cloth masks are being mailed to every household, an unpopular gesture widely lampooned on social media as “Abenomasks”.

Even when Abe has tried to send the right message, the tone has been off. This was perhaps best symbolised by the mocking reaction to his well-intentioned “stay home” Twitter post, which portrayed him drinking tea and patting his dog.

Critics said it showed just how out of touch he was with the lives of ordinary Japanese.

As cases began to spike in late March, Tokyo Governor Yuriko Koike held an emergency press conference to urge residents refrain from nonessential outings, such as visits to parks to view cherry blossoms. 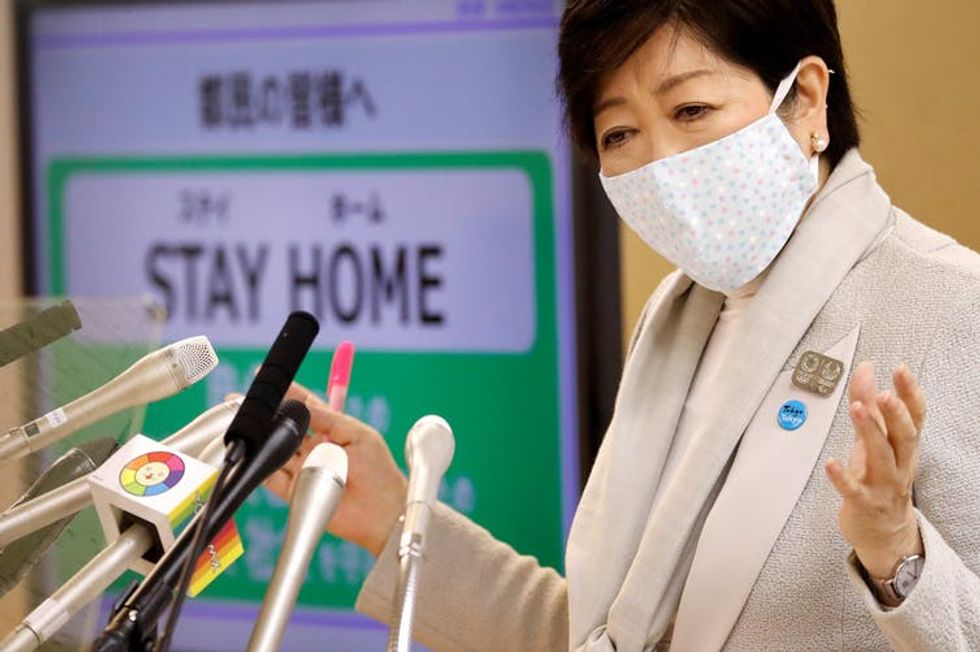 Yuriko Koike has emerged as a trusted voice during the pandemic.

But despite rising concerns from medical authorities, as late as March 31, Abe’s government still denied there was a need for a national state of emergency.

When the state of emergency was finally declared in mid-April, many feared it still wasn’t enough. Under the law, governors can requisition property and medical supplies to use to treat COVID-19 patients, but crucially, police have no enforcement powers to close businesses or restrict the movements of individuals. People and companies can only be asked to voluntarily comply.

The Japanese government could interpret two articles in the constitution to impose a stricter lockdown, as long as appropriate legislation is passed in the Diet, Japan’s parliament.

However, Abe has thus far avoided doing so. He seems to be bowing to pressure from the Keidanren, a major corporate lobby group and donor to his party, out of fear the economy could descend into an even deeper recession than the -5.2% reduction in economic growth projected by the IMF. 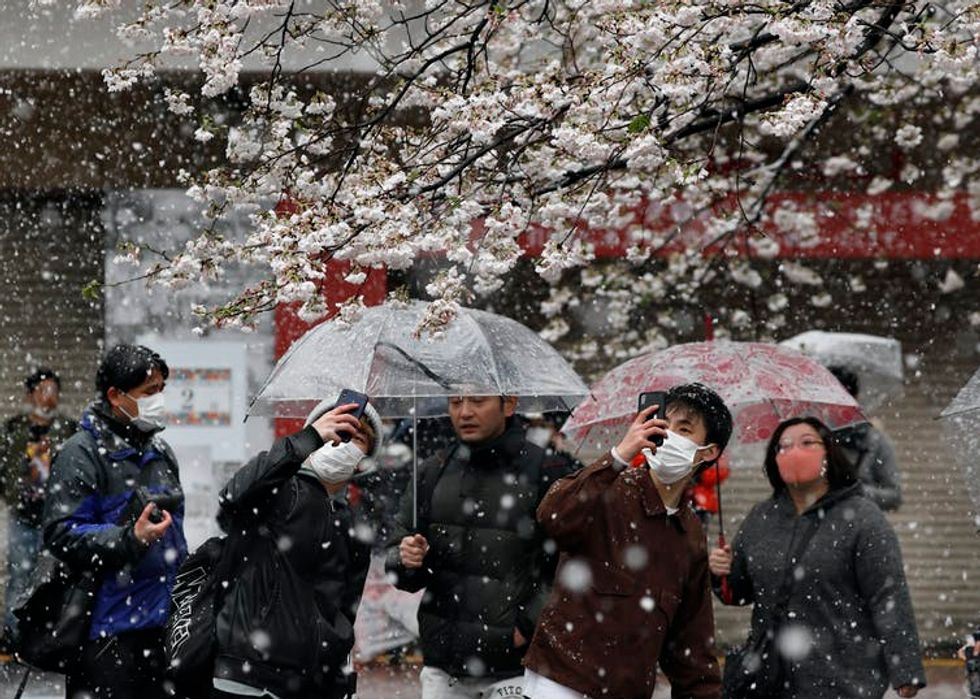 Crowds have flocked to view the cherry blossoms, despite messages to stay home.

Demands have been increasing from health authorities, prefectural governments and opposition parties for Abe to take more forceful action. Revealing his diminishing political authority, he is even being pressed by both senior figures and rank-and-file members within his own Liberal Democratic Party (LDP).

The LDP’s junior coalition partner, the Komeito party, also threatened to break from the ruling coalition. The move forced Abe to extend a planned income support scheme for low-income households into a universal payment of 100,000 yen (nearly A$1,500) to all citizens, as part of the government’s record 117 trillion yen (A$1.7 billion) emergency stimulus spending.

And while Abe has floundered, Koike, his longtime rival, has emerged as a strong leader during the crisis, praised for her clear public communication and decisive action.

Abe’s third consecutive term as LDP president expires in September 2021, around the time national elections are due. Even if Japan recovers by then, his legacy as Japan’s longest-serving prime minister is now surely being tarnished.