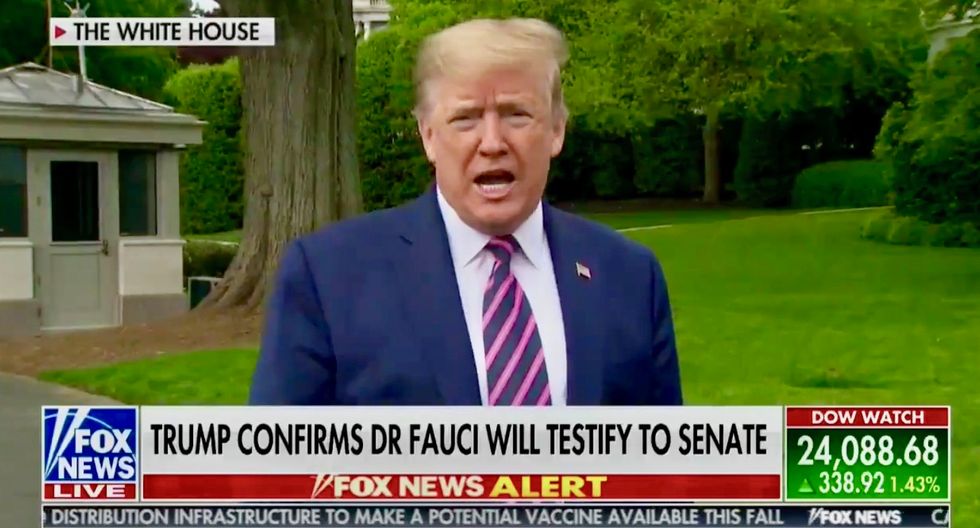 "What is the White House hiding?"

In remarks to reporters outside the White House Tuesday, President Donald Trump claimed he was flouting U.S. House oversight of his administration's response to the ongoing coronavirus pandemic because the Democratic majority is made up of "a bunch of Trump-haters."

Departing for a tour of a Honeywell plant in Arizona, Trump was asked why he won't allow Dr. Anthony Fauci—director of the National Institute of Allergy and Infectious Diseases and a lead member of the White House Coronavirus Task Force—to testify before the House.

"Because the House is a set up. The House is a bunch of Trump-haters... They, frankly, want our situation to be unsuccessful, which means death," Trump said on camera. "It's just a set up. But Dr. Fauci will be testifying in front of the Senate and he looks forward to doing that."

Critics on social media called the president's comments "disgusting" and warned that Trump is "dangerously deranged." Journalist Mehdi Hasan of The Intercept suggested Trump's predecessor could never have gotten away with similar moves while dealing with a GOP-controlled House:

Trump's comments came after the Daily Beast reported Monday that the White House was blocking two other members of his administration's coronavirus task force from testifying to the House:

The House Energy and Commerce Committee had asked the administration for testimony from Alex Azar, the Department of Health and Human Services Secretary, and Seema Verma, the director of the federal Centers for Medicare and Medicaid Services. Two sources, including a Democratic spokesperson for the committee, confirmed to the Daily Beast that their requests were rejected Monday.

Last week, the White House blocked Dr. Anthony Fauci, the administration's foremost infectious disease expert, from testifying before House Democrats, though Fauci still is set to appear before a Senate panel run by Republicans. Trump spokespeople defended the decision by saying it would be "counterproductive" to have officials involved in the Covid-19 response to appear at congressional hearings because they are too lengthy.

The Daily Beast, which updated its report with Trump's remarks Tuesday, noted the president's outlook on blocking top officials from testifying on the federal Covid-19 response "was formalized in a new White House policy that began circulating among officials on Monday. It instructed members of the coronavirus task force that they would not be permitted to testify in Congress without the approval of White House chief of staff Mark Meadows."

House Speaker Nancy Pelosi (D-Calif.)—who hasn't yet set a date for the House to return to Washington, D.C.—addressed that White House policy in an interview Monday, telling CNN's Wolf Blitzer: "Well, I was hoping they would spend more time on the crisis instead of those daily shows that the president put on, but the fact is that we need to allocate resources for this. In order to do that, any appropriations bill must begin in the House, and we have to have the information to act upon."

"So, the fact that they say, 'We are too busy being on TV to come to the Capitol' is, well, business as usual for them. But it is not business that will be helpful to addressing this," she said. "We need to have the information. We must insist on the truth."

"Now, it's interesting, they said, 'We are not going to the House, but Dr. Fauci can go to the Senate,'" Pelosi added. "I guess Mr. Meadows, being until a week or so ago a member of the House of Representatives, knows that we will be business—very, very strictly insisting on the truth, and they might be afraid of truth."

It is absurd and dangerous that members of the White House Coronavirus Taskforce have been muzzled, ordered not to… https://t.co/7rTcdDZbXW
— Barbara Boxer (@Barbara Boxer) 1588697288.0

Senate Majority Mitch McConnell (R-Ky.) on Monday convened the upper chamber for the first time in nearly six weeks, despite concerns that doing so could put lawmakers at greater risk of contracting the virus. Some Republican lawmakers and Trump have fought for easing lockdown restrictions, despite warnings that doing so too soon could exacerbate the public health crisis.

Trump claimed Tuesday that "the whole world is excited, watching us, because we're leading the world." Vox journalist Aaron Rupar pointed out the U.S. death toll from Covid-19 is high compared with other affected countries. According to Johns Hopkins' tracker, more than 70,000 people have died in the United States, by far the most in the world.

The president also dismissed an internal government document reported by the New York Times Monday that by June 1, U.S. Covid-19 deaths could reach 3,000 per day—nearly double the current daily death toll of more than 1,700—and cases could hit about 200,000 per day, compared with the current figure of 25,000.

As Rupar put it: "Trump's response to new models showing that his push to relax social distancing is a bad idea was to lie about them."

Trump lies and says models that show US coronavirus deaths increasing in coming weeks are based on "no mitigation,"… https://t.co/1S1ZIm9hUo
— Aaron Rupar (@Aaron Rupar) 1588690032.0

While Trump pushed back against the models, the data sparked alarm among journalists and human rights advocates. Linking to the Times report, the U.S.-based group Human Rights Watch tweeted Tuesday morning that "the crisis is exposing the deep cracks in America's system."