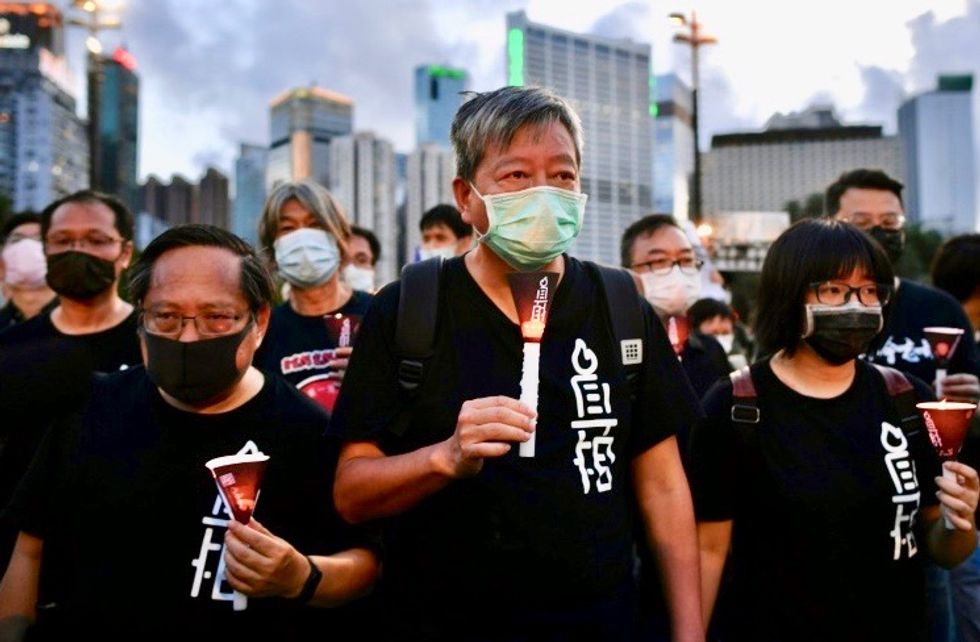 Hong Kong pro-democracy protesters defied a ban against gathering at a park to commemorate Thursday's anniversary of China's deadly Tiananmen crackdown, with tensions seething in the financial hub over a planned new security law.

The semi-autonomous city had for three decades seen huge vigils to remember those killed when China's communist leaders deployed its military into Beijing's Tiananmen Square to crush a student-led movement for democratic reforms.

This year's vigil was banned, with authorities citing coronavirus restrictions on group gatherings.

But pro-democracy campaigners in Hong Kong, who have been waging a long struggle against what they see as China's tightening grip on the city, were determined to make their voices heard.

Hundreds of people, including some prominent democracy leaders, broke through barriers at Victoria Park where the vigil is held each year just as night fell.

"I’ve come here for the vigil for 30 years in memory of the victims of the June 4 crackdown, but this year it is more significant to me," a 74-year-old man who gave his surname as Yip told AFP inside the park.

"Because Hong Kong is experiencing the same kind of repression from the same regime, just like what happened in Beijing."

Some of the people in the park wore black t-shirts with the word "Truth" emblazoned in white. Others shouted pro-democracy slogans including: "Stand with Hong Kong".

Police maintained a presence near the park but did not move to disperse the protesters.

China's communist rulers forbid discussion on the mainland of the Tiananmen crackdown, during which hundreds -- by some estimates more than a thousand -- people were killed.

Hong Kong, which has been allowed liberties unseen on the mainland as part of its 1997 handover agreement with the British, had been the only part of China where such mass displays of remembrance were possible.

Organisers of commemoration events also called for residents to light candles of remembrance at 8pm (1200 GMT) wherever they were. Booths sprung up across the city to hand out candles as commuters made their way home on Thursday evening.

On the campus of Hong Kong University, students spent the afternoon cleaning a memorial to the Tiananmen dead known as "The Pillar of Shame".

Crowds have swelled at Hong Kong's Tiananmen vigils whenever fears have spiked that Beijing is prematurely stamping out the city's own cherished freedoms, an issue that has dominated the finance hub for the past 12 months.

AFP / DALE DE LA REY Students clean the Pillar of Shame, a statue by Danish artist Jens Galschiot to remember the victims of the 1989 Tiananmen crackdown

Opponents, including many Western nations, fear it will bring mainland-style political oppression to a business hub.

But in mainland China, the crackdown is greeted by an information blackout, with censors scrubbing mentions of protests and dissidents often visited by police ahead of June 4.

Police in Beijing prevented an AFP photographer from entering Tiananmen Square to record the regular pre-dawn flag-raising ceremony on Thursday and ordered him to delete some photos.

The candle emoji has been unavailable in recent days on China's Twitter-like Weibo platform.

The United States and Taiwan issued statements calling on China to atone for the deadly crackdown.

"Around the world, there are 365 days in a year. Yet in China, one of those days is purposely forgotten each year," Taiwan's President Tsai Ing-wen tweeted.

Secretary of State Mike Pompeo tweeted a photo of him meeting prominent Tiananmen survivors as US racial justice protests continue.

China's foreign ministry described calls for Beijing to apologise for the crackdown as "complete nonsense".

"The great achievements since the founding of new China over the past 70 or so years fully demonstrates that the developmental path China has chosen is completely correct," spokesman Zhao Lijian told reporters.