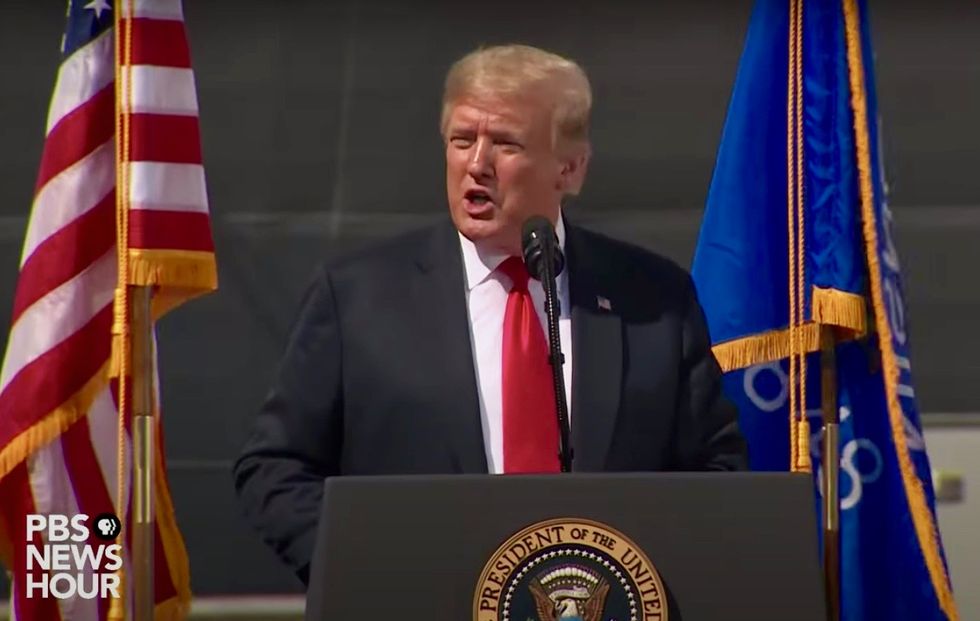 "There is nothing normal about the commander-in-chief publicly admitting that the government contracting process was corrupted by political considerations."

Several shipbuilding companies may have grounds to file formal complaints with the U.S. Navy and the Government Accountability Office after President Donald Trump on Thursday suggested a multi-billion dollar weapons contract was awarded to a Wisconsin company because of its status location in a key 2020 battleground state.

Speaking to workers at Fincantieri Marinette Marine on Thursday, Trump said the company was selected for the $5.5 billion contract to build 10 guided-missile frigates because of the speed and maneuverability of its existing ships—and because of the company's location in a swing state.

"I hear the maneuverability is one of the big factors that you were chosen for the contract," the president said. "The other is your location in Wisconsin, if you want to know the truth."

"Always saying the quiet part out loud and undermining trust in government along the way," Peter W. Singer of the think tank New America tweeted in response.

Fincantieri Marinette Marine was awarded the contract in April, beating out companies in Maine, Mississippi, and Alabama. Maine, which has not supported a Republican for president in more than three decades, is currently expected to go to presumptive Democratic nominee Joe Biden in November, and the solidly-red states of Mississippi and Alabama are expected to vote for Trump.

"There is nothing normal about the commander-in-chief publicly admitting that the government contracting process was corrupted by political considerations."

In Wisconsin, Biden is currently polling 10 points ahead of Trump according to a Marquette Law School survey taken on June 18. Hillary Clinton narrowly lost the battleground state in 2016 by fewer than 23,000 votes.

As Robert Mackey wrote at The Intercept on Thursday, the shipbuilders who were passed over for the contract could feasibly file a protest with the GAO's Procurement Law Division.

"There is nothing normal about the commander-in-chief publicly admitting that the government contracting process was corrupted by political considerations," wrote Mackey.

The three companies who lost out on the contract have 10 days to file a protest from the day they learn that the reasoning for awarding the work to Fincantieri Marinette Marine may have been questionable, according to the GAO.

"That sound you're hearing is every Navy acquisition [public affairs officer] putting their phone on 'do not disturb' and activating their out-of-the-office automated email responses until the protest period ends," wrote Andrew Clevenger, a defense policy reporter at Roll Call.

Jodi Vittori of the anti-corruption watchdog Transparency International added that the U.S. Congress and the inspector general of the Navy could have reason to investigate the contract.

During his appearance in Wisconsin, the president also claimed that 15,000 jobs would be created by the guided-missile frigate project before changing the projected number to 9,000. Both estimates were well over the one put forward by Rep. Mike Gallagher (R-Wisc.) in April, who projected "more than 5,000 direct and indirect jobs" would be created over a 10-year period as a result of the contract.

At The Intercept, Mackey corrected the record regarding Trump's claim during his speech that he had personally intervened in the design of the previously "terrible-looking" frigate, helping to design a "beautiful model."

"It's like a yacht with missiles on it," the president told the workers.

In fact, Mackey wrote, the frigate is based on an Italian warship that was in existence long before the Trump administration awarded the contract to Fincantieri Marinette Marine.