Trump's incendiary language: President has used all 12 kinds of communication that lead to acts of violence 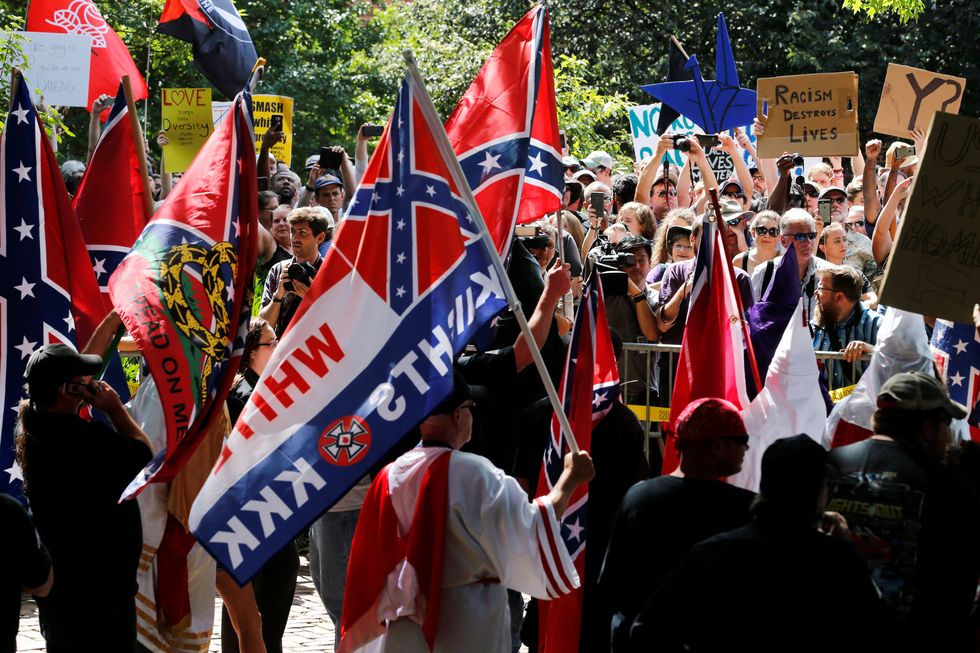 Members of the Ku Klux Klan face counter-protesters as they rally in support of Confederate monuments in Charlottesville, Virginia, U.S. July 8, 2017. REUTERS/Jonathan Ernst

Donald Trump's tweet the week before last that the 75-year old man who was shoved to the ground by police in Buffalo and wound up in the intensive care unit "could be an ANTIFA provocateur" was just one latest example of Trump's use of language to demonize others.

His call a week earlier that "when the looting starts the shooting starts" not merely glorifies violence, as Twitter noted. It predictably creates conditions that lead to violence.

It is all part of a predictable pattern. I am a communication and leadership professor and have spent the last 18 months carefully studying Trump's language in preparing for a forthcoming book. I have documented 12 kinds of communication that have historically preceded acts of violence against groups, critics or rivals — and that have led to civil unrest. Trump uses all 12 forms. These include:

Trump's call for mobilizing the active duty military to respond to civil unrest is an escalation of this third form of language that provokes violence.

The U.S. Holocaust Museum Simon-Skjodt Center for the Prevention of Genocide defines "dangerous speech" as speech that, under the right conditions, can influence people to accept, condone and commit violence against members of a group. Trump's language has that effect.

After Trump began his presidential campaign in 2015 by calling Mexicans rapists, drug dealers and the cause of many American problems including crime, hate crimes against people perceived to be Latino surged.

After he called for a "total and complete ban of Muslims entering the United States," hate crimes against people perceived to be Muslim or Arab surged.

As he persisted, earlier this year, in calling COVID-19 the "China virus," hate crimes against people perceived to be Asian surged.

And as he was allowed to get away with it, Trump escalated his rhetoric. He began, pre-campaign, conditionally: If Barack Obama wasn't born in this country, he could not be president. It moved to the outright declarative: He asserted, falsely, that Rep. Ilhan Omar has praised al-Qaida. In fact, she has denounced them her entire career

A few weeks ago, he escalated further: He retweeted a video of the head of Cowboys for Trump, who happens to be an elected official, saying "The only good Democrat is a dead Democrat."

With his escalation of language, the violence also escalated. During the campaign it took the form mostly of hate crimes.

But all that changed in the run up to the 2018 midterm elections, when it provoked acts and attempted acts of terrorism.

In early October 2018, Trump was using some form of "invader," invasion," "criminal," "animal" or "killer" between eight and 10 times per rally. By late October it had escalated to more than 30 times. These were further amplified by his tweets. His words were then amplified further in the media and social media, and then took off in the white supremacist ecosystem that became an echo chamber.

He said that George Soros was funding the "caravan" that constituted an "invasion" at the border. Within two days, more than 2 million Twitter accounts reaching 275 million people mentioned both Soros and "caravan" together. So did Facebook accounts reaching 99 million.

That same week, in late October 2018, the Tree of Life synagogue shooter committed an act of terror in Pittsburgh, killing 11 people and wounding two. Six days before the shooting he posted, "I have noticed a change in people saying 'illegals' that now say 'invaders.' I like this." He took up the Soros conspiracy, and he named synagogues that he said were funding a refugee agency that was involved in the "invasion." Two hours before the shooting, he posted that this agency "likes to bring invaders that kill our people. I can't sit by and watch my people get slaughtered. Screw the optics. I'm going in."

That same week a Trump supporter sent a mail bomb to Soros' home, and other bombs to a dozen Trump critics. The New Zealand mosque shooter and the El Paso Walmart shooter both invoked Trump and invasions in their manifestos.

So what can engaged citizens, civic leaders, journalists and public officials do?

First, they need to see the pattern and to name it.

Second, they need to name the foreseeable consequences of such language: It creates the very social conditions that can lead people to accept, condone and commit violence against members of a group, a rival or a critic.

Third, they need to unambiguously call on Trump, or any other leader who uses such language, to stop. And to make clear that they hold that leader accountable for the violent consequences of such language.

We saw just this when former Defense Secretary James Mattis, a retired Marine Corps general, finally broke his silence. Speaking of his successor, current Defense Secretary Mark Esper, Mattis said, "We must reject any thinking of our cities as a 'battlespace' that our uniformed military is called upon to 'dominate.'"

Gen. Mattis has shown us the way. Now it's up to the rest of us.