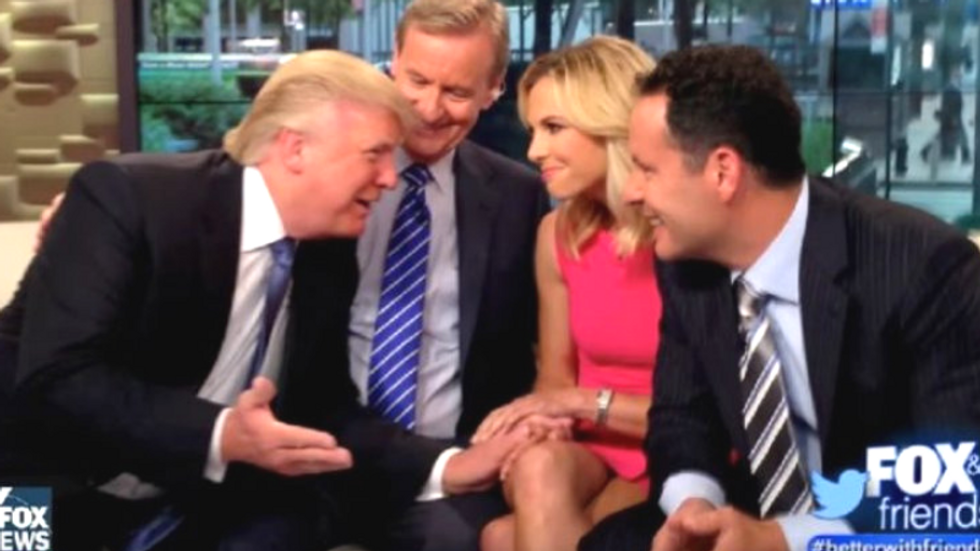 Donald Trump appears on Fox and Friends (Screen cap).
Donald Trump is a Fox News grandpa. He watches the TV and it tells him what to do.

Trump is not special or unique in that regard. As Jen Senko showed in her compelling documentary "The Brainwashing of My Dad," there are tens of millions of mostly older white people who live in the deranged alternate reality created by Fox News (and the broader right-wing echo chamber).

But Donald Trump has a terrible power and titanic responsibilities that the other lost souls in the Fox News Universe do not: He is president of the United States of America. In that way Donald Trump is unique in his ability to follow the horrible commands given to him by Fox News and then inflict them on the American people.

During his one-person White House Rose Garden campaign rally last Tuesday, Donald Trump continued his public downward spiral of mental decompensation as he spouted more lies and conspiracy theories, made vicious attacks on Joe Biden and Rep. Alexandria Ocasio-Cortez, engaged in more self-aggrandizement, undermined the country's public health with his lies about the coronavirus, claimed that Biden and the Democrats want to destroy "the suburbs," and overall behaved as though he was auditioning for the role of Mad King in a made for TV movie.

Writing at The Bulwark, Charles Sykes described the scene:

The president of the United States, ladies and gentlemen, was in full Mad King mode, rambling, confused, disjointed, parading his grievances with barely a wave from afar at coherence. It was as if a hive of buzzwords exploded in his head: statues, boats, vandalism, socialism, suburbs.

It is hard to write about this display without using the word "impaired." Because it wasn't just the disjointed word salad. It was the delivery. Trump was somnolent, as if he'd pulled an all-nighter watching Fox & Friends or maybe his VCR tapes of Shark Week.

The Rose Garden event was ostensibly about China, but quickly disintegrated into something between one of his improvisational stump performances, a stream of broken consciousness, and a rambling oppo dump. Perhaps the president really misses campaign rallies. Or maybe he just got confused.

Someone on his staff gave him a summary of horrible things that he might someday be able to craft into a campaign attack on Joe Biden . . . and so he just stood there and read the whole thing.

Trump did not pull words and ideas out of the ether during his Rose Garden "press conference."

He was reciting talking points from Fox News and other elements of the right-wing disinformation machine.

For those rational people who do not live in that echo chamber, Trump's Rose Garden "press conference" was all conspiratorial madness, lies and assorted right-wing pablum. But for those people who live in the Fox News Universe what Trump said was verifiable fact and a type of special privileged knowledge only available to people like them.

On Wednesday, Trump again showed the power that Fox News has over his mind. Like a broken computer in a movie, spitting out the same information over and over again, Trump declared:

Joe Biden and the Radical Left want to Abolish Police, Abolish ICE, Abolish Bail, Abolish Suburbs, Abolish the 2nd Amendment – and Abolish the American Way of Life. No one will be SAFE in Joe Biden's America!

Donald Trump continues to behave like the equivalent of a drunken, Fox News-addicted bigot at the hotel bar. He is Archie Bunker, with more money and less decency. Unlike his close adviser Stephen Miller, an overt white supremacist, Trump has no political ideology. Fox News, however, does. It is the country's largest and most successful white supremacist propaganda machine, if not the world's. Fox News can make that vile vision become reality through its symbiotic relationship with Donald Trump and his Republican Party.

While Trump's Rose Garden "press conference" was despicable, the president's interview with CBS News on the same day revealed even more how Fox News has provided him with a narrative framework for his racism and white supremacy.

Because he wants to be a 21st-century version of Jefferson Davis, Trump defended the Confederate flag and tried to suggest it was somehow equivalent to the Black Lives Matter movement.

In Trump's mind and the collective mind of the Fox News Universe, Black people who do not want to be treated as second-class citizens in America are the moral equivalent of white supremacist terrorists, murderers, rapists, torturers, enslavers and other evildoers.

The claims Trump has made recently do not require great skill in semiotics and sociolinguistics to decode and rebut.

The Confederate flag is not just a matter of "free speech." It is a symbol of white supremacy and a cause dedicated to enslaving, murdering, abusing, torturing and otherwise denying the human rights of black people. Political scientists have shown that support for the Confederate flag is highly correlated with anti-black animus and racial resentment.

While many white Americans — at least in these weeks of the George Floyd protests — are showing a positive change in their racial attitudes and feelings towards Black Americans and other nonwhites, Donald Trump and his regime have instead chosen fanatical loyalty to their white supremacist counterrevolution against multiracial America.

What are Donald Trump and his followers and allies fighting so desperately to defend?

For a number of whites, these monumental social and political trends — including an erosion of whites' majority status and the election of America's first black president — have signaled a challenge to the absoluteness of whites' dominance. These threats, both real and perceived, have … brought to the fore, for many whites, a sense of commonality, attachment, and solidarity with their racial group. They have led a sizeable proportion of whites to believe that their racial group, and the benefits that group enjoys, are endangered. As a result, this racial solidarity now plays a central role in the way many whites orient themselves to the political and social world.

Fox News is one of the main redoubts for this white supremacist counterrevolution. In that role, Fox News takes explicit white supremacy from fringe voices in American society (and around the world) and repackages it for "mainstream" consumption. This process is known as "narrative laundering." Fox News host Tucker Carlson and his staff are experts at it.

On his prime-time show, Carlson routinely repeats white supremacist talking points about nonwhite "invaders" in America, or about how white people are being "replaced," nonwhite immigrants are disease carriers, "diversity" is dangerous, white supremacy is a "myth" and the Black Lives Matter movement is "coming for" white people, among other lies.

Carlson's head writer was forced to resign last week after his white supremacist threats against Black people, Jews and other ethnic and racial minorities were recently discovered on an online forum. Carlson's head writer also targeted women and gay people with his hatred.

Such comments routinely appear on Carlson's show, to be sure, but laundered to be slightly more "polite." Predictably, last Monday Tucker Carlson announced that he would be taking a "long-scheduled vacation," effective immediately.

In all, America's democracy and political culture are imperiled by both Fox News as well as Donald Trump's relationship to it. When the television talks to Donald Trump it is telling him to do horrible things — and he slavishly follows the commands.

Writing at the Guardian, Bobby Lewis describes how Fox News poisons its viewers, and the United States as a whole:

Fox News is ridiculous, stupid, and — when it doesn't mean to be — hilarious. Most importantly, it's an extremely influential stream of conservative misinformation. And the president's favorite show, Fox & Friends, encapsulates the totality of the rotten network's inherent conflicts and contradictions.

It shows how news and opinion is blurred — but opinion wins — and the lengths the network goes to ensure a devoted audience. Fox is a shameless counterfeit of a news organization, and Fox & Friends leads the fraud bright and early every morning.

People who begin watching Fox News "with an open mind," Lewis continues, "can find themselves sucked into a destructive and alienating lifestyle." He details the examples collected by the writer Luke O'Neil, "of families, his own included, divided by Fox News' partisan garbage fire." One family spoke of no longer sending their children to see their grandparents because "their toxic anger and resentment is slowly becoming their entire identity."

I can tell you from personal experience that when I say Fox poisons minds, I'm not being that hyperbolic. While watching Fox & Friends every morning, I struggle to unearth or at least assemble even shadows of fact-based arguments from the unhinged nonsense that is vital to the brand.

It can be so intense on Fox & Friends that I sometimes have what could be called propaganda hangovers – after finishing the show, I feel as though I'm trapped in a fog of disinformation, and my mental processes feel sluggish for a few more minutes.

As he has repeatedly demonstrated to America and the world, Donald Trump, the corner bar drunk and Archie Bunker bigot, is a prisoner of the Fox News worldview. This would almost be comical if Trump were not president of the United States in a time of plague and economic disaster, for which he is largely responsible. Families of those who have died or been rendered destitute are not laughing. America is now a pitiful nation led by a pathetic Mad King who will apparently do anything to stay in power.