Here's what the Jerry Falwell Jr. sex scandal tells us about evangelicals and gender roles 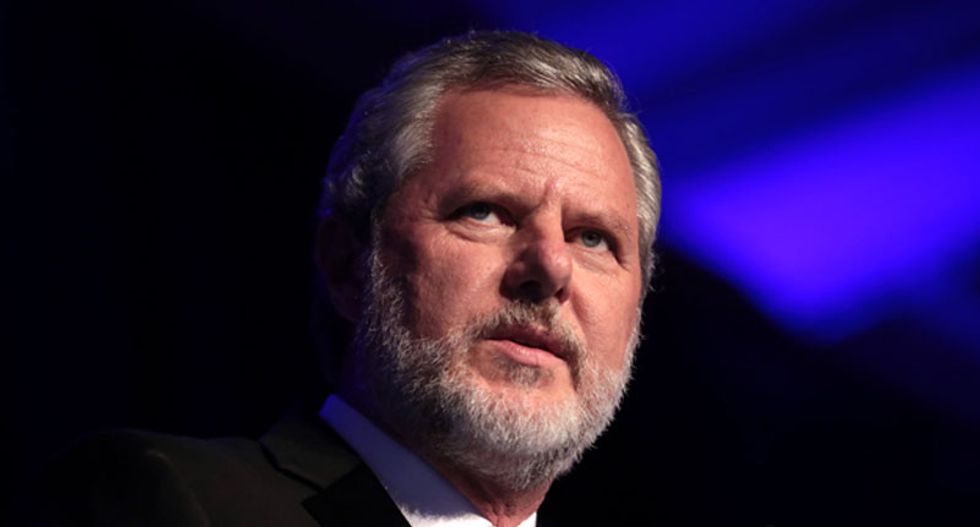 Jerry Falwell Jr. may well be wishing that a photo with his underwear showing and his arm around the waist of a woman not his wife was the worst of his problems.

That snapshot kick-started a round of speculation into the prominent evangelical leader’s personal life that has cost him his job. On Aug. 25, Falwell confirmed that he has resigned his presidency at Liberty University.

His resignation comes after allegations in multiple news outlets that Falwell and his wife, Becki, were both engaged in a seven-year sexual relationship with a young man named Giancarlo Granda.

Granda told Reuters that the sexual relationship involved both Falwells. He claims he had sex with Becki while Jerry Falwell watched from the corner of the room. Jerry Falwell Jr. disputes the allegations. In a statement to the Washington Examiner, Falwell said: “Becki had an inappropriate personal relationship with this person, something in which I was not involved.”

In other words, it’s Becki’s fault.

From my vantage point as a scholar who studies religion and gender, this comment from Falwell is revealing.

How male public figures react to a sex scandal can be a very complex process. In trying to preserve what is left of their reputations, my research indicates that they will often attempt to prove that they remain a “real man” – both a loving, devoted husband and a strong, virile leader. This behavior makes sense when one understands the conservative Christian gender roles that inspire them.

Under conservative Christian gender norms, men are described not only as naturally sexual, but also as divinely designed to be far more sexual than women. In fact, male sexuality is often depicted as out of control. The point of marriage, many evangelicals claim, is to harness that male sexuality so that it is productive rather than wild and unbounded.

This view of marriage may strike many as archaic, but these ideas nevertheless permeate part of American culture – one can see it in the “boys will be boys” defense of bad male behavior.

Such ideas also strongly influence how large swaths of the public tend to view sex scandals. Generally speaking, while the public holds the offending politician responsible, they are also often eager to condemn other figures who were involved for leading him astray.

More specifically, my research shows that women who are in any way associated with sex scandals are much more likely to be demonized or blamed for the sexual incident in question. Even when they are the innocent party, they can be portrayed as power-hungry strategists who stayed in a bad marriage to elevate themselves or enablers who give all women a bad name by sticking up for another adulterer.

And as scholar Amy DeRogatis has shown, if a woman is sexual outside of marriage, she is often described by evangelicals as compromising the “gift” of her sexuality intended for her husband. Giving her sexuality to someone else sacrifices her future capacity for intimacy, it is argued.

At the same time, some evangelicals claim that a wide number of marital problems stem from the fact that women do not provide their husbands with enough sex.

In this particular subculture, everything from men’s self-esteem to their job performance can be linked to the frequency and quality of their sexual encounters. In this way of thinking, when men have problems, their wives’ sexual attitudes and behaviors are often to blame.

Negative stereotypes often extend to all women involved in a sex scandal, no matter whether any sexual contact actually happened nor whether the act in question was consensual.

For instance, Paula Jones and Anita Hill both claimed to have been the victims of sexual harassment, at the hands of Bill Clinton and Clarence Thomas, respectively.

In the case of both women, elaborate sexual stories were concocted by critics of all political stripes. These stories were then adopted more broadly by the general public to portray them as immoral women who must have been at least partially responsible for the sexualized encounters they experienced with two prominent figures.

The case of Paula Broadwell is also instructive. Broadwell was the lover of Gen. David Petraeus, one-time director of the CIA. While both Broadwell and Petraeus admitted to a consensual affair while married to other people, Broadwell’s ethics were called into question in a way that Petraeus did not experience.

In short, there is a pattern in American culture of finding fault with the woman in a sex scandal. Falwell’s response falls in line with this pattern.

But there is another aspect of Granda’s allegations that deserves attention when looking at the response to the scandal. In Granda’s telling – again, which has been denied by Jerry Falwell – the evangelical leader watched the sexual encounters between Granda and Becki but did not actively participate.

As scholar Joshua Gamson has shown, men whose sexual violations do not involve actual intercourse – for example sexting, as in the case with disgraced New York politician Anthony Weiner – are often portrayed as less masculine, even silly, for failing to “do the deed.”

What we are watching play out before us with the Falwells is a study of conservative gender norms.

If Falwell can convincingly argue that the fault lies entirely with his wife, then this well-worn story might give him the chance to redeem himself at some point in the future. After all, in this version of events, he can maintain the appearance of a loving husband and father who has some integrity.

On the other hand, being the man who “watched from the corner of the room” fulfills neither the devoted family man role nor that of the virile, powerful husband. If this is the narrative that is ultimately adopted, then the path back to redemption in the eyes of the evangelical public is harder to imagine.

By Leslie Dorrough Smith, Associate Professor of Religious Studies and Director of the Women's and Gender Studies Program, Avila University