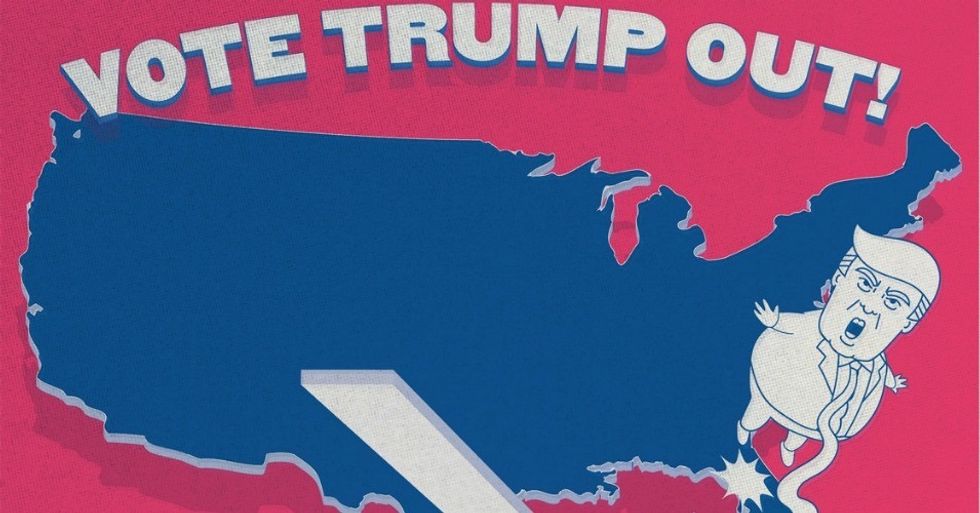 "As progressives and leftists, we are not going to minimize our disagreements with Joe Biden. But we're also clear-eyed about where things stand. We have a moral responsibility to defeat Trump."

With the goal of boosting progressive voter turnout in swing states that could play a decisive role in November, advocacy group RootsAction.org on Wednesday launched a grassroots campaign aiming to prevent another disastrous four years of President Donald Trump's "war on truth, on decency, on our planet, and on working people."

Organizers of the new "Vote Trump Out" initiative argue that while progressives have major substantive differences with Joe Biden on a number of key issues, "supporting the Democratic nominee in swing states is the only means we have to defeat Trump."

"I live in the swing state of Arizona, and I'd vote for a lamp post to get Trump out."

"As progressives and leftists, we are not going to minimize our disagreements with Joe Biden. But we're also clear-eyed about where things stand," campaign's mission statement reads. "We have a moral responsibility to defeat Trump."

"If Biden wins, we'll be at his door on day one, demanding the kinds of structural reforms that advance racial, economic, and environmental justice," the statement continues. "But before that, it's clear what we have to do: This November, we have to #VoteTrumpOut in swing states."

Jeff Cohen and Norman Solomon, co-founders of RootAction—which backed Sen. Bernie Sanders (I-Vt.) in the 2020 Democratic presidential primary—said in a statement that "the general election is far less about Biden than it is about Trump—the most dangerous president in modern U.S. history, who opposes virtually every policy and principle that progressives are fighting for." 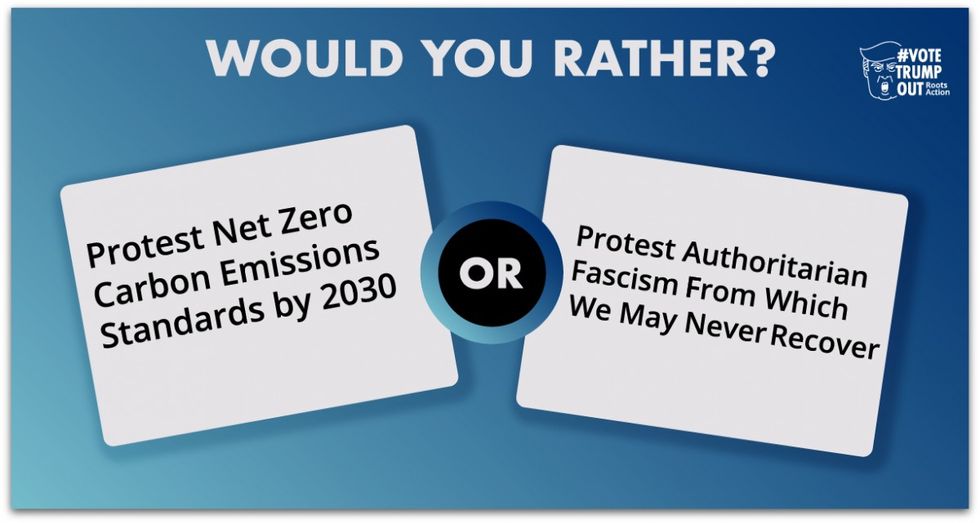 Solomon told Politico that RootsAction has also hired full-time organizers in Arizona, Michigan, and Wisconsin to assist the campaign with Election Day less than three months away.

"I live in the swing state of Arizona, and I'd vote for a lamp post to get Trump out," said Chomsky, who is featured in the initiative's launch video.

"Another four years of Trump may literally lead us to the stage where the survival of organized human society is deeply imperiled," Chomsky says in the clip. "It doesn't matter how I feel. It doesn't matter whether you like Biden or not. That's your personal feelings, irrelevant, nobody cares about that. What they care about is what happens to the world. We have to get rid of Trump, keep pressure on Biden, just as Sanders and associates have been doing."

The Vote Trump Out website includes a Frequently Asked Questions section countering potential left-leaning arguments against voting for Biden, from objections to voting for the "lesser of two evils" to the claim that "there's no real difference between Joe Biden and Donald Trump."

"If Biden wins, we'll be at his door on day one, demanding the kinds of structural reforms that advance racial, economic, and environmental justice. But before that, it's clear what we have to do: This November, we have to #VoteTrumpOut."

"We strongly disagree," the initiative says in response to the latter argument. "For every undocumented family seeking asylum, for every woman seeking access to reproductive healthcare, for every young person fighting to avert climate catastrophe, for every parent afraid of gun violence at their children's school, for every working class family hoping for some relief from the medical and economic fallout of the coronavirus, life will be very different under a Biden presidency than under four more years of Trump."

On the question of whether a vote for Biden is a vote against progressive values, the campaign is similarly unequivocal.

"It is clear that for poor and working class people, for people of color, for LGBTQIA+ people, for immigrants, for refugees, for students, and for people with disabilities, life will be far harder under a Trump administration than a Biden administration," the website reads. "Voting for Biden in swing states in order to defeat Trump is a reflection, not a contravention, of our values."

In a statement to Common Dreams, Cohen described the new grassroots initative as a "two-step campaign: First, vote Trump out. Then challenge Biden from day one."

"It's easier to persuade 'swing voters on the left' who live in swing states to vote for Biden despite their hesitancy if they know we're serious about step two," said Cohen. "And people who trust RootsAction or our campaign's national endorsers know we're damn serious."