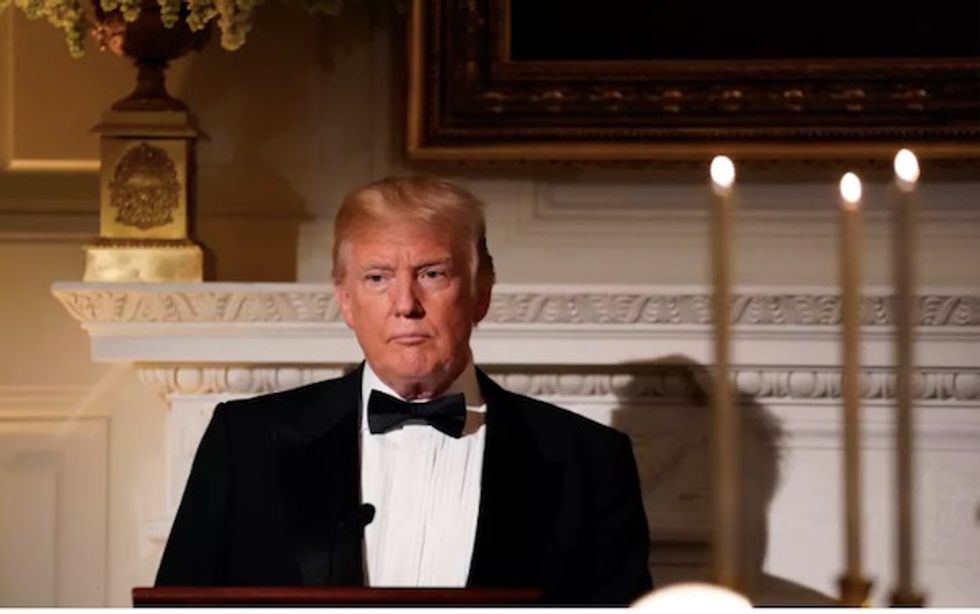 Despite French president Emmanuel Macron’s best efforts on his April state visit, Trump has decided to withdraw the US from the Iran nuclear deal. The decision upends current US foreign policy. REUTERS/Carlos Barria

As election 2020 draws ever closer, the flawed, easily gamed nature of the American quasi-democracy becomes increasingly visible, thanks, of course to Donald Trump, our Fluhrer wannabe, who sees no need to hide his contempt for any result in November other than his own victory.

Election theft could well be looming, in a number of ways, and it’s crucial to look at them. But first, I feel the need to point out that the theft is already well underway. Indeed, Part 1 is already finished. Have you noticed? There’s no candidate with a progressive vision in the race, even though public demand for such a candidate — Bernie Sanders, maybe someone else — has been swelling.

But once again, thanks to the centrist, corporate-owned Democratic Party and their paid media bouncers, this year’s election pits a well-financed, pro-war, don’t-rock-the-boat centrist (a.k.a., a wimp) against a pro-war, well-financed, right-wing extremist, who this year also happens to be a be a racist sociopath. Once again, voters who want something more — eco-sanity, an end to police violence, the elimination of poverty, a slashing of the bloated defense budget — have no actual candidate, just “the lesser evil,” who if elected will make sure any change is minimal.

This is the reluctant democracy bequeathed us by our slave-owning founders, who created an illusory, idealism-haunted democracy. Should a wave of idealism prevail among the public with too much enormity, they added the Electoral College to the mix, which would protect the state against . . . you know, the popular vote. Somehow it didn’t protect the state against Trump.

Which brings us to Election Theft Part 2. As Harvey Wasserman points out, if voting were as revered as we pretend that it is — which is to say, revered for all people, whatever their skin color, ancestry, age or gender — first of all: “Election Day should be a local, state and national holiday, and the voting centers should be kept open from the Saturday prior to Nov. 3 Election Day or even longer if possible.”

The fact that Election Day is not a national day off — after all, it has far more significance than, say, the Fourth of July — is one sign that this is, at best, a reluctant, cautious, cringing democracy.

Beyond that overlooked detail, we have America’s long, long history of voter suppression: Only white. male property owners get to vote. Black people, i.e., slaves, count as three-fifths of a human. Women voting? Give me a break. Over the course of two hundred years, the idealistic public toppled these decrees of the ruling class, but because democracy remains such an inconvenience to those in power, they have continued to find ways to minimize (i.e., steal) the national vote. Election Theft Part 2 is now underway and essentially in the hands of the Republican Party.

“Trump and his Republican enablers are putting voter suppression front and center — fear-mongering about voting by mail, escalating their Election Day poll watching and so-called ballot-security operations, and blocking funding to prepare the country for a pandemic-era election,” Andy Kroll writes at Rolling Stone.

Wasserman puts it this way: “To stop Donald Trump from becoming President for Life, democracy activists must win this fall’s election protection ‘trifecta’ — restore the voter registration rolls, make it possible for everyone to vote by mail and guarantee a fair and accurate ballot count.”

A big part of the Election Theft game is finding ways to kick problematic (likely non-Republican) voters off the voting rolls. This used to be done by such techniques as selective literacy tests (“spell Albuquerque”) and other straight-forward Jim Crow actions meant to intimidate people. Convoluted voter ID requirements are currently popular.

Greg Palast, noting the mysterious drop in voting in certain areas of Wisconsin in the 2016 election, points out:

“They didn’t need to drag the local lakes to find the missing students and Black voters. They were disappeared in plain sight by the Republican legislature under laws crafted by Wisconsin’s radical-right governor, Scott Walker.

“One new law required a government photo ID to vote. But the photo ID issued by the state to its 182,000 University of Wisconsin students did not qualify them for voting nor for registration.

“How brilliant is that? Gun permits could be used to vote; but not student ID. Carry a weapon, good. Carry a book, forget it.”

And now mail-in voting — a crucial part of the 2020 election thanks to the pandemic — is up for grabs, as Palast points out, noting that during the primary election this year, approximately one in ten voters who requested a mail-in ballot either didn’t receive the ballot or got it too late to submit it in time to be counted. And just when the U.S. Postal Service is desperately needed to deliver ballots, the Trump administration, according to Slate, is “sabotaging” it with pernicious cost-cutting.

And if these efforts are not sufficient to do the job in November, well . . . “It’s possible,” Kroll writes, “that voter suppression isn’t the only goal—it’s also about creating chaos and confusion before, on, and after Election Day. Perhaps Trump’s assault on voting in our pandemic election year isn’t a ‘strategy’ at all but rather a kamikaze mission aimed at the heart of American democracy.”

Combine this with some other Trump actions, from reopening the country too quickly and guaranteeing the spread of Covid-19 to sending federal troops to American cities to “fight terrorism,” and what do we have?

“Could this be part of a deranged strategy to sow so much chaos in the country that he will then be able to make a case that elections can’t be held, or that if they are, they’re illegitimate?” asks Ted Glick. “Could he have in his warped and sick mind a plan for what can only be called a coup? Is there any possibility that he could succeed?”

This is America’s reluctant democracy. It demands a lot more of us than we’re taught to believe. Yes, voting is important (if you can), but claiming the right to vote and have your vote counted — and being able to vote for more than simply the lesser evil and the maintenance of the status quo—requires continual struggle in the face of lies and teargas.

Robert Koehler is an award-winning, Chicago-based journalist and nationally syndicated writer. His new book, Courage Grows Strong at the Wound is now available. Contact him at koehlercw@gmail.com or visit his website at commonwonders.com.