COVID-19 a 'catalyst' for QAnon's rise in Europe 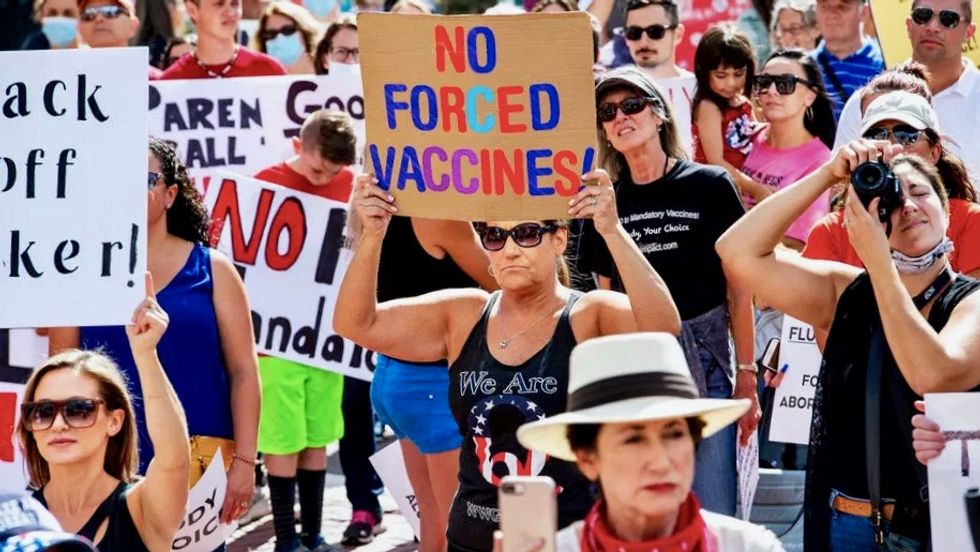 QAnon, the US-based conspiracy about a Satan-worshipping, paedophile cabal secretly running the world, is taking root in Europe feeding on fears stirred up by the coronavirus outbreak, analysts say.

Anti-vaxxers, white supremacists and government sceptics in Europe are starting to buy into the ill-defined but pro-Donald Trump conspiracy that emerged across the Atlantic in 2017.

Dozens of European QAnon offshoots have sprung up online, while protesters have brandished Q-themed messages at demonstrations in Berlin, London and Paris denouncing face masks and other measures to curb the pandemic.

"While the conspiracy's growth in the US has been an outward and visible process, what has gone less noticed is QAnon's extensive root growth and spread in Europe," fake news monitor NewsGuard warned in a report in July. It identified the Covid-19 crisis as a "catalyst".

QAnon posits that an anonymous, high-level government insider codenamed Q is working to expose an anti-Trump cabal that runs Satanic, international child-trafficking ring and is seeking to impose a "new world order".

"We are witnessing the adaptation of these theories into EU-centered -- or even local -- narratives, where they merge with pre-existing conspiracies and groups," the NewsGuard report said.

In Europe, QAnon is spreading "the idea that the pandemic is part of a plan imposed by world elites -- with Bill Gates at the top -- to vaccinate most of the world's population," the NewsGuard report found.

Some have also advanced the idea that social distancing, imposed to curb the virus's spread, was created by the CIA as a torture technique.

Miro Dittrich, a German researcher who monitors online extremism, said it is not unusual for conspiracies to flourish in times of crisis. When people feel they have no control, they seek to blame an adversary.

"As after September 11, which inspired many conspiracy theories, I fear we are witnessing the same phenomenon with the pandemic," Dittrich told AFP.

"The number of followers is increasing dramatically and many are newcomers," he added.

"Confinement has played a role, with people being isolated from their social environment and spending a lot of time online."

Facebook, Twitter and Instagram have banned thousands of QAnon accounts, but followers are now turning to confidential online forums -- sites widely considered to peddle misinformation -- and local, rather than global, conspiracy groups.

They take on European issues such as migration, the coronavirus-fueled economic crash or the perceived loss of personal liberties.

Some list France's Emmanuel Macron and Angela Merkel of Germany as "pawns" of the covert global cabal. They suggest Britain's Boris Johnson was installed by Q to help Trump fight the "deep state."

A French YouTube channel, les DeQodeurs, went from 21,500 subscribers to 68,500 during the month of August, Labbe said.

The biggest German QAnon account, a YouTube channel called Qlobal-Change, has more than 100,000 subscribers and its videos boast some 17 million views.

"QAnon is a conspiracy theory sponge," said Tristan Mendes France, who teaches digital culture at the University of Paris.

"Anything goes, from anti-Semitism to 5G and face masks, via the route of science fiction.

"Its capacity to give all of these theories a home is phenomenal.

"The strength of the fantasy is that it is based on paedocriminality," he added. "If you question their fight, you support pedophilia."

Some celebrities have helped give the conspiracy wings, such as the German vegan cookbook author Attila Hildman, who participated in anti-mask protests in Berlin this month.

British singer Robbie Williams suggested in June that there might be truth to the debunked "Pizzagate" conspiracy that sought to link Hillary Clinton to a child sex ring.

Analysts are particularly concerned about QAnon's rapport with the far right. In Germany, it has got a footing among backers of the nationalist theory of a "great replacement" being orchestrated to supplant Europe's white population with outsiders.

For Dittrich, the cross-over is "logical" because the groups share core beliefs.

"There are weak but worrying signals" of trouble to come, said Andrea Palladino, a journalist at the Italian daily l'Espresso, who follows QAnon accounts, some of which have issued calls to arms.