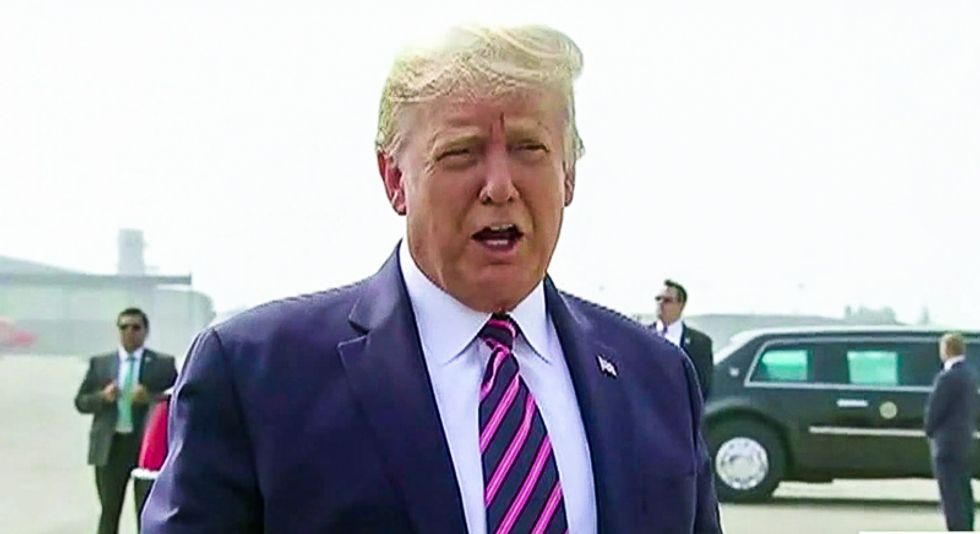 Are they stupid or evil?

When I first started writing about politics, way back in the George W. Bush era, this was a legitimate question when it came to trying to understand the mindset of Republicans, especially when it came to their stubborn refusal to accept scientific truths. Republicans have denied or cast doubt on science in so many ways — denying that condoms are effective, that evolution is real, that climate change is actually happening and largely caused by human activity — and many liberals and progressives have felt legitimately confused about exactly why.

Was it that right-wingers were too ignorant or benighted to accede to scientific realities? Or was it more sinister than that: They knew full well what the science said, but were too selfish and cruel to care, and also selfish and cruel enough to lie about it to our faces?

Well, with the West Coast on fire, a pandemic spreading across the land, and a pathological liar in the White House as the Republican standard-bearer, I think we can consider that debate settled: It's not ignorance. It's malice.

The cruelty, as Adam Serwer of The Atlantic famously wrote, is the point.

Donald Trump is a profoundly stupid man — so stupid that he appears to have actually believed it was a stroke of genius to suggest injecting household cleaners into people's lungs — but even he, as we now know for certain, was only pretending not to understand that the coronavirus is deadly and easily transmitted. Famed journalist Bob Woodward has been steadily releasing audio clips from the interviews he conducted with Trump over the spring for his new book, "Rage." These recordings make clear that Trump knowingly lied about the scale and danger of the pandemic. In one, he tells Woodward, "I wanted to always play it down" and "I still like playing it down".

New tapes released on Monday indicate that, even as Trump was publicly claiming that the virus "would soon be in full retreat" and encouraging protests against lockdown measures, he was privately admitting that "this thing is a killer" and that the virus "rips you apart" if "you're the wrong person."

In other words, Trump gets it but simply doesn't care. That was confirmed again on Monday by a reporter for the Las Vegas Review-Journal, who confronted Trump about his decision to hold a packed (and largely mask-free) indoor rally in Henderson, Nevada, despite warnings from public health officials that such events easily spread the coronavirus.

"I'm on a stage and it's very far away," Trump told the reporter. "And so I'm not at all concerned."

So the safety of the thousands of people who showed up to show fealty to Trump is clearly of no importance. He was far away from them! So he's "not at all concerned."

Trump's odious attitudes towards the people who are being harmed by his failure to take science seriously were on display later in his trip, when he visited McClellan Park in Sacramento, California, where the skies are clogged from smoke from wildfires tearing up the West Coast.

That the frequency and severity of wildfires around the world — and currently up and down the Pacific Coast at a level never seen in human memory — is a result of climate change is beyond dispute. But when a California state official asked him about the issue, Trump simply responded, "It will start getting cooler. You just watch."

"I don't think science knows," Trump insisted, while trying to pretend the problem on the West Coast is about forest management, instead of soaring summer temperatures that turn bone-dry wooded areas into kindling. (It was just nine months ago that similar summer fires in Australia reportedly killed more than a billion animals.)

Claiming that the science is still unclear or that the continued existence of winter proves that there's no climate crisis are standard issue deflections from Republicans. It worked for many years, however, because the consequences of climate change weren't readily apparent to most people, and many people didn't grasp that snow in December doesn't negate the problems caused by record hot summers. (In fact, one aspect of the climate crisis is more extreme weather in all directions: Record heat, epic hurricanes and sometimes powerful blizzards.)

But the "I don't see the problem here" act is a lot harder to pull off when you literally have to walk through a cloud of smoke to get to the microphone where you deny the problem.

The term "gaslighting" —when someone pretends not to know something that both they and their target know is true — has been around in psychology for a long time and recently made the leap to politics, since it so perfectly describes the nature of Trump's obvious lies.

That's also what Republicans have been doing all along when it comes to denying science. Even the duller specimens within the party tend to be a little sharper than Trump, after all. So if he understands the facts and is just pretending not to, it's safe to assume the same thing about the vast majority of Republicans whose lead he follows, and who are perhaps a bit more skillful at performing ignorance.

They aren't ignorant. They don't really believe the science is controversial. That's just an act to cover for a sadistic agenda.

This was always obvious to people who were watching closely. I spent years reporting on reproductive health care, and it soon became evident that no amount of common sense or scientific evidence would overcome the insistence by many conservatives — such as Vice President Mike Pence — that condoms don't work to prevent HIV transmission and other sexually-transmitted diseases. That wasn't, as some headline writers seemed to believe, because Pence was too dumb to understand the science.

Pence is not the brightest bulb on the tree, but it doesn't exactly take a doctorate in molecular biology to see how a condom prevents virus from moving from one body to another.  He was just feigning ignorance to justify his hostility to policies that protect the health of people he hates, especially LGBTQ people and women who have sex lives outside of heterosexual marriage.

It was comforting to believe that incomprehension was the main reason why conservatives resist scientific information on everything from STI transmission to the climate crisis to evolutionary biology. For one thing, that problem would seem to have a ready solution: Better education and reasoned discourse. So well-meaning defenders of science would hold "debates" with climate skeptics or evolution deniers, hoping that superior evidence and eloquent arguments would cause conservatives to see the light and embrace rational policies that are better for the planet and its people.

Nah. Conservatives were just lying about this stuff the whole time. We know this, because they've rallied around Trump, a man who tells so many obvious lies that he clearly doesn't care that everyone knows that he's lying. In fact, that's why he tells laughably obvious lies. It's a power play — a demonstration that he can do or say whatever he wants, no matter how outrageous or offensive, and no one has the ability to stop him.

This distinction matters, because it puts the fight over these issues squarely in the realm of a moral debate, instead of a debate about facts or science. And that's a debate conservatives don't want to have, because they know they'll always lose a moral debate over, say, whether it's OK to let the entire West Coast burn every summer and fall. The gaslighting and feigned ignorance was a tactic to keep the discussion mired in a pointless debate over facts that are abundantly clear, and to avoid these larger moral questions.

Maybe now, with Trump giving the game away, we can stop letting the right waste our time with gaslight-fueled "debates" and turn to what really matters: Will our nation do the right thing, or will we continue to let a pack of bigots and sadists determine our national priorities? That fateful decision is long overdue, but with Trump in the White House trying to lie and cheat his way into a second term, we can no longer avoid it.