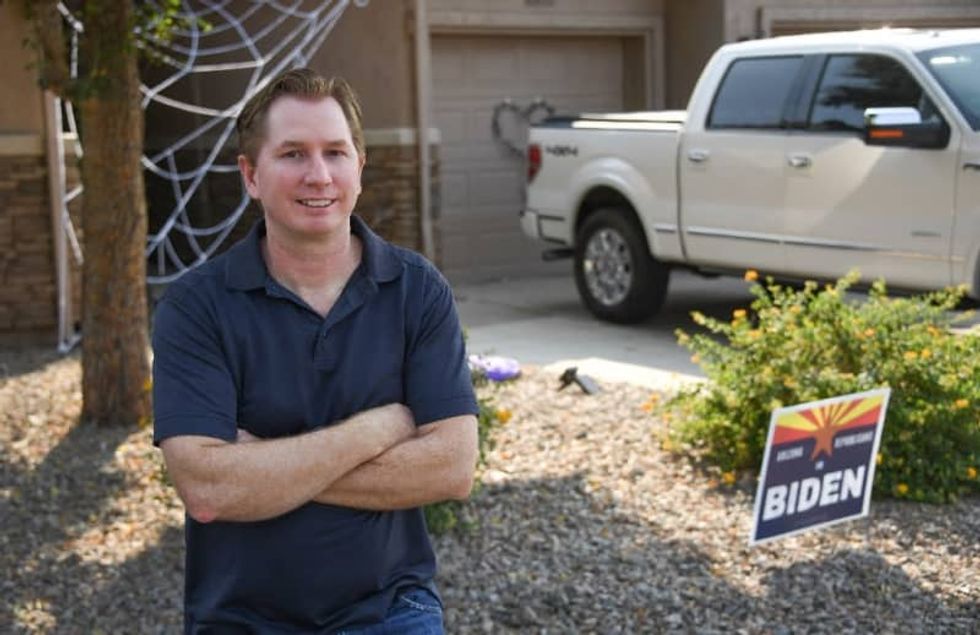 Josh Heaton "immediately" regretted voting for Donald Trump in 2016. The lifelong Republican intends to make amends by supporting Joe Biden next month in the battleground state of Arizona.

Moderate conservatives like Heaton who are switching sides in the southwestern state -- where Trump won by some 100,000 votes last time, but Biden now leads by a slender margin -- could prove vital to the US election, analysts say.

"We didn't feel like we had very good options" in 2016, the 43-year-old engineer told AFP at his home in the Phoenix suburbs.

"To be honest, until I voted I didn't know who I was going to vote for. And I had some regrets immediately afterwards," he added.

Heaton, who defines himself as "a values person, a religious person, a conservative person," had hoped that Trump would "become more presidential" upon winning.

"But that wasn't the case," added Heaton, who criticizes Trump's handling of the pandemic, his free-spending fiscal policy and above all his "narcissism" and "perpetual lying."

Arizona has not elected a Democrat since Bill Clinton's second win in 1996, but is undergoing major demographic changes.

The state best known abroad for the Grand Canyon is seeing a rapid growth in urban areas, among young college-educated voters, and in its robust Latino community -- groups that tend to favor the Democratic Party.

But key to next month's election is that the average Arizona voter, whether Republican or Democrat, tends to be more moderate and is "tired of the President's behavior and the rhetoric coming from his campaign," according to Arizona State University politics lecturer Gina Woodall.

Both campaigns have invested huge sums campaigning in the swing state, with Trump visiting Monday for his second rally of the month so far.

"I think President Trump has a lot more to lose" in Arizona, said Woodall.

"If they lose Arizona, that just makes it that much more difficult... to get the 270" electoral college votes required for the presidency, she added.

Like in many states, voters began casting their choices weeks before November 3, the official election date.

While some have used mail-in voting -- a method which has been repeatedly attacked by Trump's campaign -- many have chosen to cast their early votes in person at polling booths already open.

"Many of my friends are Republicans, and several of them have confided in me that... they're changing their vote" for this election, she said.

"Some of them are afraid to say it out loud," McGovern added.

Until recently Heaton also kept quiet, initially assuming that repentant former Trump voters like him were in the minority.

"I was shocked to learn that there was more of us, because we were kind of in the silent... I don't know... we might even be a majority."

Now on the front of his house, alongside Halloween decorations, are two banners reading "Unity over Division" and "Arizona Republicans for Biden."

The latter is a group for which Heaton and his wife Emily campaign on the sidewalks of major roads.

Passing cars and pickup trucks honk both in support and rejection, with Trump supporters frequently booing and brandishing their own banners or campaign flags alongside US national flags.

Arizona has more registered Republicans than Democrats, and its independents traditionally tend to vote red.

But the local Biden campaign is "more effectively targeting its messages to align with the moderate voters of the state," said University of Arizona associate professor of politics Samara Klar.

For Woodall, Arizona's election will come down to "a referendum on the president, on his behavior, on his policies" -- particularly concerning the pandemic, which hit the state hard this summer.

Heaton condemns the Trump movement as a "cult of lacking empathy" and sees Biden as a "more central" Democratic candidate who "would be a fine president."

He hopes to vote Republican again one day -- but doesn't know when.

For now, he only hopes that a "big win for the Democrats" will spell the end for the Trump administration.