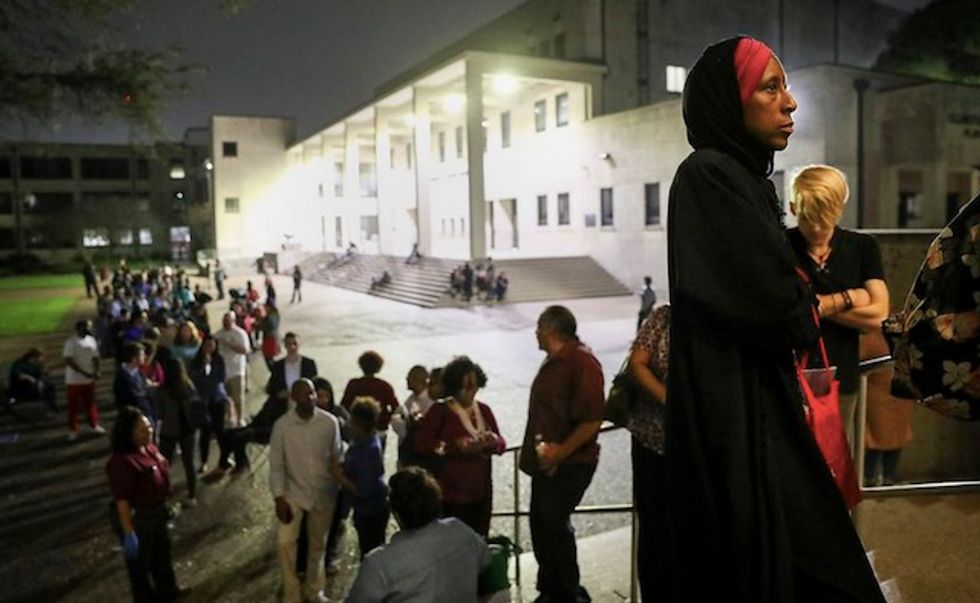 The unusually large voter turnout in Texas has persisted through the first 10 days of the early voting period, leading experts to predict that the state could reach overall turnout levels unseen so far this century.

According to the latest data from the Texas secretary of state, 6.4 million Texans — 37.6% of registered voters — had already cast their ballots through Thursday. Nearly 90% of those have been cast in person. With a full week left, that’s surpassing the total percentage turnout for early voting in 2012, though still a couple of percentage points short of 2016’s early voting turnout. Early voting in 2012 and 2016 had about one less week.

As of Friday morning, more than half of Texas’ counties have already seen a third or more of their registered voters participate. Out of Texas’ largest counties, suburban counties like Collin, Denton, and Williamson are reporting some of the highest turnout rates, surpassing 45%.

At Gov. Greg Abbott’s order, Texas voters have an extra six days of early voting in hopes that the polls will be less crowded during the ongoing coronavirus pandemic. The added time, coupled with a push from leaders in both parties for Texans to cast their ballots early, could be a reason for a boost in turnout so far, experts say.

“It’s a very different election this year because of COVID, concerns with vote-by-mail and other potential shenanigans,” said Michael Li, senior counsel at New York University's Brennan Center for Justice. “I think a lot of people are being encouraged to vote early, so it remains to be seen whether we’re just moving some votes from Election Day to the early voting period or whether it’s a huge overall turnout increase.”

Texans’ voting habits have been evolving over time. Since the 2008 election, more Texans have voted early than on Election Day.

Decision Desk HQ, a company that processes election and early voting results and the provider of The Texas Tribune’s election results data, estimated turnout this year will be anywhere from 10 million to 12 million — the latter of which would be “record breaking” for Texas, according to a spokesperson for the group.

Li, meanwhile, predicted between 11.4 and 11.5 million Texans would cast their ballots by the end of Election Day — about 67% of registered voters. And Derek Ryan, a Republican voter data expert, predicted this week that the number will surpass 12 million.

The turnout appears to be strong among supporters of both political parties. In his popular daily recap of early vote totals Thursday, Ryan reported that voters who in the past have voted in Republican primaries but not Democratic primaries make up 31.3% of the early vote, compared with 26.1% for Democratic primary voters. But because 39% of early voters have no primary voting history, it’s impossible to tell which party is leading in early vote turnout. Texans don’t have the option to align with a particular party when they register to vote.

Still, Democrats have been hailing the numbers as an optimistic sign for their party.

“Texans are casting their ballots and having their voice heard,” said Manny Garcia, the executive director for the Texas Democratic Party. “If every eligible Texan votes, we will win this election.”

“This is pretty unprecedented,” Li said. “The real winner, of course, is Texas democracy. Texas has always been a nonvoting state. So regardless of who the winners of these races are, the real winner is Texas itself.”

Disclosure: The Texas secretary of state has been a financial supporter of The Texas Tribune, a nonprofit, nonpartisan news organization that is funded in part by donations from members, foundations and corporate sponsors. Financial supporters play no role in the Tribune's journalism.