Donald Trump’s campaign is so desperate to raise cash that it’s begun offering deep discounts on the merch it sells. The campaign’s Columbus Day “flash sale” comes amid signs that the campaign could go broke before balloting ends Nov. 3.

“For a limited time, YOU can use code COLUMBUS to get 30% OFF your ENTIRE ORDER,” screamed an email I received over the weekend, the latest in an endless stream of pitches offering Trump goods.

There was a chance to win a signed Trump-Pence football or gain membership in an exclusive “100 club” and other offerings that are unlike anything that any other campaign I know of has ever made.

In just the last month of the campaign, Biden can spend on television and a ground game what Trump’s campaign wasted in the first half of this year.

The 30% discount on routine goods stamped Trump-Pence just three weeks before balloting ends suggests that his campaign ordered a lot more merch than wanted by his eroding fan base.

Those items pitched specifically by email did sell. On Oct. 1 the Trump-Pence campaign sent me and many others this pitch, a curious one given that Trump says he is a teetotaler: 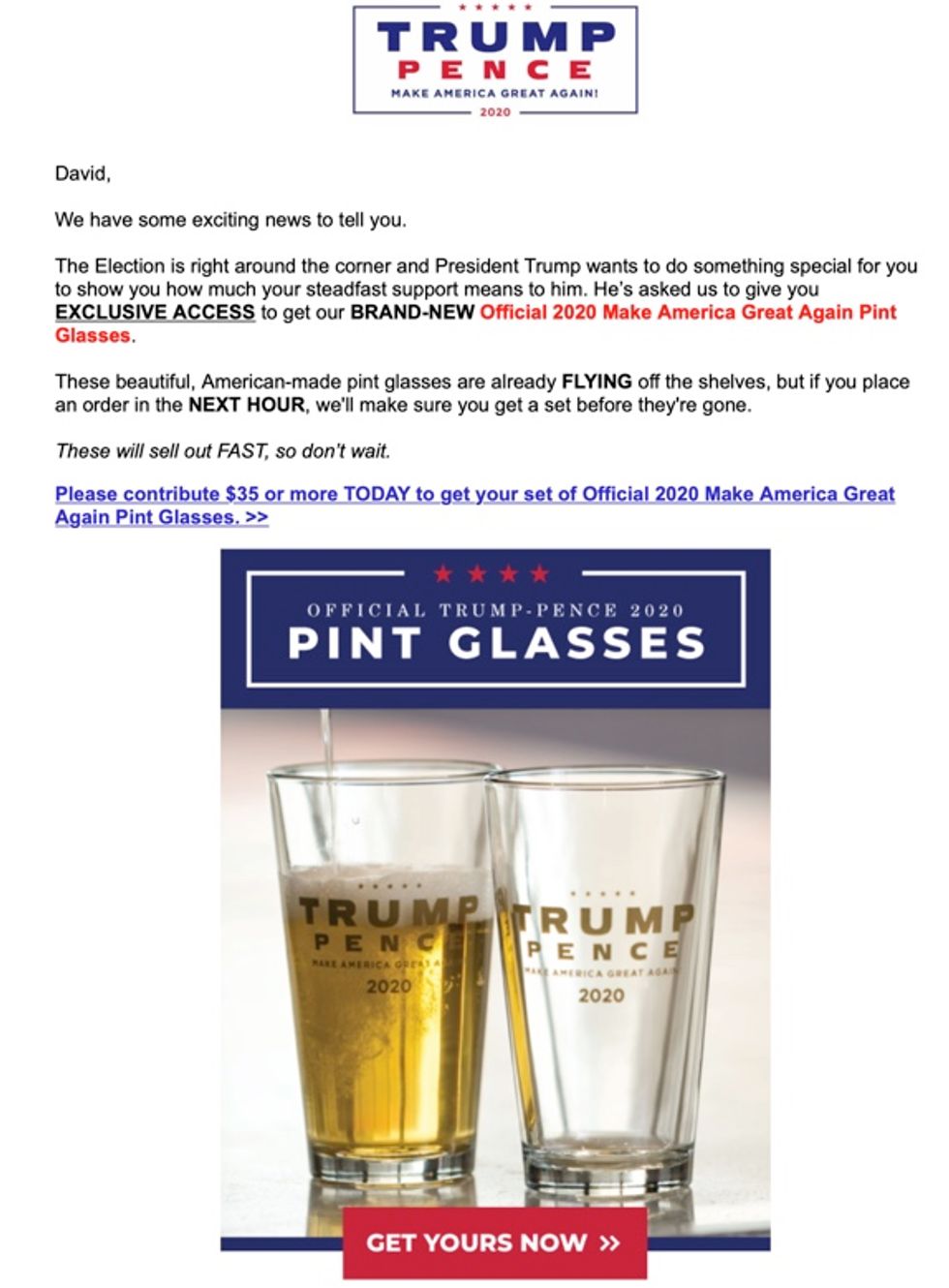 The accompanying email said Trump “wants to do something special for you to show you how much your steadfast support means to him. He’s asked us to give you EXCLUSIVE ACCESS to get our BRAND-NEW Official 2020 Make America Great Again Pint Glasses. These beautiful, American-made pint glasses are already FLYING off the shelves, but if you place an order in the NEXT HOUR, we'll make sure you get a set before they're gone. These will sell out FAST, so don’t wait.” 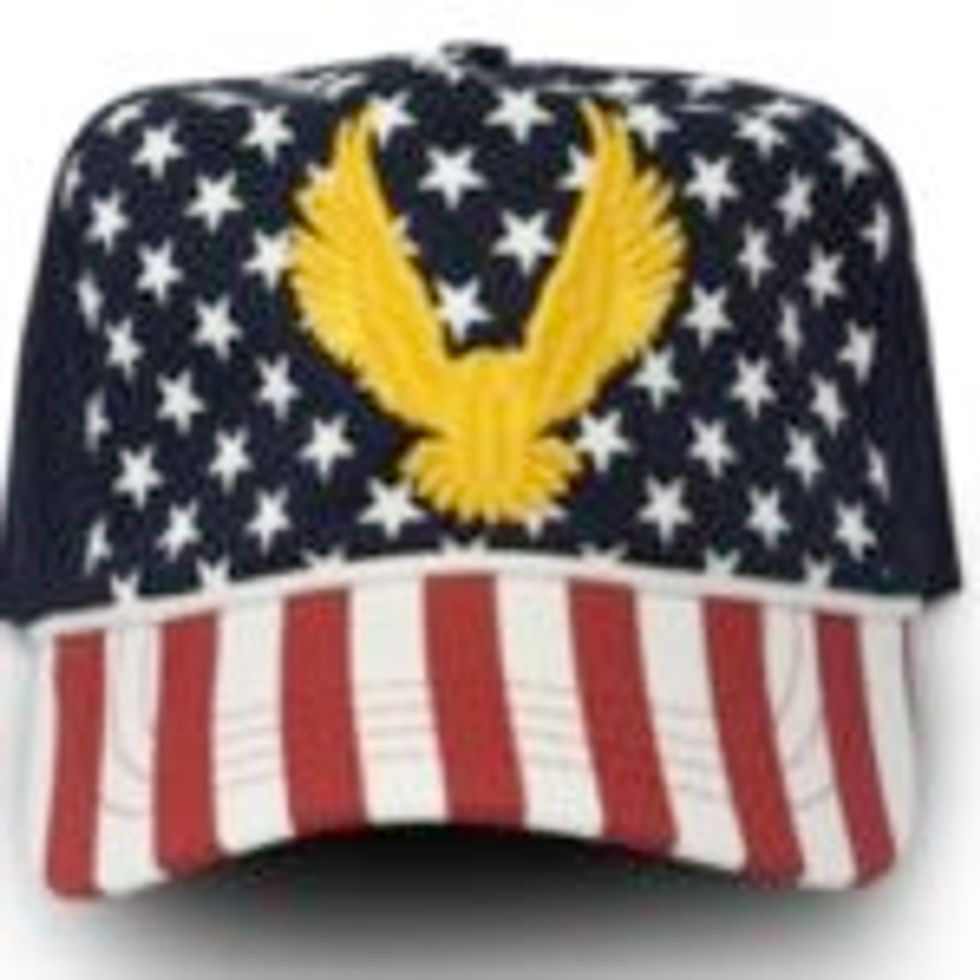 It's hard to imagine anyone gullible enough to believe that malarkey, but those quite ordinary beer glasses sold out in a few days. So did a prissy Trump “freedom hat” pitched in a similar fashion.

But you can still buy Trump-Pence “peaceful protester” women’s t-shirts in sizes up to 3XL for $30 in any color so long as it's white. Plenty more is still available for 30% off including hoodies ($55), MAGA dog collars and a Trump coloring book for kids. At least the coloring book doesn't show Trump in a Superman shirt, which a Trump aide told The New York Times he proposed to wear under his suit when he left the hospital so he could rip off the business attire mimicking Clark Kent. You can't make up stuff like this.

Like the stream of daily emails I get saying I am the “only” person who didn’t respond to a text or how personally disappointed Trump is in me or how he wants me to have an autographed Trump-Pence football, it’s all to scam the people he claims to love. Trump calls them the “poorly educated.” I call them the con man’s marks.

When it comes to campaign raising funds, Trump is turning out to be a big loser compared with Joe Biden. The Trump campaign, the Republican National Committeen and their affiliated fundraising combined raised $210 million in August. That’s a lot of money, though still well below the record set in July 2008 by Barack Obama. Adjusted for inflation the Obama campaign raised $236 million that month.

But Trump’s haul paled next to Biden’s. For each dollar Trump raised in August the Biden campaign brought in $1.74. Biden’s record-breaking August total was $364.5 million.

Neither campaign has said yet how well they did in September. But the Biden campaign, playing smug and coy with The Associated Press, said when it files its report the September number will be bigger than August. That would be two record-breaking months in a row. It also would mean Biden can spend at least $729 million on top of the more than $100 million already on hand. This means that in just the last month of the campaign, Biden can spend on television and a ground game what Trump’s campaign wasted in the first half of this year.

For Trump, the awful truth is that his campaign lacks money for television ads. From the Tuesday after Labor Day through the end of September, the Biden campaign spent $109 million on TV ads. Trump spent just $45 million, NBC News calculated.

The incumbent’s cash has dwindled to the point where campaign staffers no longer fly with their hero on Air Force One. Our government recoups the cost of those seats for other than official business at top drawer charter rates. Instead, Trump campaign staffers now fly commercial in the cheap seats.

Reports filed with the Federal Election Commission contain an astonishing fact that shows just how bad Trump is at handling money. From January through July his campaign and its affiliates spent $350 million to find and develop more donors. That’s nearly half of the $800 million his campaign blew through.

Among the dubious expenses in trying to find new donors was $156,000 for small aircraft to tow Trump-Pence banners above crowds of beachgoers and others.

All that massive spending was a big loser. The revenue raised since July didn’t come close to paying back the investment. And that's despite steadily rising promises of match money. They started out at a dollar for dollar match. Now the email pitches claim if I donate to Trump my campaign contribution will be matched 800%.

That spending was, however, consistent with Trump’s lifelong pattern. Money burns big holes in his pockets. Acquiring a valuable asset that could throw off cash for decades is never interesting to Trump. He prefers to sell out early and pocket instant cash.

Had he hung onto the thousands of apartments he and his siblings inherited from their father two decades ago they would be awash in a forest of greenbacks because that was when our era of rising real estate values and rising rents began.

Alas, Donald persuaded his siblings to sell out before the market rose. Rich as they are, the Trumps would be vastly richer if they had not listened to their profligate brother’s artless deal.

Spending the most doesn’t always result in victory at the ballot box. But the flood of money flowing to Biden and the dwindling sums flowing to Trump tells us one thing. Those Americans voting with their wallets in the last few months overwhelmingly favor Biden.

Bullington claims that the vaccine is dangerous and that masks "trap" the virus that can then shed more efficaciously — neither of which has any scientific basis. He has also said he is "proud of all the Missouri people for standing against" COVID-19 public health efforts.

Missouri has among the lowest vaccination rates in the United States. In the month of July, it ranked worst in hospitalizations nationwide, and is one of three states, along with Texas and Florida, responsible for the most new cases.

When reporters asked Biden about DeSantis' comments on Thursday, he smirked and said, "Governor who?" The short, two-word comment exploded online, with activists encouraging the phrase to trend on Twitter as mockery of the Florida governor.

Sad that #GovernorWho is standing in the way. Reminds me of another governor who stood in the schoolhouse door. https://t.co/hAOpzNRzyi
— Mike Ratrie (@Mike Ratrie) 1628197927.0

@GeorgeTakei Thanks for pointing that out. I wanted to tell #GovernorWho that yesterday.
— John Allen (@John Allen) 1628195651.0

My guess is #GovernorWho will respond by saying something like: "I'm not surprised Sleepy Joe couldn't remember who… https://t.co/H9oJ0uXrQG
— Keith Edwards (@Keith Edwards) 1628196494.0

Shortly after that, Meadows introduced Trump to Jeffrey Clark, the acting DOJ official who would later attempt to get the department to directly intervene in Georgia's certification of its election results.

Skipping ahead to January, the timeline shows that Meadows " arranged and participated in the call in which Trump asked Georgia Secretary of State Raffensperger to 'find 11,780 votes'; and during the call Meadows asked the Georgia officials to share voting data even after they told him they could not because it was protected by law."